An outbreak warning from a decade ago

John Geddes: The 2010 film 'Outbreak'—featuring Theresa Tam—focused on epidemics in Montreal, showing that little of what's happening now is novel 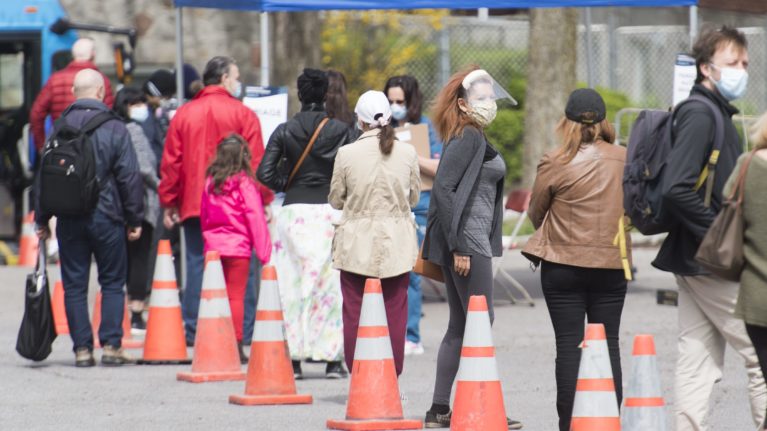 People wait to be tested for COVID-19 at a mobile testing clinic in Montreal on May 17, 2020 (Graham Hughes/CP)

The documentary Outbreak: Anatomy of a Plague, released by the National Film Board in 2010, opens with a tightly edited montage of clips of alarming news reports about infectious diseases like SARS, bird flu and swine flu. A grim-faced George W. Bush even pops up issuing a warning to Americans that evil-doers might unleash smallpox against them. “Our government has no information that a smallpox attack is imminent,” the former U.S. president actually said back in late 2002. “Yet it is prudent to prepare for the possibility that terrorists… would use diseases as a weapon.”

That rush of reminders of fairly recent scares, followed by the flashback to W’s signature fear-mongering, is clearly meant to ratchet up the tension. But then the film introduces a more measured voice. “Large epidemics and pandemics occur on a regular basis through history, and it will occur again—it definitely will,” says a sensible-sounding doctor. NFB audiences wouldn’t have recognized her a decade ago, but she’s a marquee name now. It’s Dr. Theresa Tam, then head of the Canadian Centre for Emergency Preparedness, and today, of course, Canada’s Chief Public Health Officer and a fixture on the daily pandemic updates from Ottawa.

I watched Outbreak recently (courtesy of the NFB, which says it would be too expensive to make the film publicly available again) out of curiosity about Tam’s involvement. It’s not one of those dry, sober docs on a worthy topic. The film toggles dramatically between two scenarios—one historic, the other speculative. The first is a staged retelling of historian Michael Bliss’s celebrated 1991 book Plague: A Story of Smallpox in Montréal, on the city’s 1885 epidemic. The second imagines a parallel outbreak in the Montréal of the early 21st-century.

The idea of setting a solid historical account against a highly hypothetical scenario is daring. But Bliss, who died in 2017, cooperated fully and is one of the main commentators who pops up throughout the film. Jefferson Lewis, who wrote and directed it, told me Tam was also enthusiastic from the outset. “She was a star—she is a star,” Lewis said in a phone interview. “I’m really an admirer of her.” It’s not hard to see what he liked. She is a compelling on-camera presence, conveying that balance of urgency and sensibleness that has become familiar to Canadians over the past few months—even if her shifting stance on wearing masks undermined what might otherwise have been an entirely enviable image.

READ MORE: Why Theresa Tam changed her stance on masks

Outbreak turns out not to be exactly a foreshadowing, much less a blueprint, for what’s happening in 2020. The premise is an epidemic contained to a single city, not a global pandemic. Smallpox was carried into Montréal in February of 1885 by a railway conductor. Bliss chronicled how bungling by authorities, along with popular fear and ignorance, and a few mundane missteps, led to more than 3,000 people dying—most of them children—in that terrible year. “In the buildup to great catastrophes everything goes wrong,” he says in the film. “Small things as well as big things go wrong.”

Without stretching the parallels too far, Bliss’s account of what went wrong in 1885 suggests that almost nothing we’re confronting in 2020—apart from the coronavirus itself—is really novel. For instance, consider the divided media response. In early 2020, U.S. coverage split between reputable journalists trying to report on a dire emerging threat and Fox News personalities recklessly dismissing it. In late-19th-century Montréal, the English newspaper editorials urged vaccination, while the French papers dismissed smallpox concerns as “English hysteria.”

Then as now, vaccination was a fraught topic. The practice began in Britain less than a century before Montréal’s 1885 outbreak, and public suspicion lingered long. In Bliss’s account, the anti-vaxxers of the 19th-century make today’s nutbars seem mild-mannered by comparison. He tells of mobs rioting outside city hall when Montreal’s health authorities tried to halt the epidemic by making vaccination compulsory. And then one of those big things that Bliss speaks of went wrong: a batch of smallpox vaccine material was, in fact, contaminated.

That lead to the vaccination program being suspended. Many children died as a result. The episode made me think about the current push to develop a vaccine for COVID-19. How far should scientists go in rushing the usually ultra-cautious process for testing vaccines meant for mass inoculation programs? The Montréal history lesson shows how any mistake might validate bogus anti-vaccine sentiments. And those 1885 riots made me wonder how a compulsory coronavirus inoculation campaign today, assuming a vaccine is finally developed, will be greeted by those primed to doubt and fear science.

The film also highlights the underlying social and economic realities that can mean one person lives and another dies. Around the world, poor people surviving in crowded conditions are at far greater risk in today’s pandemic, just as the children of Montréal’s crammed 19th-century tenements were the main victims in 1885. Back then, Montréal’s smallpox hospital was a nightmare, just as the some of the city’s long-term care homes proved to be in 2020. Failure to properly fund and regulate institutions hasn’t stopped being a source of deep shame.

On the tactical response to an outbreak, Montréal failed to isolate infected individuals in 1885—with horrific consequences. Tam explains in the film that “search and contain” is the core of Canada’s plan for a 21st-century epidemic. Infected individuals would be quarantined, and everybody they might have infected tracked down. “So you need to know all the different contacts the case may have,” she says, “and public health would need to chase all those contacts.”

But, as we continue to discover, insufficient capacity in most provinces to do enough testing to identify cases, along with lagging ability to follow up by chasing down contacts, remain major shortcomings of Canada’s response more than three months into this year’s pandemic.

The then-and-now parallels suggested by Outbreak, however, are ultimately less telling than some broader points Bliss and Tam return to repeatedly. After all, Outbreak focuses on smallpox, a disease declared eradicated by the World Health Organization in 1980. So Tam tries to widen the perspective. “I think that infectious disease of various descriptions is very likely to keep coming and coming,” she says. “So, rather than just disease-specific plans, we have to have sort of all-hazard infectious disease response as well.”

A decade later, nobody is seriously arguing that Canada, or for that matter the world, was ready to respond to all hazards. Bliss wouldn’t have been surprised. Near the end of Outbreak, he drives home the doleful point that with every new deadly virus—from terrible experiences like AIDS to near-misses like SARS—we seem to need to learn the same hard lessons all over again. It would be reassuring to suppose that the unprecedented scale of the COVID-19 experience means next time will be different.