Andy Murray wins and Britain breathes a sigh of relief 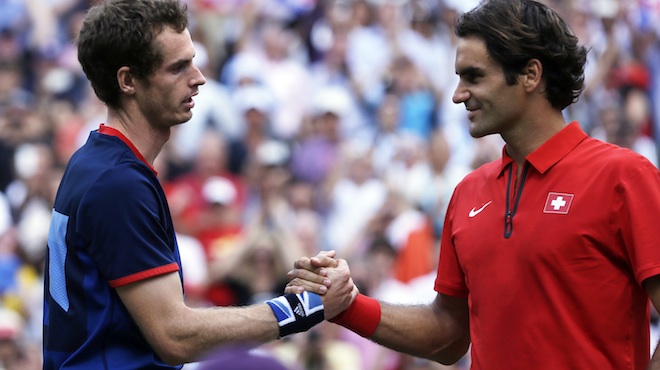 The streets of London were awfully quiet for a sunny Sunday afternoon. The tube was almost empty. But the pubs were full. And even more so for those with TVs.

Andy Murray, the country’s great tennis hope, and serial disappointment, was playing in the gold medal match against Switzerland’s Roger Federer. A guaranteed silver, with gusts of hope towards gold. But with the 25-year-old Scot, it’s never a sure thing. Ranked number four in the world, he has been knocking on the Grand Slam door for years now. He’s made four of the big boy finals since 2008 and lost all of them—one to Novak Djokovik, and three to Federer. And the most recent heartbreak had come less than four weeks ago, on the same grass centre court at Wimbledon, a four-set defeat at the hands of a certain Swiss tennis ace.

At the Earl of Camden, a rather hip joint near Regent Park, there was an air of anticipation—and unease. Even when Murray took the first set 6-2 in a brisk 40-minutes, the worries didn’t dissipate. It wasn’t until the second set, that the punters started to believe. Serving in the third game, Murray was pushed to the breaking point six times by his Swiss rival and somehow survived. “Federer threw everything he had at him and Murray resisted!” the BBC commentator exulted. “This is the day.” Then the lanky Scot went on to win the set 6-1, and the frowns in the bar turned to wide grins.

By the third set even the kid with the pierced lips and the Mohawk was riveted to the screen. So too with his girlfriend with the sleeve of tattoos and the leather pants. The Earl’s vibe is a little too cool for school—gourmet fare, free WiFi, a decent wine selection—but the Olympic effect was obvious. Union Jack pennants strung from the ceiling, the five-ring flag behind the bar. And later in the week, it will host its own endurance challenge; a hot dog eating contest. It costs 5-pounds for a go at the top prize of a 40-pound bar tab, and proceeds to the local children’s hospital.

As Murray sliced his way through the third and potentially deciding set, people began to walk in off the street and linger in the doorway, staring at the TV. The crowd clapped and cheered for every one of their hero’s points, and let forth disappointed groans on the rare occasions that Federer scored. There was a break in the action when Murray was just a game away from greatness. On the court at Wimbledon, its baseline worn bald, he sat in a chair looking sweaty and anxious. Federer, all in red, was hardly perspiring. But for perhaps the first time in his life, he looked beaten.

“He can win at the very highest level,” proclaimed the very relieved BBC announcer. “He can walk through the door. It’s nonsense. There’s no room for self doubt.”

The crowd at the Earl screamed and clap. During the medal ceremony a few minutes later they even took a stab at singing along with God Save the Queen. (Although all this national pride and excitement is starting to feel a bit forced after seven gold medals in just the last two days.)

Then they went back to their pints. Content that the heartbreak kid is finally a champion.