Are Baby Boomers the suicide generation?

Pondering his brother’s death, an author asks if Boomers are pre-programmed to end their own lives in his new book, 'To The River: Losing My Brother' 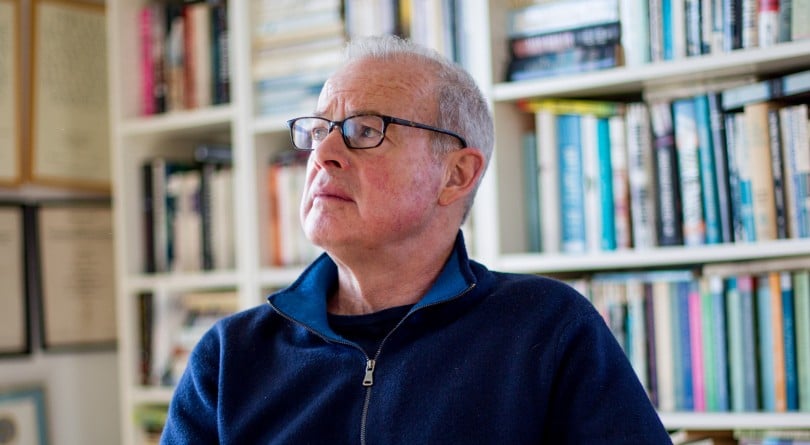 It’s likely the tide is still far from cresting. That’s among the more certain news from the not-so-far country of suicide, where Don Gillmor has spent so much time in the 13 years since his brother, David, died by his own hand. Not as a citizen like David, but as a sojourner, someone trying first to understand his brother’s choice, and, later, their generation’s choices. Even for one of Canada’s more admired writers—Gillmor, 64, is the author of critically acclaimed novels and award-winning journalism—it was a painfully difficult process, and not just because of the personal loss.

The more Gillmor immersed himself in the vast literature on suicide, the more opaque the subject became. In the end, the book that grew out of his explorations can be described in terms the author applies to himself in it: “a wraith drifting around the suicide world.” To The River: Losing My Brother is haunting, beautifully written and rightly hesitant about any certainties regarding an act as ultimately unknowable in social terms as it is in individual decisions. Perhaps the clearest signal to emerge reveals the striking openness of the Gillmor brothers’ generation, the Baby Boomers, to the idea and act of suicide, even during the years of their lives when previous (and succeeding) generations have shown lower rates—meaning that as Boomers move into old age, when every generation shows a spike in numbers, the floodgates may open.

“It was a hard time and a long time writing this,” Gillmor recalls in an interview, but “now I think I’ve explored it as far as I really can.” Like many surviving family members, Gillmor “didn’t for a long time know what to say to anyone about David’s death,” but once he wrote a three-part series for the Toronto Star, others opened up to him about their family or personal stories. He has now known eight men who have killed themselves and three people, two of them women, who have attempted it. That fits one of suicide’s well-known patterns: more women attempt it, while men, primarily because their means are often more lethal (firearms), make up 80 per cent of the deaths.

But patterns abound in suicide. Depression is known to be involved in half the attempts and is suspected in many more; substance abuse is prevalent; the unmarried and less educated make up a disproportionate percentage; the wealthier the country, the higher the rate; and the same goes for the higher the latitude. Some professions display particularly elevated rates, including dentists, doctors and—an old, old story—writers, from Virginia Woolf (who walked into the River Ouse with her pockets full of stones) to Ernest Hemingway to David Foster Wallace. Yet the patterns do not form an overarching theory, and their predictive power borders on nil. The recent trend in suicide studies to focus on the moment, to ask survivors what they were thinking when they veered the car toward the concrete wall, drew the knife across their wrists or swallowed the pills, has disappointed pattern-seeking researchers. Suicide notes, the testaments of people agitated and/or depressed, are often studded with prosaic details (“Don’t forget to feed the dog”) and not very informative, even on a personal level.

When Gillmor attended one of the many suicide conferences that dot the calendar, this one in the suicide magnet of Niagara Falls, the keynote speaker—David Lester, the author of more than 100 books and known as “Mr. Suicidology”—began his remarks with: “We really have no idea why people kill themselves.” Later asked by Gillmor if he would continue his research in retirement, Lester, 72, replied, “I’m quitting cold turkey. I’m putting it all behind me.”

That was more than Gillmor could do, even as he came to share Lester’s conclusion in the wake of his brother’s death. At age 48, in December 2005, David Gillmor parked his truck 30 km south of his Whitehorse home and walked into the Yukon River, not to be found for six months. A river—sometimes the Red River of the Gillmors’ Winnipeg childhood, sometimes the Yukon, most often a conceptual river of life, death and time—runs through Gillmor’s book. There is their mother’s warning to stay away from it; Winnipeg’s collective memory of the Great Flood of 1950—before the boys were born, but hanging perceptibly over their childhood—when 100,000 residents were forced from their homes; what Gillmor calls David’s “curious” choice for the means of his death; the book’s conclusion, where Gillmor and his two teenaged children walk along the Red River. And in particular, the book’s evocative opening, as one brother imagines himself into the other’s mind: “The distance to the open water is shorter than you think . . . There are no thoughts left, only a faint melody. You take one more step and the river carries you away.”

MORE: How AI is helping to predict and prevent suicides

Gillmor was in Whitehorse the following June—when the body was found kilometres downstream—already convinced of his brother’s suicide and trying to piece together not only David’s last days, but his brother’s whole life. Gillmor began to question everything he thought or remembered or thought he remembered about their childhood. “You know,” he says slowly, “you have your own memories of childhood, and who knows how accurate they are, but they do get cemented. And they’re so rich in detail that they convince you this is absolutely what happened. My memory is of this really quite idyllic childhood. Our sister—who lives in Winnipeg, not far from our old home—and I basically tried to recreate that world in adulthood.” But was David’s memory the same? “He did move as far away from it as possible, and I think there is something in that. My father, who has an incredibly logical, mathematical mind, went back to the photos from our childhood and noticed that David was never smiling, which led him to believe that his death was something ingrained in him,” a thread of explanation for a son without known depression or major substance abuse issues. “But as with so many suicides, there are all kinds of theories, and not much hard data.”

What Gillmor found, poking in the ashes of David’s life, was contradictory and frustratingly indeterminate. David, who had one child he did not see very often, was recently remarried. His wife insisted he was clean, sober and faithful, but a bandmate told Gillmor his musically talented brother was “regularly getting high and sleeping with whomever he could.” (The autopsy showed traces of alcohol and cocaine.) An old girlfriend told Gillmor about a previous suicide attempt, unknown to the other Gillmors, while Gillmor reconsidered his brother’s intense aversion to boredom, to the prospect of unfilled minutes stretching into the future. David had been about to start a new job managing a store, meaning more economic security but less freedom than playing in a band. When another friend noted that David simply didn’t like anything that wasn’t easy, Gillmor recalled their childhood and agreed. “There is truth in that. He did have this incredible gift for music, but he wasn’t a kid who sat down to practise three hours a day. He just went off on his own, and as soon as things got difficult he went off somewhere else.” Gillmor had always thought his brother a born runaway. Had he decided to make his final escape?

Then there was David’s place in his age cohort. For all Lester’s pessimism, researchers still search for patterns, with many focusing on a new pebble in the mosaic. The suicide rate for Baby Boomers is 60 per cent higher than for their parents’ generation, and higher, so far, than the generations after their own. Historically, adolescence and old age were suicide’s fertile times, and mid-life its lull. Not anymore. For the past decade, experts have explored the spiking suicide rate among middle-aged Boomers. Socio-economic explanations dominate their discourse: Boomers have high divorce, family breakdown and substance abuse rates; a high incidence of depression (or perhaps a willingness to talk about it, an openness not shared with their parents’ cohort, the aptly named Silent Generation); and an intense sense of entitlement that many experts believe results in feelings of comparative disadvantage. The less-educated suffer from the offshoring of jobs and, in the case of men, from what Gillmor sums up as an “increasingly blurry definition of what it means to be male.”

READ: Debunking the myths you think you know about baby boomers

It all sounds reasonable, if depressing, when plotted against recent economic crises, as does the associated idea that the Boomer contagion hasn’t spread to the generations after because, as Gillmor sardonically puts it, “they were born to it—they expect their parents to get divorced and to have seven different jobs and probably not own a house.” But that explanation centres on middle-aged Boomers in the recent past, and misses the big picture. Even in the optimistic days of their youth, 20-to-24-year-old Boomers had a suicide rate triple that of their parents at that age. “It raises the question,” says Gillmor, “are we Boomers just pre-programmed? Not to mention, what’s next? I was at a friend’s birthday party a few weeks ago, and I ended up in three conversations about assisted dying. What will happen with us in 15 or 20 years, as we move into ages that have historically had a high suicide rate in every generation? I think the assisted right will be broadened, and I think that if that process takes too long, we won’t bother waiting. As soon as we forget the car keys two days in a row, we will take care of it ourselves.”

Suicide is already hovering between an option and a right in our society, Gillmor believes, and it’s moving toward the place already occupied by assisted dying. The idea is now embedded. Gillmor was surprised, after people began baring their souls to him, that far more of them than he expected “had some sort of Nietzschean idea that suicide is this comforting, ‘I can always kill myself if things get really bad’ companion that goes everywhere with you.”

Soon, those thoughts will be more openly expressed and there will be no acceptable language to counter them. The negative constraints on suicide are gone, from the ancient laws that mandated—“with a fair degree of irony,” Gillmor notes—the execution of attempted suicides, to the refusal to make life insurance payments to the heirs of those who died by their own hand. And gone, too, for much of the Boomer generation, are the less tangible positive constraints, moral and religious. “Whatever responsibility my Scottish Presbyterian grandmothers would have felt to stay alive under any circumstances,” says Gillmor, “we don’t carry anymore, except, perhaps, parenthood. That’s the last line for people to cross, to leave their children. Except, of course, people do that all the time.”

If David Gillmor was, in the words of his brother, “a quintessential Boomer” in his flight from difficulties and his dedication to sex, drugs and rock ’n’ roll—that is, to dragging his youth as far into middle age as he could—then perhaps he was also emblematic in his readiness to choose his exit to suit himself. It’s impossible to say with certainty. Worldwide, a million people end their own lives every year. If suicidology has one sure conclusion, it’s that at least a million reasons are involved.