Assisted dying was supposed to be an option. To some patients, it looks like the only one 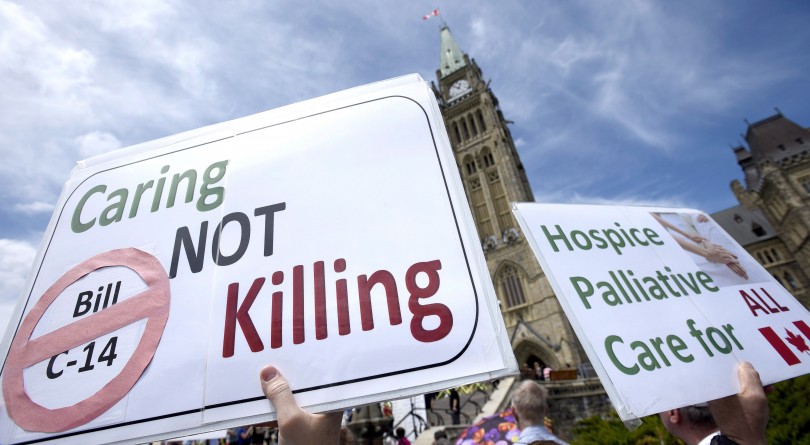 People rally against Bill C-14, the medically assisted dying bill, during a protest organized by the Euthanasia Prevention Coalition on Parliament Hill on Wednesday, June 1, 2016 in Ottawa. THE CANADIAN PRESS/Justin Tang

Peter Stockland, a former editor-in-chief of the Montreal Gazette, is publisher of Convivium, an online forum for faith-based debate on public policy and social issues.

Canadians were asked in 2016 to accept what is now called Medical Assistance in Dying (MAiD) as standard practice in the health-care system. But as the second anniversary of the federal law sanctioning assisted suicide passes this month, ambiguities embedded in the new regulatory regime are turning end-of-life care into a troubling leap of faith for doctors and patients alike.

Even the Collège des Médicins in Quebec, which sped ahead with its own statute in advance of Ottawa’s Bill C-14, has sounded a strong warning note about patients “choosing” medical assistance in dying purely because their preference for palliative care isn’t available.

“End-of-life care cannot be limited simply to medical assistance in dying,” Collége President Dr. Charles Bernard writes in a May 29 recently published letter to provincial Health Minister Gaétan Barrette. “That option makes no sense, from a medical point of view, unless it is part of a robust and complete system of palliative care in Quebec.”

Yet provincial foot-dragging on plans to substantially expand palliative care services is actually denying patients the very choice that was promised in the shift to MAiD, and making it increasingly problematic to discern which patients truly wanted to have a doctor deliberately end their life, Bernard says.

“In certain identified cases, patients, for the lack of (palliative) care, might have had no choice but to ask for medical assistance in dying to end their days ‘in dignity,’ which deeply concerns us,” the Collège president tells the minister.

RELATED: A CMA doctor on the burdens and ethics of assisted death

Worse, he adds, the Collège has been hearing increasing concerns from its member doctors about re-direction of already scarce resources from palliative care to medical assistance in dying, which risks a violation of both the letter and the spirit of Quebec’s law governing end-of-life care.

At the other end of the country in British Columbia, an active proponent of MAiD, acknowledges that she, too, struggled to adapt to the vagueness of the federal law. Dr. Ellen Wiebe says she ultimately concluded she would have to rely on her personal best judgment about whether or not to administer death. Neither the re-written federal legislation, nor provincial regulations that followed it, define with clarity when a patient can receive MAiD, she says.

At the same time, Wiebe believes wholeheartedly that any mentally competent person who requests medically assisted death for the relief of suffering has a right to receive it. And suffering, she says, is a subjective judgement for the patient to make. The result, she says, frequently leaves her working “at the edge” of the law.

A prominent voice in the Dying With Dignity movement, Wiebe says when she undertook training in the Netherlands for administering euthanasia, she saw the issue as one of a clear-cut human right to autonomy. Falling back on personal judgment felt paternalistic to her. Leaving it to the personal judgment of some professional authority—even a doctor like herself—felt like interference in a fundamental human right to die when one chose.

“Then when I started doing it, I realized that I personally must be convinced in each case. I provide what is right up to the edge of the law, and never beyond, of course. I’m working beyond where some providers would work…it varies on how risk-averse people are. We have to submit 17 pages of paperwork, and we are being scrutinized line by line.”

She acknowledges, however, that the line, or edge, has already shifted significantly since she provided her first medically-assisted death in February 2016. (That was four months ahead of the law being changed to make it legal, but Wiebe notes she had judges’ approval to proceed.) Part of the challenge is the federal legislation now permits—or limits, depending on perspective—MAiD to when death is in the “foreseeable future” but does not clearly define what that means.

RELATED: Should mentally ill Canadians have access to assisted dying?

Wiebe says the personal definition she initially worked from was based on testimony federal Justice Minister Jody Wilson-Raybould gave to the Senate on June 1, 2016. Kay Carter, the central figure in the 2015 Supreme Court decision that led to the overturning of the old law, would qualify under the “foreseeable future” wording, according to the justice minister.

In her testimony—two weeks before Bill C-14 became law—the minister said the legislation was “carefully crafted” to give “purposeful flexibility” to doctors. It did not set time limits or require proof of a “causal relationship between any single medical condition and the foreseeability of death.”

Wiebe notes that Kay Carter was 89 when she died, and had suffered from spinal stenosis, a painful though non-life threatening, condition. Her life expectancy would normally have been about five years, she says, adding: “If that was natural death in the foreseeable future according to our justice minister, then that was good for me.”

But just over a year later, in June 2017, Ontario Superior Court Justice Paul Perell ruled in a case called A.B. versus Canada that a 77-year-old who suffered from inflammatory arthritis faced death in the “foreseeable future” and was eligible for MAiD even though, as Wiebe points out, the woman’s life expectancy was about 10 years and she was still an avid hiker.

Wiebe says she adjusted her personal judgement accordingly, though she remains “very, very careful” in such cases where pain relief is the primary objective and non-terminal conditions are involved. She is confident the oversight system of the B.C. coroner’s office and the province’s College of Physicians and Surgeons acts as an effective public safeguard. “I expect,” she says, “to be scrutinized.”

But B.C. Conservative MP Mark Warawa wonders where that scrutiny and those safeguards were last January when Wiebe entered a Vancouver Orthodox Jewish nursing home and administered medical aid in dying to an elderly patient even though the facility didn’t allow MAiD and Wiebe didn’t have visiting privileges there. Administrators at the Louis Brier Home accused her of “sneaking in and killing” the patient.

Wiebe emphatically rejects suggestions of wrongdoing. On the contrary, she says, she works within the law to protect the rights of patients to receive MAiD whether or not the facility permits the procedure.

“To me, places don’t have moral rights. Places don’t have consciences, only people do. It’s not just any place. It’s [the patient’s] home. Someone [denying MAiD] is taking [a patient’s] rights away to die in their home. That’s why a place should never have rights.”

Warawa says the fact there wasn’t a criminal investigation is troubling enough. The current law allowing MAiD is due to be reviewed by 2021. How can any such review of Bill C-14 be meaningful, he asks, when existing legislation apparently isn’t being enforced in cases such as Wiebe’s?

“In my opinion, Ellen Wiebe broke the law, and the police should have been involved,” says Warawa, who sat on the special legislative committee that held hearings into C-14 before its passage. “I respect that people now have the right under the law to end their life prematurely through assisted suicide. But as a legislator, I think it would be a horrendous mistake to even consider expanding it when we aren’t upholding what already exists.”

Echoing the concerns now being voiced by doctors in Quebec, Sarnia-Lambton MP Marilyn Gladu is most concerned about the detrimental effects on palliative care that might come from the rising clouds of confusion around MAiD. Gladu achieved the remarkable feat in late 2017 of having her private members bill adopted unanimously by both the House of Commons and the Senate. The bill binds the Liberal government to having in place a framework for palliative care by December of this year.

But it took six months for the health minister to open a promised nation-wide consultation to get consistent palliative access. And Gladu still doesn’t know if the minister has made good on a commitment to consult with her provincial colleagues. She also points out that the word “palliative” was mysteriously absent from the recent federal budget, though Health Canada says that since 2017 federal government has committed to giving the provinces $6 billion over 10 years from a combination of homecare and palliative care, along with another $184.6 million for home care and palliative care in Indigenous communities.

RELATED: Why the term ‘death midwife’ has actual midwives up in arms

All that would be disconcerting enough for Gladu. It’s made worse at the provincial level B.C.’s NDP government has mandated that MAiD be made available in all hospices and palliative care centres that receive 50 per cent or more of their funding from tax dollars.

“That is a really bad idea,” Gladu says. “People doing palliative care don’t have the same experience as people doing medical aid in dying. They’re not as familiar with the requirements.” A new standard recently issued by the Nova Scotia College of Physicians and Surgeons would allow paraplegic patients to receive MAiD if they’ve refused the treatment and medicine necessary to prevent bedsores.

“Clearly, that is not the intent of the legislation,” Gladu says.

Gladu adds that a highly probable unintended consequence will be to frighten patients away from palliative care and leave them, as Quebec’s Collège des Médicins is now warning, believing the “choice” of medical aid in dying is the only real option they have if they wish to die with dignity.

That would be a troubling example indeed of good faith requiring blind faith to ignore a looming hard fall for Canada’s public health care system.