A long-haul trucker, he overcame addiction and became a friend to whom countless other addicts turned in their darkest hours 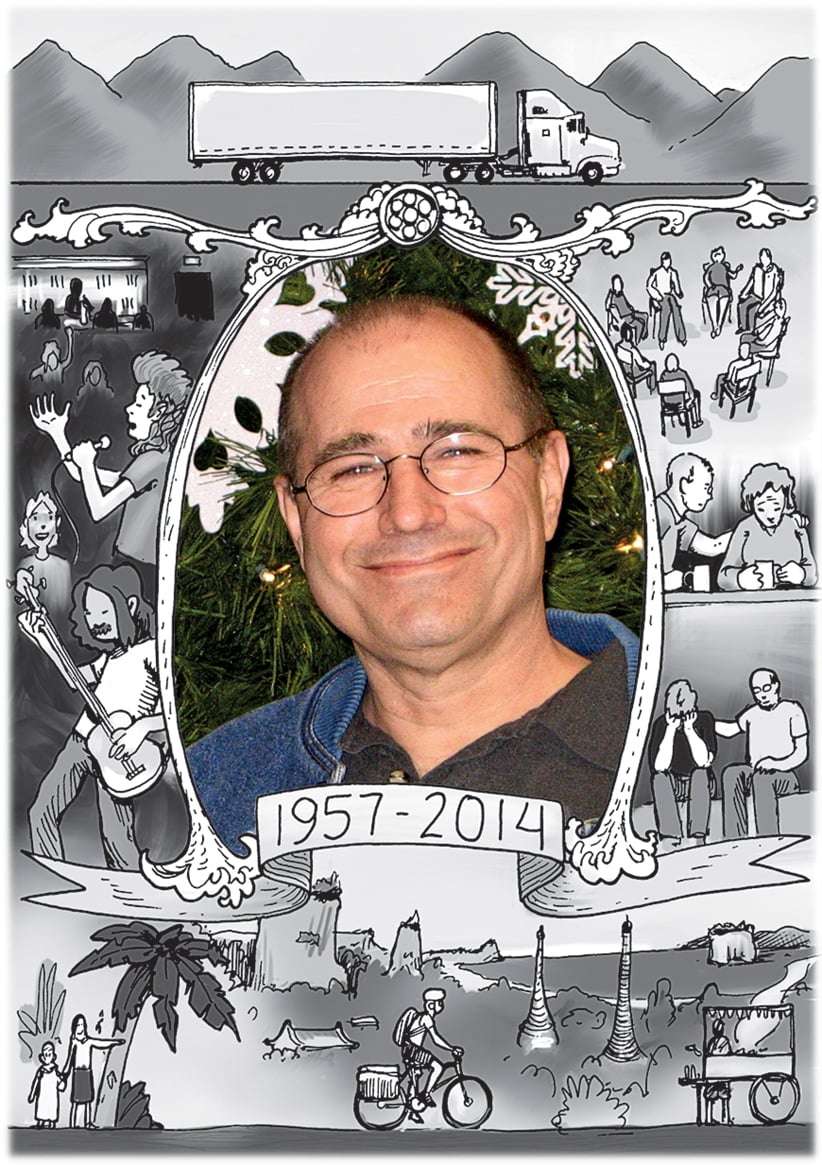 Barry Douglas Johnson was born in Winnipeg on June 13, 1957, to Gordon, the owner of a successful construction supply business, and Lois, a homemaker. The couple had three children, starting in 1952 with a daughter, Karen, then a son, Bruce, two years later and finally Barry.

When younger, the Johnsons took their children on vacations to dude ranches where they rode horses and herded cattle for fun. “Barry was a happy kid then, always making faces,” says Karen. Like his brother Bruce, Barry played hockey in his teens. Bruce, smaller and faster, was talented enough to play semi-pro. Barry was a slower skater, but a fierce defenceman, often cleanly checking opponents right over the boards. “He just crunched you,” says Bruce. Like Bruce, Barry was invited to the Brandon Wheat Kings camp. At 16, it was a big achievement, but Barry didn’t go. “He just didn’t have the confidence then,” says Bruce.

Barry’s confidence had fallen with his grades in high school. (It wasn’t until much later in life he found he had a serious learning disability.) He became a partier and drinker, quitting school in Grade 10, and leaving home at age 16. “It was not a good scene at all,” Karen says of the ensuing period in his life.

Barry befriended numerous Winnipeg bands, including Streetheart and Harlequin. He wound up working in clubs and, considering his hockey past, it was no surprise he started as a bouncer. Later, he would manage several bars. Barry managed bars well, but not his drinking and drug use. One night in his early 20s, he and some friends were in a serious car crash while out carousing. Barry was thrown through the windshield, his arm speared by a windshield wiper. It didn’t teach him the lesson his family hoped it would. “He just felt he had defied death, that he was invincible,” says Bruce.

Meantime, Bruce and some partners started the Marble Club, a popular Winnipeg nightspot in the late ’80s. Barry eventually became the manager, but was fired after a year. “It was one of the hardest things I ever did,” says Bruce, who worried about his brother’s drinking and drug use. But soon after, Barry phoned to say he was joining Alcoholics Anonymous. He did, on March 26, 1991, and he followed AA’s 12 steps to the letter. “He really believed—he wasn’t a religious person—but he believed strongly a higher power was influencing his life,” says Karen.

Sober, Barry sought work outside the bar scene. He had a short stint working with troubled teens at Macdonald Youth Services in Winnipeg. Though kids liked him, their stories of abuse and hopelessness devastated him. In 2000, in his early 40s, Barry went into trucking. His father helped him prepare for his Class 1 licence test. Barry loved the open road, and spent the next 15 years as a long-haul trucker, driving throughout Canada and the U.S.

When back in Winnipeg, he loved riding long distances on his bicycle around Winnipeg’s Perimeter Highway or participating with Bruce in the annual 170-km MS Bike Tour from Winnipeg to Gimli. But much of Barry’s free time was devoted to helping hundreds of AA newcomers. “He was the friend that many people turned to in their darkest days,” says his friend Kerry Swan. The Johnson siblings had regular Sunday dinners at their parents. Often, Barry “would leave dinners early if someone was in crisis,” says Karen. He didn’t talk much about his mentoring role, though friends say he saved dozens of lives. “We probably knew a tenth of what he did for people,” says Bruce.

In recent years, Barry started travelling for fun, not just for work. In 2011 Barry took his first trip to Thailand, riding his bike across the country. He returned the following year, staying for months, and collecting a menagerie of international friends. To afford more travel, Barry figured he could earn better pay driving in Alberta. But he discovered he needed his Grade 12 to work there.

It came as a relief to Barry when he was finally diagnosed with a learning disability. “I’m just so happy I wasn’t dumb,” he told his family. Last year, with the help of a good tutor, Barry got his GED.

On Dec. 16 in Winnipeg, Barry was hauling a load of scrap rail lengths on a flatbed when he braked hard to avoid a multi-car collision just ahead of him. Part of the load crashed through his cabin, killing him instantly. He was 57.