Beach Volleyball: The antidote to dressage

Fans don't know a bump from a bumper, but they clearly enjoy themselves 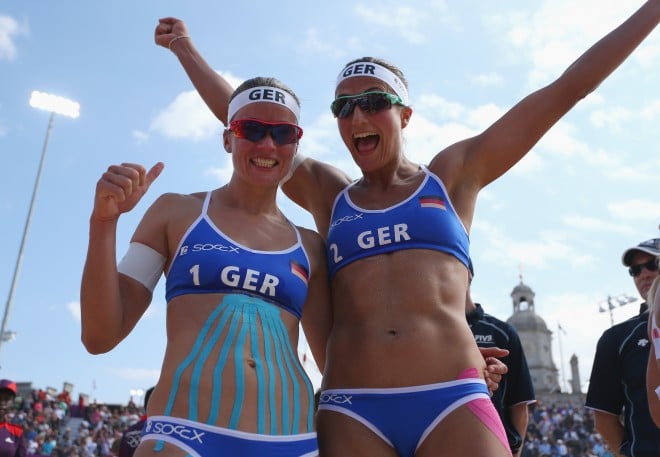 There has never been an Olympic venue like London’s Beach Volleyball court. Parked in the middle of the Horse Guards Parade—where the Queen’s birthday is celebrated in the Trooping the Colour ceremony every June—it’s right off St. James’ Park and close enough to Buckingham Palace that Liz can probably hear the cheering. From the stands you can see the top of Big Ben and the London Eye Ferris wheel. Military brass bands tootle past outside. And overhead, jumbo jets trace their way down the Thames to Heathrow. It feels like you’re sitting at the very heart of the British Empire. Until you look down and see the women in bikinis.

Rock music blares in 10-second snippets between points. Pump it Up, by Elvis Costello. The Beach Boys’ I Get Around. Blur’s Brit-pop classic Song 2, gets the capacity crowd Woo Hoo-ing along. During longer breaks in the action a team of swimsuit clad male and female cheerleaders take to the sand to dance, doing the Conga along with the Miami Sound Machine, and then transitioning into the bane of 90s weddings: The Macarena.

But as incongruous as it all is, it works. The crowd sings, dances and cheers. For set and match points they’re on their feet roaring. And despite the fact that most them couldn’t tell a bump from a bumper, let alone explain the scoring system, they are clearly enjoying the hell out of themselves. It’s like the Olympic’s apology for all that Skeet Shooting and Dressage. A cheese-filled, frivolous wrapping for some serious athletic competition and dedicated athletes.

Canada’s women’s team, Marie-Andree Lessard and Annie Martin, bowed out of the competition this morning in an entertaining battle with the Italian squad, winners of Pool F. After losing the first game 21-12, they fought off four match points to come back and win the second. But in the third and deciding game the Italians proved too strong, triumphing 15-10.

Afterwards, looking sandy and spent, rather than “glistening like otters” as London’s Clown Mayor Boris Johnson wrote in one of the local dailies this week, the pair announced their retirement from the sport.

“We’re walking out with our heads held high. This is it,” said Lessard. The 34-year-old, who has devoted the last 18-years to volleyball, says she’s going to cherish every moment of her first, and last, Olympics. “It’s amazing. The crowd has been so supportive. Maybe it’s the Commonwealth factor. They were so loud.”

For Martin, who competed with a different partner in Athens, it was even more emotional. The road to London was potted with setbacks—funding challenges, injuries, and personal sacrifices. “Volleyball brought so many things to me from the inside,” the 30-year-old said, wiping away her tears. “I’m so grateful to finish my career here in front of all those people cheering.”

When the Olympics are done, the sand from the court is going to be distributed to schools and playgrounds across the city, as one of London 2012’s “green initiatives.” And within a few weeks, all traces of the venue will be gone. But Martin and Lessard will always have one claim to fame. They experienced a true bit of summer in wet and gloomy England.