How 'blue zones' offer secrets for long lives—and shorter ones, too

Pockets of centenarians have been revealing clues for living longer. Now, those areas' next generations are teaching us how to mess it all up. 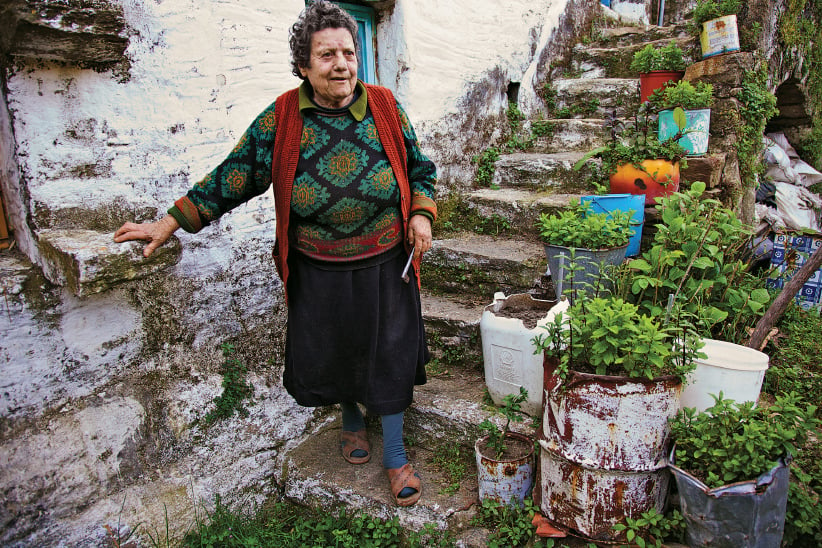 A woman outside her home on Ikaria Island. (Gianluca Colla/National Geographic/Getty Images)

When scientists discovered the “blue zones” a few years ago—four isolated geographic areas where people were living beyond the age of 100 at up to 10 times the normal rate—they wondered if they might have found the underpinnings of the fountain of youth. Surely the DNA of these centenarians, or their lifestyle, or their food sources, held answers for us all.

Now that the scientific papers have been published and the fanfare faded, sombre news is emerging. It seems that some of these small pockets of longevity are dying out, as the newer generations’ Western-influenced lifestyle and diet translates into poorer health and lower life expectancy.

Back in 2000, Michel Poulain, a Belgian demographer, had just finished confirming, one by one, the age of centenarians in Sardinia, Italy, when he realized that “these centenarians are concentrated in one area.” He grabbed a bright turquoise blue marker and circled the villages where he’d found centenarians, literally putting the first “blue zone” on a map.

He has since become, in his own words, “the guarantor of the validity of longevity,” travelling the world to find and scientifically validate longevity zones. He needs reliable records to verify that every centenarian is truly 100 years old or more. He then calculates the centenarian rate, measuring their concentration in a geographic area: one Sardinian village of 3,000 people had 42 centenarians in the past 30 years, he says, whereas the average Belgian village of the same size had “maybe one.”

But the blue zones got little attention until 2005, when journalist Dan Buettner became fascinated by them after reading that 80 per cent of lifespan is lifestyle-determined. He partnered with National Geographic, leading expeditions to the two areas already known to scientists, as well as Okinawa in Japan and Sardinia, and called them “blue zones” after Poulain’s inked map. He continued to work closely with researchers to discover and study two more: Nicoya in Costa Rica, and Ikaria in Greece. (Extreme longevity has also been found in Loma Linda, Calif., but this is a religious community rather than a geographical area, Poulain says.)

Later, Buettner went on to write the bestselling book The Blue Zones: Lessons for Living Longer From the People Who’ve Lived the Longest, summarizing what he learned in his “Power 9” tenets: move naturally, find ways to de-stress (such as napping or praying), drink a moderate amount of wine daily, eat a mostly plant-based diet, lower caloric intake, find a strong sense of purpose, put family first, have strong friendships, and have faith.

The elderly in the blue zones don’t just live longer, they also reach old age in remarkable mental and physical health. Yet Buettner realized that longevity is not something these people pursue: When he asked elderly Ikarians what their secret was, they raised their shoulders: “We just forget to die.” Traditionally poor, Ikarians worked the land well into old age, ate what it produced, and walked everywhere. They had simple pleasures: midday naps and daily socializing. The lifestyle that kept Ikarians healthy into old age was shaped by their living conditions—something that holds true for all four blue zones. It was their environment which fostered longevity.

But Blue Zone inhabitants no longer live in isolation from the rest of the world. In Ikaria, for example, meat was once eaten once a month, but “the newer generation is not eating an ‘impoverished’ plant-based diet” anymore, says Diane Kochilas, a chef and author of Ikarian descent. “Meat is prevalent, and fast food and souvlaki, potato chips and junk food are common.” Christina Chrysochoou, a cardiologist and head researcher of the original 2009 Ikaria study, also found that younger generations don’t live like their grandparents did: their diet is unhealthy, she says, and they lack physical exercise. Although the data on this age group remains unpublished (the focus was on over-80s), researchers found that middle-aged Ikarians (40- to 65-year-olds) had higher levels of obesity, blood fat, and stress than the elderly.

Okinawa is the most visible case of the blue zones’ decline, according to Poulain. Its inhabitants ate mostly nutritious sweet potatoes until 1947, when a new U.S. military base brought with it the adoption of American food. As a result, “the mortality rate for every generation after 1945 is much higher,” Poulain says. In 10 to 15 years, when the older generation dies off, “we won’t speak of extraordinary longevity in Okinawa any more.”

Some of the blue zones are more resistant to change. In Nicoya, studies conducted from 2005 to 2009 indicate that 50- and 60-year-olds are still “comparable [to the elderly] in terms of cardiometabolic risk factors and obesity rates,” says David Rehkopf, assistant professor of medicine at Stanford University. But “the body is a history of everything you’ve been exposed to,” he explains. The extreme longevity of elderly Nicoyans is the expression of something that could have “happened years ago,” probably “early on in their lives.” For young people, Costa Rica is a different place today: “There are KFCs and McDonald’s everywhere,” says Eric Carter, a geography and global health scholar at Macalester College and a Latin America specialist. “They are going through a nutritional transition,” he says, and now have more sedentary lifestyles and higher obesity rates. The people who are 90 or 100 today “come from a different lifestyle,” he says.

The same is true in Sardinia. The harsh, austere environment in which the elderly grew up favoured longevity because it forced people to stay active, Poulain explains. Younger Sardinians simply ride their mopeds.

Poulain also says that when the current generation of centenarians was born, natural selection was a major factor: In Sardinia, up to 20 per cent of children died before the age of one, and only the healthiest individuals survived this brutal cull. Poulain now thinks the extreme longevity of the blue zones may have been a “temporary” generational phenomenon, a combination of an old-fashioned, healthy lifestyle in early life, and later access to modern health care. “There are indicators that say that in 20 or 30 years, there will no longer be exceptional longevity in the blue zones,” he says.

While the original blue zones are under threat, new “artificial” ones may be emerging. After crystallizing the “Power 9” lessons, Dan Buettner realized that it wasn’t enough to adopt them individually: change had to start from within the community environment. So in 2009, he launched the Blue Zones Project, which consults with communities to introduce changes that will “make that healthy choice easier,” says his brother Nick, who directs the program. “Nobody in Ikaria wakes up at 50 and says, ‘I’m going to start exercising so I can make it to a hundred.’ ” Being physically active is part of the way they live.

Communities apply to be included in the project: 31 of 1,000 applicants have been greenlit so far. Buettner says a plan of action is designed in collaboration with the city council and major businesses, then implemented by local teams. Everyone is asked to take a pledge: from individuals repeating the Okinawan mantra to “eat until you are 80 per cent full,” to grocery stores replacing candy with healthy snacks at the checkout and local councils passing anti-smoking policies. Once the community completes a series of requirements, it becomes a certified blue zone—so far, 19 communities have been certified.

The project seems to be bringing measurable improvements—three cities in California area saw childhood obesity fall from 20 to seven per cent over five years, for example, after introducing morning exercise at schools. In Albert Lea, Minn., health care costs of city workers dropped by 49 per cent in just nine months in 2009. Still, the project has critics. Carter says that the program introduces “a free market logic into health policy.” He is also skeptical about the principle of “nudging” people toward certain behaviours, which some have characterized as “Orwellian” social conditioning. But Nick Buettner says the goal is to “create more choices,” not take them away.

Poulain supports such initiatives. “The idea,” he says, “is not to go live in the Sardinian mountains, but to ask: What can we change in our own community to improve health, and therefore longevity?”

Research from the original blue zones teaches us that our immediate surroundings affect our chances of living longer, better—and that includes the people who share our lives. Rehkopf has found evidence that Nicoyans with strong social ties have longer-than-average telomeres (associated with immune system strength). This biological advantage wasn’t present in socially isolated individuals. Paul Hitchcott, a Southampton Solent University psychology researcher working with Nilla Penna and Chiara Fastame of the University of Cagliari, who have been studying Sardinians for years, says they found that elderly Sardinians score very low for depressive symptoms. He describes “how connected and involved [these] communities are. [People chat] in the bakery, over coffee in the morning or over beer or wine in the evening,” and says this “meaningful social contact” is strongly connected to well-being.

The lessons gained in the original blue zones call for a deeper change in culture. In a highly individualistic society, Carter says, the Blue Zones Project tries to promote, “in a pragmatic way,” a more collective way of living well. While we don’t yet know whether the inhabitants of these artificial blue ones will live into their hundreds, one thing is clear, Rehkopf says: “It is absolutely within our power to change.”

The only catch? It takes a village.