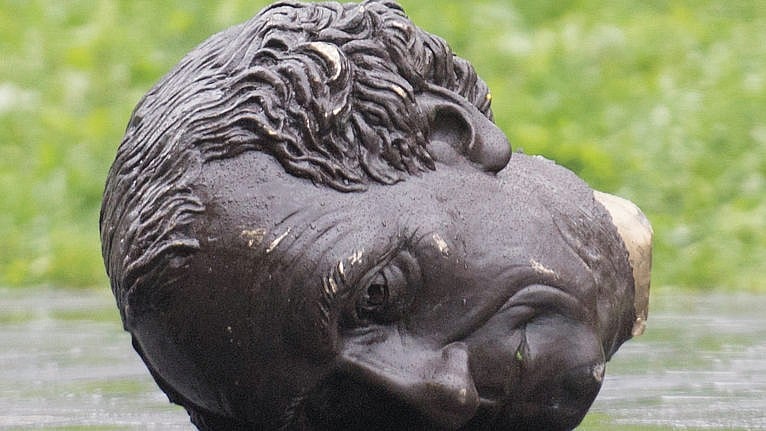 The head of a statue of Sir John A. MacDonald in Montreal, in August 2020 (Graham Hughes/CP)

Mi’kmaq historian Daniel Paul believes that Sir John A. Macdonald’s days in the sun are numbered.

Paul, 81, is the author of We Were Not the Savages, a landmark 1993 book that for the first time told the history of Atlantic Canada from the Mi’kmaq perspective.

In the 1980s, Paul brought to light scalp proclamations issued by Nova Scotia governor Edward Cornwallis in the 1750s, offering a bounty for Indigenous heads. Thanks largely to Paul’s work, in 2018, Halifax took down Cornwallis’s statue and renamed a street and a park. This year, the Canadian Coast Guard took his name off a ship. Cornwallis has been cancelled.

In October, the principal of Sir John A. Macdonald High School in Upper Tantallon, a suburb of Halifax, dropped the name because Macdonald’s record as the architect of the residential school system and the Indian Act alienated Indigenous students. Earlier in October, Queen’s University took his name off its law school for the same reasons.

In August, protesters beheaded a statue of Sir John A. in Montreal. In November, protesters splashed his statue in Hamilton with red paint.

Sir John A. is on a losing streak, and Paul thinks it won’t be long before all the statues of Canada’s first prime ministers are in storage.

“I think eventually he will be relegated to history books, the same as Cornwallis,” he says. “Being put on a pedestal and shown as a hero will, I think, fade into the background. He will be recognized in the history books as one of the founding fathers of Canada but not as a hero.”

Macdonald’s admirers are pushing back, but not with much force. Conservative Leader Erin O’Toole, like Andrew Scheer before him, has repeatedly objected to Sir John A’s cancellation. “Canada wouldn’t exist without Sir John A. Macdonald,” he said after the Montreal statue was pulled down. “Canada is a great county, and one we should be proud of. We will not build a better future by defacing our past.”

But O’Toole didn’t take to social media to comment on the Halifax school changing its name, and historians and commentators don’t seem inclined to speak up for Macdonald’s place in the public square in the face of determined arguments from Indigenous protesters and their allies.

“John A. was a full believer in white supremacy,” says Paul. “In Canada at the time, the white population, the majority was behind him. So his philosophy of keeping Canada an Aryan nation was shared by a great many Canadians.”

Macdonald’s admirers say that it is wrong to judge him by the standards of our time, and question whether he was responsible for the residential schools that caused so much misery for Indigenous people, pointing out that Liberal governments, including the government of Wilfrid Laurier, expanded the system.

But there is no getting around Macdonald’s responsibility, says John Milloy, a history professor at Trent University who wrote A National Crime: The Canadian Government and the Residential School System, 1879 to 1986. Milloy’s research has convinced him that Macdonald and his officials built residential schools to exert political control over Indigenous people.

“Children taken into residential schools would be hostage to their parents’ good behaviour,” he says.

Modelled after similar schools in the United States, but run by churches, residential schools were responsible for terrible harms to First Nations children, many of whom perished of disease and malnutrition. In 2008, then-prime minister Stephen Harper apologized in the House of Commons for “emotional, physical and sexual abuse and neglect of helpless children, and their separation from powerless families and communities.”

Milloy, who has spent his career documenting the harm done by the schools, says the subjugation of Indigenous people—the schools, widespread starvation, the apartheid-style pass system—is inseparable from what we want to celebrate about Macdonald.

“Residential schools were part and parcel of Macdonald’s national policy: i.e., the expansion of Canada West, and everything was a genuflection to that idea,” he says. “What has made Macdonald the father of Confederation and the father of the nation? That’s his value, right? What do you do? You’re going to put the guy down for the fact that he managed to put the country together on a sea-to-sea basis and hold the Yankees off at the same time?”

Milloy says the Macdonald statues have a public education benefit, because they serve as a focal point for demonstrations about his legacy. And taking them down won’t improve things for Indigenous people. “Reconciliation in this country has gone nowhere,” he says. “Taking down the statues is hardly reconciliation.”

Nonetheless, it is reasonable for Indigenous people to want Macdonald removed from his place of honour, says Cindy Blackstock. Blackstock, a member of Gitksan First Nation, has been fighting the federal government in court since 2007, so far unsuccessfully, trying to force Ottawa to provide the same levels of funding for Indigenous child services as for other children.

Blackstock wants Canadians to mark the cultural genocide perpetrated against Indigenous people, and she doesn’t see it happening, but she has done what she can to create “learning spaces.” In 2015, she convinced Beechwood Cemetery in Ottawa to put updated plaques next to the graves of Duncan Campbell Scott, the senior ofﬁcial who relentlessly pushed the policy of “removing the Indian from the child,” and Dr. Peter Bryce, a health official who was later forced out of government after protesting the mistreatment of Indigenous children when Laurier was prime minister.

“This whole thing is not just what you take down,” she says. “It’s what you put up. You actually create an opportunity of learning.”

A spokesperson for Heritage Minister Steven Guilbeault said in an email that the government is working on changes to its website and on plans for a monument in Ottawa. Guilbeault’s office pointed out that in 2017 the government stripped the name of Hector-Louis Langevin, a key architect of the residential school system, from the Prime Minister’s Office.

Blackstock notes that the government has not changed the name of the Sir John A. Macdonald Building, where news conferences are often held, although it only got its new name in 2012, under the government of Stephen Harper.

Jody Wilson-Raybould, a member of the We Wai Kai Nation, was minister of justice when Trudeau made that change, before a high-profile falling out with him over the SNC-Lavalin affair. She now sits as an independent. Wilson-Raybould says when Trudeau removed Langevin’s name, he asked her how she felt about the Macdonald building.

“The Prime Minister and other people were like, how do you feel about this building? And I’d be like, ‘Don’t care.’ When I was [minister of justice], I would . . . walk by all the pictures of previous ministers, including the first one, which was John A. Macdonald, and I would feel empowered by it, because I knew that so much had changed since then, and I look so different than what he looked like. We have a long way to go but we’ve come a long way.”

Like Blackstock, Wilson-Raybould thinks statues should be removed from places where people have to go for business reasons, but she has never been able to muster enthusiasm for the fight. “We have to have a plan to go beyond that kind of advocacy or protest. I think it’s a distraction from what actually needs to be done to move the dial beyond those antiquated views about Indigenous people. I think we actually have to do practical things to change the reality.”

This article appears in print in the January 2021 issue of Maclean’s magazine with the headline, “Burying Sir John A. Macdonald.” Subscribe to the monthly print magazine here.