Squawk-fests over granny units have become a distasteful ritual at city hall. For a wealthy, modern metropolis, it's unbecoming. 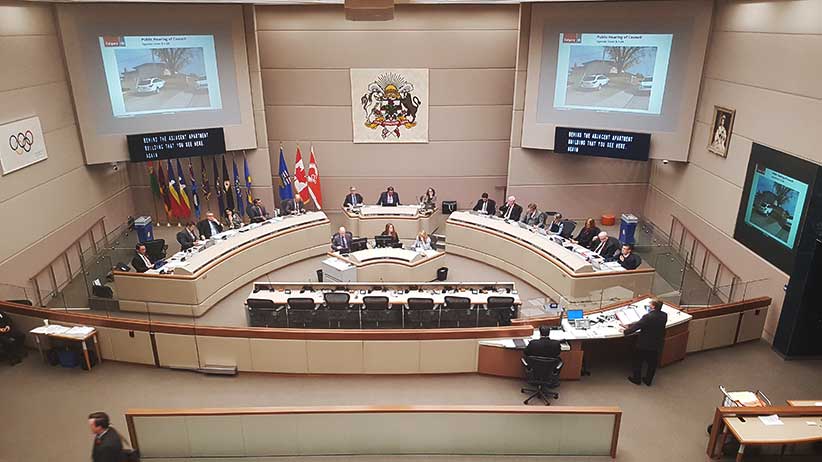 The bungalow-owners and split-level-dwellers of Parkland were trying to pick up the pieces Monday, after what Calgary city council had just voted to do to their community, along a provincial park 20 kilometres south of downtown. “Now our neighbourhood is ripe to be taken over by developers,” Cindy Ross said, huddled with worried neighbours outside council chambers. “Crime’s going to go up,” another chimed in. More than 100 residents had written in to oppose this zoning change, pleading to council that one landowner shouldn’t have the power to so transform their suburban enclave. Council voted 8-7 against the assembled Parklanders’ wishes. Outside, they shook their heads in disbelief at Mayor Naheed Nenshi and his colleagues.

What atrocity did these councillors approve? They voted to enable one elderly homeowner of 40 years to develop an extra suite in her basement, or above her garage, on Parkridge Crescent Southeast.

Nenshi’s council spent most of the Monday’s meeting doing this—carefully vetting the planning merits of 20 individual homeowners’ proposals to secondary suites. From around 10:30 a.m. to around 4:30 p.m. (plus  one proposal after supper break) they heard from residents who wanted mortgage-helpers, or basement dwellings for home-care workers, or to legally rent out a unit of private, affordable housing in a city perennially starved for it. (One woman who recently lost both her legs to lupus said she wanted her parents to live downstairs as mobility assistants.) Then their neighbours in Whitehorn and Edgemont and Southwood and elsewhere chimed in, fretting about traffic, parking availability or overall character and tranquility should a single extra rental unit or granny suite get the green light—setting them on a slippery slope of more finished basements becoming rental units in their suburban midst.

RELATED: Naheed Nenshi put out a fire. Now he must deal with the Flames

For the four councillors elected last month to join Nenshi’s curved table, this first meeting may have felt like a bizarre hazing ritual. But it’s long been a monthly occurrence at Calgary city council, this public airing of homeowners’ development ambitions, fears and personal tales of need or neighbourhood tension.

No other major city in Canada does this. In Toronto, Vancouver, Edmonton, Saskatoon and nearly any other community you can think of, councils allow any homeowner to establish a secondary suite in any standalone houses. Calgary appears to be unique in this ongoing public shame of a political process, where, if enough residents complain on the first Monday of the month, councillors can deny a homeowner’s wishes because that might mean too many parked cars and humans on a cul-de-sac or corner lot. Because this rule lingers, and residents know about it, they complain, prompting development authorities to rip the kitchens out of hundreds of basements, thereby shuttering suites every year—having all to do with zoning regulations and nothing to do with safety. Thousands more exist as “illegal suites” at risk of being shut down.

Council has heard more than 150 of these applications this year, passing most. Last year, the absurd ritual took up 20 per cent of all their meeting time. In saner jurisdictions, developing a suite requires a permit to city planners, not rezoning that involves politicians.

Despite repeated attempts by Nenshi at reform—it was the first “better idea” he promised in his first mayoral campaign in 2010—Calgary’s 15-member council has steadfastly refused to budge. Pretty much every citywide organization and group that gives two figs about city hall—the student alliances and anti-poverty agencies; the home builders’ association and Chamber of Commerce—has advocated for an easier way to permit and regulate suites. Yet Nenshi and fellow reformers have failed to dislodge the status quo. And though there’s renewed hope, with a new group of politicians alarmed by the tediousness and pettiness of basement-hearing Mondays, they must tiptoe around or bulldoze through a mentality that permeates much of residential Calgary.

It’s this: a man’s zone is his castle. A neighbourhood of single-family homes established 40 years ago or longer must never be altered. Allowing one or more basement rentals shatters the pleasant stasis. While much of Calgary’s inner city and newest suburbs have no zoning barriers for suites, many of its postwar neighbourhoods were established with land-use zones that established an invisible fence around districts, declaring them free of units popular among low-income renters and their landlords. Other cities have prohibited these invisibly gated communities that bar certain types of people that residents fear would affect the area’s character. The neighbourhood leagues and homeowners opposed in Calgary have cowed the city’s politicians into keeping their communities’ basements renter-free.

“Does one homeowner have a right to influence the community on such a big level? Parkland is single-family. It’s been single-family since the 1970s,” said Laura Di Lello, who has lived there for four decades, except her university years. She insisted no zoning changes be allowed until every original owner has moved out.

Barbara Ontko of Edgemont, a northwest suburb, said: “We don’t have the services and facilities enjoyed by some inner-city neighbourhoods—reliable frequent transit, libraries, pools and arenas. But we do have a community that we would like kept the same.”

Ontko and neighbours, mostly retirees, expressed unhappiness about all the traffic caused by daily drop-offs at the children’s day home owned by Muhammad Awan, who wanted a basement unit to rent out or to accommodate his parents when they visit. Council rejected his application in an 8-7 vote after lengthy debate. “All these seniors, they don’t accept the new person,”Awan said. (Many of the suite applicants on Monday were from visible minorities, it’s worth noting, while many of the status-quo guardians were white.)

To the mayor and many city councillors, a basement or backyard accessory dwelling isn’t community destruction or overhaul. To some Calgarians, rental basements and rear carriage houses are okay only in neighbourhoods already zoned for it: the classic not-in-my-backyard mentality, twisted into the decidedly anti-libertarian, not-in-their-basement.

“People have to be ready for change. Everything is change,” Jyoti Gondek, one of the new councillors who doesn’t want to sit through many more of these ugly spectacles. “And when people say we want it to be a family-based community—families change over time.”

As Nenshi’s agony on this file stretches into its seventh year, he hopes councillors will finally find a fix. “What we’re seeing, especially after today, is council being reminded of how awful this is, what a waste of time it is, how expensive it is, how ludicrous it is for us to be pitting neighbour against neighbour in this way in such a public forum,” said Nenshi.

It shouldn’t be rocket science, he says, when so many other Canadian cities have done it. Calgary likes to think of itself as exceptional. Being the last bulwark of renter-free basements is nothing to be proud of, and hopefully council can shake its ugly monthly habit.