Canada will soon legalize edibles—and the market is enormous

Edible marijuana products are coming in October 2019, along with a flood of new regulations and legal questions 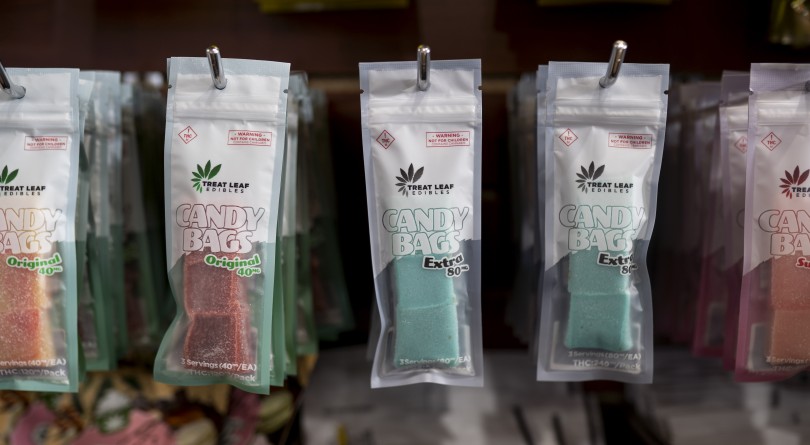 Packaging of edibles is likely to be closely regulated to avoid appealing to underage consumers. (Photograph by Nick Iwanyshyn)

The year-long wait to legalize edibles is much like edibles themselves: it takes a bit more time to kick in, the effects last a little longer and the experience is not quite the same as smoking flower. After all, when smokable buds and oils arrived for legal sale on Oct. 17, the pot-infused foods—like cookies, brownies and gummis—that took up a large chunk of the black market remained illegal. But they’re coming. And when this next phase of cannabis legalization takes effect in October 2019, it will usher in a plethora of new rules and regulations, while signalling yet another psychedelic shift in Canadian society.

“It’s going to be very complex,” says Jo Vos, managing director of Leafly Canada, a cannabis information company that keeps a close eye on Canadian legislation, acknowledging that “it was a smart approach” on the federal government’s part to hold back edibles.

Legalizing a new product for Canadians to consume, Vos notes, means that Canada will likely have to make amendments to several other pieces of legislation, including the Food and Drugs Act, the Controlled Drugs and Substances Act and the Cannabis Act itself. However, lifting the ban on edibles in 2019 doesn’t just mean having more marijuana-filled pastries. Vos expects the law’s passage to open up a vast new market ﬁlled with everything from cannabis creams and gels to transdermal patches and ingestible capsules.

One of the biggest questions heading into next year will inevitably be the amount of THC—pot’s psychoactive ingredient—allowed in each product. When legal marijuana arrived in Colorado in 2014, there were few regulations; that year, hospitals responded to an alarming number of high, underage children. These days, packaged edibles within the state must come in servings of 10 milligrams (an amount that’s generally considered a low-level dose) or less. In a statement to Maclean’s, Health Canada wouldn’t touch on the government’s dosing plans, saying that edibles would have “stringent regulatory standards, and be produced under sanitary conditions in facilities that meet specific physical security requirements.” But Tammy Jarbeau, a Health Canada spokesperson, noted that there are plans to look at the “specific health and safety risks posed by these novel products,” like their appeal to children, issues of overconsumption and “contaminated or food-borne illnesses.”

Yannick Craigwell, owner and operator of Treats and Treats in Vancouver, a company that sells baked goods infused with cannabis online (something that runs afoul of the law but is tolerated in Vancouver), is watching the second stage of legalization closely. Many of his treats carry anywhere from 90 to 175 milligrams of THC (one could easily find a cookie in Vancouver with close to 300 milligrams, he says), and he hopes to open a bakery the day the law gets passed. Craigwell’s biggest concern is packaging, fearing that the rules could affect a company’s ability to personalize its branding. “This is what gives us our chance to stand out,” he says. “If small businesses are told to put things in carbon-copy boxes that don’t say anything about the vendor, then it lends to the bigger corporations.” He points to the example set by Colorado, where producers are prevented from making edibles that resemble animals, fruits or people in an effort to make them less enticing to children.

RELATED: What’s the difference between smoking and edibles?

Craigwell has been baking sweets since he was a kid—growing up, his mother refused to buy him cookies, so he was forced to concoct recipes himself. He began experimenting with cannabis a year after he launched his business in 2014. For all the debate about keeping edibles away from children, Craigwell believes those concerns shouldn’t dictate policy. “It’s up to the parent to be a good parent,” he says, and notes the dilemma is akin to kids eating Tide Pods on the internet: “That doesn’t mean we can’t do laundry.”

Vos concurs, adding that avoiding the cannabis industry and “working in silence” would be the biggest mistake the government could make going into 2019. As it stands now, only manufacturers with a licence from Health Canada would be allowed to make and bake edibles. To legally sell these products, retailers will need permission from their province.

Regardless of what happens, there is little doubt that the market for edibles will be enormous. A 2018 survey from Deloitte suggested that six out of 10 Canadian customers would choose pot edibles over smokables.

Craigwell has noticed a spike in sales since the first legalization day, and Vos has seen the number of edibles-related searches among Canadians soar since October. The country is curious, but people also “want to consume discreetly, in a way that is maybe elegant and a bit more refined than rolling and smoking a joint,” she says, and notes that women may be more drawn to edibles. What should first-timers expect when they take home a pot-laced brownie next October? Start with a nibble and proceed slowly, Vos advises. Then, when you’re ready, “continue your journey from there.”