25 per cent of Canadian seniors live alone, but there lies a little-documented population within that demographic that live in acute isolation 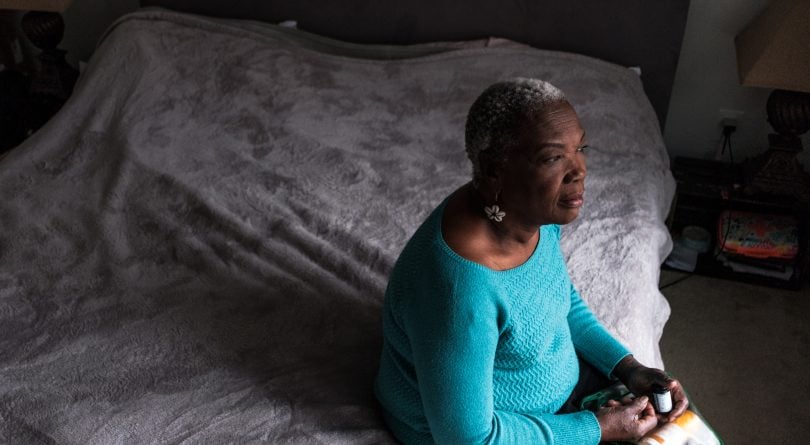 Elderly Haitian American woman sitting on a bed looking out the window while getting her glucose reader to check her blood sugar and insulin pen ready. (Eddie Pearson/Stocksy)

To have nobody means to have no children, spouse or friend still alive. It is to have no church group to belong to, no neighbour to eat a sandwich with or sibling to come over. If someone has a mailman or even a hydro meter reader who says hello, that greeting is a connection, but when somebody has nobody, the option is 911.

“We have individuals who will go weeks and weeks and weeks without having contact with someone from the external,” says Ryan Sneath, a paramedic in Winnipeg. “They end up calling 911 because 911 ends up addressing their needs. They get interaction immediately. They get transported to an emergency department, where people care for them and are engaged with them, and I think they often crave that interaction or crave that engagement.”

Sneath is one of the few medical practitioners who are beginning to identify Canada’s loneliest people. While 25 per cent of Canadian seniors live alone, there lies a little-documented population within this demographic that live in acute isolation. Statistics Canada says it doesn’t have publishable data on a group now being labelled “elder orphans”—people who are 65 and older with no living spouse or children. However, these people are sometimes called “elder orphans.” The term “evolved in American academia in the early 2000s and is most recently associated with a 2016 journal article by Maria Carney, a geriatric doctor at Hofstra University in New York who was the lead author of “Elder orphans hiding in plain sight: a growing vulnerable population.” The paper deﬁnes “elder orphans” as aged, childless, single people who are physically and/or socially isolated, and it found that 22 per cent of American seniors are at risk of becoming one.

READ MORE: The excruciating loneliness of being a new mother

These seniors often live in cities but are not mobile enough to leave home. In some cases, they have no internet and get food dropped off by Meals on Wheels programs with no interaction from delivery staff. They get caught in cyclical loneliness as they socialize less, become less mobile and more isolated. Paramedics in Winnipeg have begun to flag frequent callers who summon an ambulance for “social visits,” and emergency rooms in British Columbia are pinpointing seniors who arrive with no conventional injury. “Sometimes it’s complaints of back pain or leg pain or something chronic that they use as a complaint,” explains Sneath. The paramedics take the patient to the hospital by default. “A lot of it is, they’ll come in and ask for a sandwich,” Sneath says. “Their complaint disappears as they get that interaction.”

In 2013, Sneath started a team of paramedics to respond to frequent callers by assessing their social and medical needs instead of taking them to hospital. When the team followed up with one man who’d been discharged from hospital, Sneath recalls, “He didn’t have any heat in his house, to the point where his toilet water was frozen. He could no longer use his plumbing, and he was using a bucket to go to the washroom in.”

Canadians don’t often use the term elder orphan. “This idea of an elder orphan is very true for many adults who don’t have families,” says Kahir Lalji, the B.C. director of healthy aging for the United Way. “Absolutely there are elders who are orphaned, but a human element is really lost in that.”

“If they don’t have adult children then they’ve really lost the one connection in the world,” says Grace Park, program medical director of home health at Fraser Health in British Columbia. Park closely monitors patients when they lose a spouse, as they may become anxious and depressed and decline on the “frailty index.” “They may not even open their doors and walk down to get the mail, and if they did, that would be a big event,” Park explains. “Who knows if they’re getting regular meals? Who knows if they’re getting exercise, if they’re mobile?” she says. “They would decline or become helpless and be overwhelmed and call emergency services.”

RELATED: PTSD and the loneliness of coming home

One patient, who still has children and no serious medical concerns, asked Park about medically assisted dying—“not actively suicidal but feels she doesn’t have pleasure in her life anymore,” Park says. Indeed, even seniors with family aren’t immune to urgent loneliness.

“You wish people would just say ‘hi,’ ” says Elizabeth Sewell, a 65-year-old woman in Prince George, B.C. Sewell married and was widowed three times. She has three adult children, but since her third husband, Dawson Kindred, died, she becomes lonely even while walking around the mall. One day, she explains, “I was walking behind this feller, and he looked exactly like Dawson from the back, and I just said, ‘Dawson,’ and I was hoping he would turn around and it would be Dawson. I said, ‘Oh no, he’s gone.’ ”

Sewell liked to play Solitaire, but her arthritis made it too painful to hold the cards. Sometimes she sits with a woman in the laundry room of her apartment building, or watches Dr. Phil by herself, and through the United Way’s Better at Home program, a cleaner comes to the apartment once a month, and a volunteer “friendly visitor” spends about an hour with her every other week.

“It’s making them feel alive and wanted,” says Ruth Noble, a volunteer at another program in B.C. called the Seniors Come Share Society. Noble goes with one senior to a Bible study group and helped an 83-year-old man ﬁll out his passport application because he wanted the sense of freedom. Aside from volunteers, Noble encourages children to visit their elderly parents. “They’ll say, ‘I’m ﬁne,’ and you know, they really aren’t ﬁne.”

In Winnipeg, Sneath has set up an at-risk referral program whereby people can notify paramedics if a senior needs social connection. “That could be gas meter readers, water meter readers, the people who have the opportunity to ﬁnd these people in the community,” Sneath says. “But once you ﬁnd them, now what?” Sneath’s team connects the seniors with social workers, home care workers and personal support workers. In the case where the man’s water was frozen, they got his heat turned back on.