The northern city is struggling with stabbings, assaults, gun crimes and other offences. It can't solve the problem on its own. 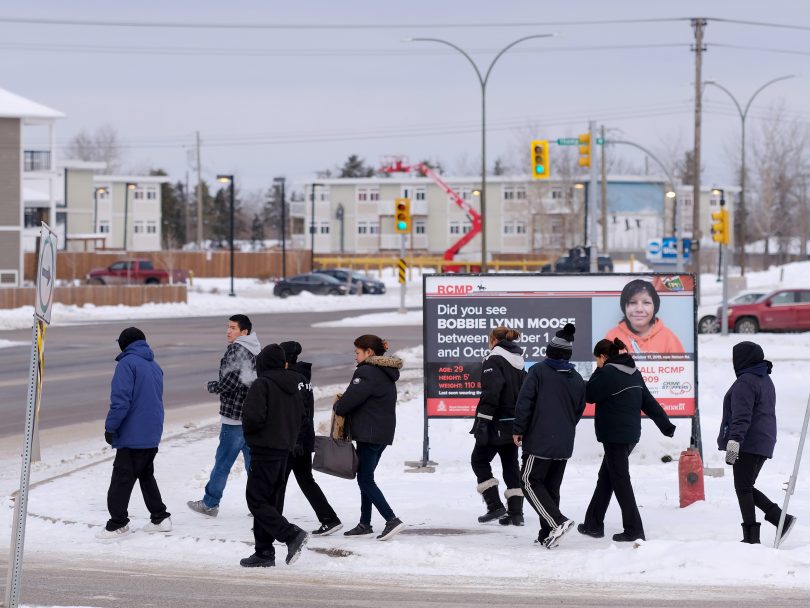 A billboard asking for information in the murder of Bobbie Lynn Moose sits near the city's liquor store. The 29-year-old mother of two was found murdered on the edge of the city centre this October. (Photo by Shannon VanRaes)

It’s the “machete kids” that worry Donnel Jonsson most. The property manager for Ashberry Place, a low-income apartment complex in Thompson, Man., has dealt with assaults, fires and even murder over the years. However, recent youth crime has him feeling unsafe, particularly along the city’s Spirit Way trail.

“Kids are going around and assaulting individuals walking the path, no reason why, they just come up to them and basically stab them or cut them across the face,” he says, pointing to a wooded section of trail below a 10-storey-high wolf mural.

This May, the city’s RCMP detachment indeed found itself investigating a stabbing spree that left five injured. In March, a machete-wielding home invader hacked a dog to death and in June, Thompson saw two stabbings and a machete attack in three days. August then saw a 30-year-old woman stabbed in the face and chest outside a downtown business. Some of those arrested were as young as 12 and many speculate the attacks were gang initiations.

INTERACTIVE: See the full ranking of Canada’s most dangerous places

For three years running, Thompson has held the unenviable position of Canada’s most violent city in Maclean’s ranking of the country’s most dangerous places. The finding is based on data from Statistics Canada’s crime severity index, which examines police data from all Canadian cities with a population over 10,000. Thompson didn’t have the worst crime problem, in general—North Battleford, Sask. had the country’s highest overall index number. But the prevalence of violent offences like sex assaults and firearms offences in the Manitoba city, along with a rise in impaired driving and some drug crimes, pushed Thompson to No. 2 on that list, as well.

Located nearly 800 kilometres north of Winnipeg, the city of 13,678 faces the same, complex issues as much larger urban centres—transient populations, inconsistent funding, addictions and homelessness—plus the deep legacy of colonization.

Mayor Colleen Smook, a veteran of the northern construction industry who still leaves her doors unlocked, is angered by the ranking. Yes, crime is a concern and the city is working to address it, she says, but she adds “those numbers don’t accurately reflect life in Thompson.” 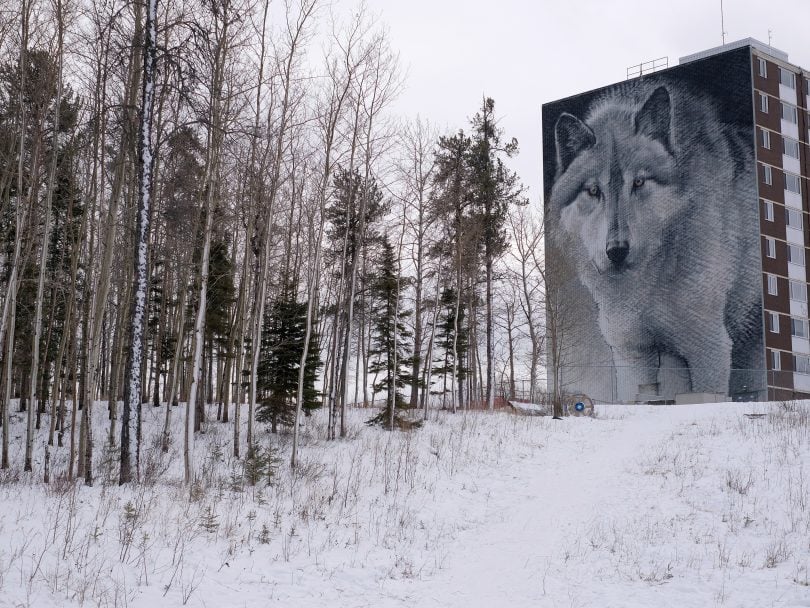 A reproduction of a Robert Bateman wolf painting on the side of the Highland Tower in Thompson, Manitoba. (Photograph by Shannon VanRaes)

Staff Sergeant Christopher Hastie confirms members are more likely to investigate assaults involving improvised weapons—like paper cups, plastic bottles and in a recent case, an electronic tablet—than deadly weapons like firearms or knives. And he believes a greater numb­­er of common assaults are reported in Thompson than other cities, which skews crime stats upward.

“Thompson has a bad reputation, but there are some really good people here,” says Sgt. Hastie. “But it’s like anything in life, we kind of focus on the negatives more than the positives.”

Founded in 1956, after the discovery of significant nickel deposits, Thompson’s streets follow a pattern more reminiscent of a subdivision than a Roman grid. Concentric roads, bays and crescents spread out from a cluster of low-rise malls, downtown hotels and fast-food restaurants that makeup the city’s core. At the centre, wedged between drinking establishments, the public library and a gas station, is the Thompson RCMP detachment.

Nearby, groups of people—some homeless, some transient—gather early each morning to consume bootleg alcohol, then head towards the ci­­ty’s one, recently relocated, Liquor Mart before 10 a.m.—many for London Westminster Canadian Apera, a cheap sherry with 20 per cent alcohol content and a product of choice among those suffering alcohol addiction.

Evelyn Wood, 72, moved to Thompson eight years ago to be closer to her daughter, but tries to get her shopping done before the liquor store opens. “I think it’s worse now than when I first moved here,” she says while loading groceries into her car outside the Thompson Walmart. As if on cue, an intoxicated man begins screaming and thrashing at shopping carts a few metres away.

At the Thompson Homeless Shelter, co-ordinator Abbey Ogunbanwo makes jokes and smiles as he asks participants about their days. He acknowledges that shelter clients “have their moments” when it comes to public intoxication. But he emphasises that addiction and homelessness are making people vulnerable. “Violence in this city is not coming from the homeless people,” Ogunbanwo stresses. “The homeless people are the ones being attacked.”

Brenda Kirkness, a shelter client, knows exactly how vulnerable the homeless are. When asked about having her photo taken, she replies darkly: “Good idea, in case I go missing one of these days.” 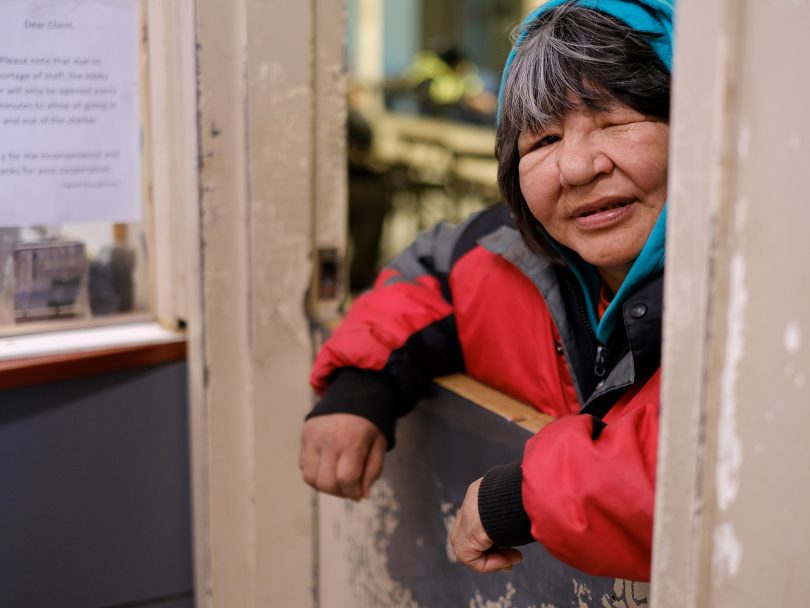 Brenda Kirkness regularly uses the services of the Thompson Homeless Shelter and was the victim of a violent attack earlier this year. (Photograph by Shannon VanRaes)

This summer, Kirkness woke up in hospital after being jumped. Or at least that’s what people told her happened. The last thing she remembers is drinking with friends near the Safeway store. Not long after being released from hospital, she witnessed a man being stabbed near the shelter.

Another shelter client, Bobbie Lynn Moose, was found murdered on the edge of the city centre this October. The 29-year-old mother of two, originally from Nisichawayasihk Cree Nation, was much loved within the community; RCMP have put up a billboard asking for public assistance and have canvassed every home and apartment in the city. But so far, no arrests have been made.

Ogunbanwo says most of the stabbings were linked to what he believes is a growing transient population: “The last five or six months, we’ve had a lot of youths, a lot of teenagers, that came from other communities into Thompson and they are the ones that are actually attacking people, especially the vulnerable people.”

As the “Hub of the North” Thompson serves a regional population of 55,000. The city’s airport is the second busiest in the province and more than 40 remote communities—mostly First Nations and Northern Affairs settlements—rely on Thompson for essential services and commerce.

“Basically, we’re on the front line of the issues we’ve had in the past with First Nations and we’re trying to rectify that with reconciliation,” explains Jeff Fountain, a Thompson city councillor. “But we’re facing the fallout from all of these, some people would call it, colonial legacy issues.”

Manitoba Keewatinowi Okimakanak Inc. is a political advocacy group representing First Nation signatories to Treaties 4, 5, 6 and 10. Grand Chief Garrison Settee lives in Thompson and says the overrepresentation of Indigenous people in the criminal justice system is directly related to colonization and government policies that left a legacy of intergenerational trauma.

PHOTOS: A look at the most dangerous places in Canada

“Youth being so detached from their culture is one of the products of Indian residential schools,” says Settee. “And if they don’t have their own culture, they’ll adopt any culture—be it one of drugs or of violence. We need to introduce a culture that is positive, and their own is probably the thing they need to be reconnected with.”

Disaffected youth—as well as those in search of housing, employment, social services, medical care, education, recreation and good-times—often end up in Thompson after leaving First Nation communities, where services and infrastructure as fundamental as clean drinking water are frequently lacking. Service providers say they then risk becoming part of the city’s so-called transient population—couch surfing, staying with family or squeezing into over-capacity rentals, unable to find permanent housing. Many only plan to be in Thompson a short time, but find themselves stranded when they can’t afford a plane ticket home or when winter roads close for the season.

Staff Sgt. Hastie estimates about 90 per cent of charges laid by the Thompson detachment involve individuals from outlying communities. “It’s a means for them to escape, especially with a lot of the youth living in deplorable, third-world conditions,” says Hastie. “Coming to Thompson is definitely a step up.”

Three years ago, Thompson launched a so-called “hub” policing model, connecting social service providers with law enforcement in an effort to identify at-risk individuals and give them help. Smook says the model is working—even if it’s hard to see concrete statistical results.

“I think our problem is we have more and more people coming into town [who are in need], so that sort of takes away from the finished product,” says Smook.

StreetReach, a Winnipeg-based program aimed at preventing the exploitation of vulnerable youth, has operated sporadically in Thompson over the years. Although overnight youth crime went down as much as 80 per cent while StreetReach was operating in the city, Thompson hasn’t been able to secure funding for a permanent program like that of its own. 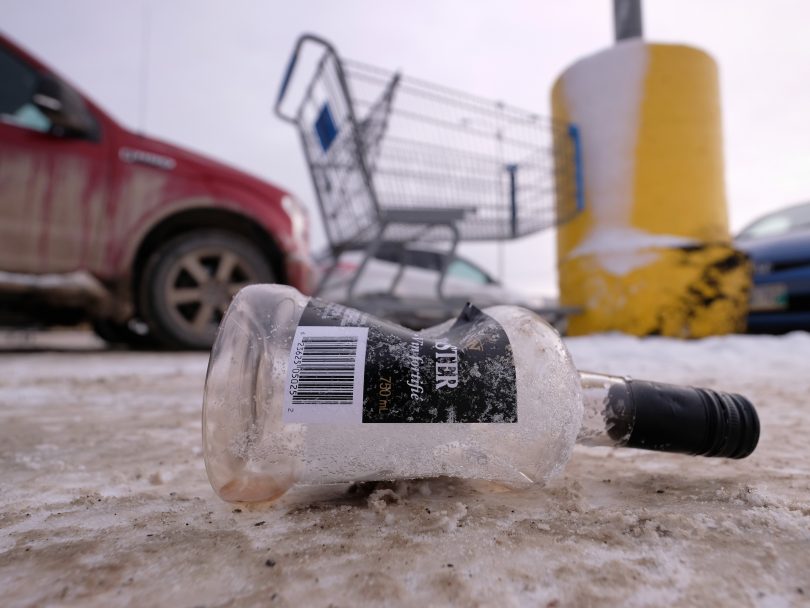 An empty sherry bottle, one with 20 per cent alcohol content and a product of choice among those suffering alcohol addiction, sits in a Thompson, Manitoba parking lot. (Photograph by Shannon VanRaes)

The city and Indigenous organizations have also pushed for establishment of a restorative justice centre in Thompson, but to no avail.

Ultimately, Mayor Smook says, the issue is one of resources needed from provincial and federal governments: more money for housing and social services on reserves; for cultural programs, restorative justice, transitional housing and crime prevention would go a long way to addressing the issues Thompson faces, she says. “It’s starting, but it’s a very slow process and we’re still waiting,” Smook adds. “Often, we get a program going and it seems to be working … and then funding dries up.”

Serena Puranen, a defence lawyer with Legal Aid Manitoba, says Thompson also desperately needs greater mental-health support for youth. “There is so much trauma that many of the people who come here have suffered and there is no adequate trauma care—we don’t have registered child therapists,” says Puranen. “You’re filling a cup that has a massive hole in the bottom of it.”

Grand Chief Settee, who notes cultural programming in Thompson is “scarce,” points to the federal government’s role in addressing social issues, not just in Thompson, but across Northern Communities. “Colonization came from the highest level of government, residential schools came from the highest level of government, and they need to invest in programs that will restore culture and identity and the language of the people,” he says. “Once that happens, they’re going to start to see a lot of people finding their way.”

Back at Thompson City Hall, the mayor states the obvious: “The city can’t do this on its own.”