They were more than father and son, they were best friends, who lived for the outdoors, and each other 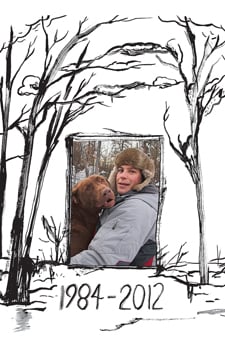 Chad Emil Janke was born on Apr. 12, 1984, in Edmonton. Tim, his father, worked as a licensed mechanic at a dealership in Westlock, a town of 5,000, about 85 km north of Edmonton, where the family lived. Kathy, his mother, cared for Chad and his older sister Joleen.

Chad was a “boy’s boy.” He loved hanging out with his dad, from whom he got a taste for adventure and a love of nature. On weekends, the two would bond over fishing, hunting and testing their survival skills in the woods. The rugged northern Alberta plains was their playground, and sealed what would become a lifelong friendship. Chad’s uncle, Tim Strehlau, often joined them. He recalls trips when Chad was barely three, riding the ATV with his dad. They “got along so well,” says his uncle, “laughing at silly things.” By the time he was 10, says Strehlau, Chad “was thin and lanky.” But “he had his temper,” and was a tough kid. He grew to be a big, handsome man with a body built for hockey.

The family was tight knit. At school, Chad, a popular kid at Westlock’s R.F. Staples secondary, always had time for his cousin Anna and sister Jolene. “He was never afraid of showing he genuinely liked his family,” says Anna, and always had a big wave for her in the halls. Chad and Jolene had two cats, Allison and Donatello, and a dog, Chester, a Chesapeake retriever. Chad was a bit of a charming troublemaker, the life of the party, says Joleen, three years his senior. “He just had so much energy,” she says. He blew off steam by playing hockey—a lot of it, and very well.

After graduating high school, Chad got a job at a tire shop. Following his dad’s footsteps, he earned his mechanic’s licence and started working at local dealerships.

Six years ago, Chad spotted Angel, a clear-eyed brunette in Daisy-Duke wedge shoes, at an Eskimos game. He walked right over to her. “I love your shoes!” he said, and offered her a beer. She couldn’t believe his striking blue eyes. “I thought they were contacts,” she says. Eight weeks later, Chad was packing his bags for a move to Slave Lake, Alta., his new love’s hometown. “It was fast,” says Katie Bickell, Angel’s best friend. But “they were head-over-heels in love.” After a year, they moved to Edmonton, where Angel found a job as a welder. In 2008, they bought a home in Sherwood Park.

On Aug. 13, 2009, Chad took Angel to the Muttart Conservatory in Edmonton for her 24th birthday. Chad, usually relaxed and chatty, was nervous, and a stranger seemed to be following them, says Angel. When they reached the tropical plants exhibit, Chad went down on one knee and asked her to marry him. The stranger was a photographer he had hired to document the scene: he shaking, she, wiping away tears of joy. They married in July 2010 in Westlock. Angel couldn’t have been happier. She had found someone who “taught her to live her life to the fullest.”

Though Chad no longer lived near his parents, he visited Westlock often. He looked up to his father, and wanted nothing more than to become a dad himself. In November, Chad learned Angel, then four months pregnant, was having a baby boy; she was due in April. Chad and his father “couldn’t wait to add one more guy to the team,” Bickell says. Chad and Angel decided to call him Vinly.

The last weekend of January, Chad and his father packed their bags and headed to a trapper’s cabin only accessible by ATV. They would spend two days quadding and fishing—yet another of their many weekends together in the woods. On Friday night, the two went to sleep, the wood stove still burning. Overnight, the cabin caught fire. Chad and Tim—his father and best friend—died together, on Jan. 27. It would take five days for relatives to identify their bodies. Chad was 27.