Checking out the Olympic Goodies 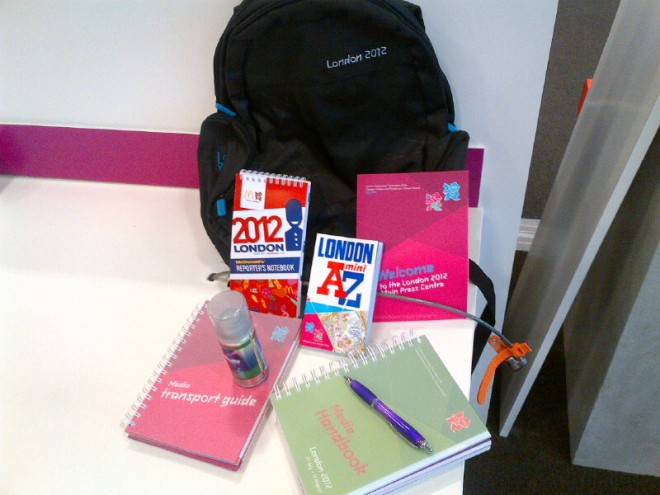 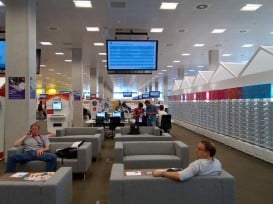 Well, here it is: the London media goodie bag. It’s the first thing we journos get at the Main Press Centre. (I still have the bag from my first Olympics, a red carry-all from Calgary in 1988. Calgary wasn’t a great Games from a Canadian medal point of view, but the spirit of the city, and the province, and the army of volunteers, was an introduction to one of the best things about having the Olympic circus come to down.)
Anyway, inside London’s very nice computer backpack is a collection of the essentials. First off, and you have to admire the British optimism, is a Gillette spray bomb of skin conditioning sunscreen.
Turns out we actually need it. After long months of rain, the temperatures have been gloriously warm, and the sky has been a cloudless blue. So unexpected is the 30-degree weather after months of monsoon, that last night I saw dollies laden with electric fans being wheeled into the Athletes’ Village. Apparently there have been sweaty sleepless nights in the village.

I’d expected to see an umbrella in the goodie bag, but again, there’s that British optimism. I hear they even have fake clouds and artificial rain planned for the opening ceremony Friday, if the heavens don’t provide the real deal.

What else? Let’s see, there’s the Transport Guide, a spiral bound monstrosity that shows the media bus routes and timing to get to the various events. I’ll be covering rowing in the early going at the Eton Dorney course, just across the way from Windsor Castle. It says, optimistically, 63 minutes to get there from the Main Press Centre, or MPC as it’s called, and 69 minutes on the return. Add another 45 minutes to get from the Maclean’s bureau in London, a rambling old house we’ve rented near the Tufnel Park Underground Station on London’s Northern Line, and another 30 minutes for various security pat-downs, and it turns into an epic journey. And that’s with media buses using the already-hated Olympic lanes. It offends my egalitarian nature to speed past the rest of the snarled London traffic, but without those lanes the television-dependent Olympic schedule would collapse in a smoking ruin.

Also in the bag is the media handbook, with the competition schedules and venue maps for some 37 events. And the essential city A-Z map directory to navigate the tangle of spaghetti streets that is London.
There’s also a reporter’s notebook from McDonald’s, a pen and a menu of the services at the 31,000 square-metre MPC, located in the confines of the Olympic Park. It’s our own 24-hour-a-day world of restaurants, bars, a pharmacy, bank, gift shop, medical clinic, and plenty of work space, now filling up with writers and photographers. There’s a massage centre, where you pay by donation, a “quiet room” if you wish to catch a nap (not us, boss!) and a free hair salon/barber shop that I expect will be heavily used by the beautiful people working next door in the mammoth International Broadcast Centre.
I wander up to the Canadian Olympic Committee offices in the MPC where I’m offered an umbrella. If I were a cynic I’d say that was Canada’s way of poking fun at the Brits who lambasted Canada for the rain that hammered Cypress Mountain during the Vancouver 2010 Olympics. But perhaps they’re just to shelter us from the sun?