When she wasn’t fighting fires, “Cins” marched in the Honour Guard—and to the beat of her own drum 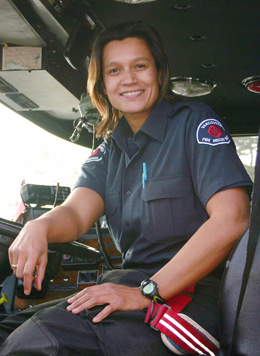 Cindy Kampmeinert was born on Nov. 14, 1967, in Hellevoetsluis, an island town in the Netherlands. A mix of Dutch and Indonesian, she was an adorable child, with olive skin, deep brown eyes and a matching head of hair. Everyone called her “Cins” for short.

“Baby Cins” (and later, “Big Cins”) was only five when her parents, Ralph and Emelie (née Van der Star), immigrated to Canada and settled in White Rock, B.C., where “Papa” found work as a land surveyor in the nearby city of Richmond. The new kid in the neighbourhood had no trouble making friends. Forever smiling, she was confident and athletic—and far more comfortable playing sports with the boys than playing house with Monique, her older sister. “They were complete opposites,” says Cindy’s brother-in-law, David Williams. “Literally, Monique was the girl and Cindy was the boy.”

School was not Cindy’s strong point. She adored her teachers—and the feeling was mutual—but sitting through an entire math lesson was pure torture for a teenager who, like her father, would have much rather been camping or fishing. By Grade 9, Cindy was skipping classes (except gym, of course) and flunking exams. At 16, she climbed behind the wheel of her dad’s Volkswagen Beetle and embarked on her first solo road trip—to San Francisco.

Nobody was shocked. Or particularly angry. It was just another example of Cins being Cins: the harmless, free-spirited wanderer who craved adventure, yet for some reason volunteered to join the naval cadets—and never missed a marching practice. She was nothing if not unpredictable.

In her 20s, Cindy journeyed back to her native Holland to study carpentry. She later returned to B.C. as a certified cabinetmaker, but it was only a matter of time before the ever-restless Cins longed for something more. “As much as she loved woodworking, it didn’t really bring her the personal satisfaction she desired,” says Alannah Holdgate, whom Cindy often described as a surrogate mother. “She wanted more than just a job.” She wanted to be a firefighter.

It would not be easy. Women—especially openly gay women like Cindy—are a rarity in the brotherhood of firefighters. But Cins was so determined to break the mould that Alannah offered to pay her tuition to the training academy in Arkansas. “Picture this larger-than-life gay female going to Arkansas, which Cindy described as the most redneck place on the planet, and managing to get through their fire school,” Alannah says. After graduation, she landed a job with Vancouver Fire and Rescue Services.

Her new colleagues—“My boys,” as she affectionately called them—embraced her immediately. She was tough, sincere, hilarious, and hard-working. Famous for her “Cindy-isms” (“Suck it up, Buttercup!”) she liked to describe her job this way: “I put the wet stuff on the red stuff.” But Cins did so much more than that. She joined the Honour Guard, the volunteer unit that carries thecaskets of fallen firefighters. She convinced the chief to loan her a fire engine for the annual Gay Pride Parade. And every shift, she risked her life to save others, responding to horrific scenes of carnage and death that would disturb even the most seasoned paramedic.

When she wasn’t at work (or in the kitchen whipping up her latest secret recipe), Cindy was outside. “One day she would be hiking with her dog, Bindi Sue, on the North Shore Mountains, and the next day she would be paddling on her outrigger canoe on the waters of Vancouver,” David says. “There was nothing she would say she couldn’t do—or at least try to do. To say she was larger than life seems so trite, but she truly was.” In November, just before leaving on an extended vacation through Nepal, India and Australia, Cindy asked her friends to donate a few dozen toques. She lugged them overseas, found an orphanage in Kathmandu, and donated the hats to the children.

On Dec. 13, Cins was travelling through Goa, India, on a rented motorcycle, and like she does on all her excursions, she stopped by the local fire hall to say hello. After a quick tour and a few pictures, she climbed back on her bike and waved goodbye. Exactly what happened later remains unclear, but sometime that day her motorcycle collided with an oncoming bus, knocking her unconscious. Over the next seven hours, Cindy was refused service at three different hospitals, despite the heroic efforts of a complete stranger—a 22-year-old British tourist named Jessica Reece—who stayed by her side the entire time. Cins never woke up. On Dec. 22, her body arrived back in Vancouver. Fellow members of the Honour Guard were waiting to meet her.