‘Courage and truth’: What Sandy Hudson and Ravyn Wngz hope to see in 2021 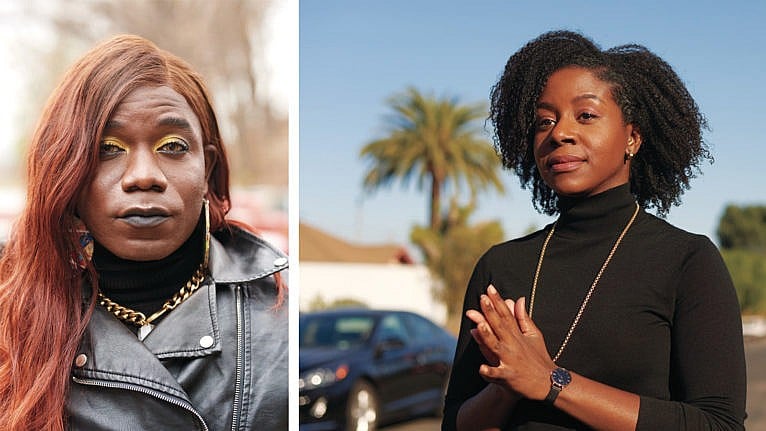 Sandy Hudson is a co-founder of Black Lives Matter Toronto (BLM-TO) and a bestselling author and public intellectual who is currently living in Los Angeles. Ravyn Wngz is a Black Renaissance Movement storyteller and thought leader who was born in Bermuda, grew up in Atlanta and now lives in Toronto, where she is on BLM-TO’s steering committee. The two spoke on Nov. 8 via Zoom about their hopes for next year.

Sandy Hudson: Here we are at the close of 2020, which I think is going to be one of those years that is talked about for a long, long time, kind of like how we talk about 1968. It has been an exhausting year, a bizarre year, and it’s been a very generative year. I look back at all the things we did together this year, working through Black Lives Matter, and it’s a mix of feelings, you know—I’m disappointed, I’m really sad and devastated, and I’m also really encouraged and really inspired, as I always am by Black people and what we manage to do.

Ravyn Wngz: It’s got me thinking a lot about what next year is going to look like. I used to say that Black Lives Matter Toronto, specifically, were like the great historians. But I think I was wrong in that assessment. I think it’s more like we’re futurists [looks exhausted]. When you think of next year, what are you hoping the conversations will be like?

S.H.: From the beginning of Black Lives Matter, we have been shifting where the public is able to have conversations. Back in 2014, people didn’t have an understanding of anti-Blackness as a specific manifestation of racism. We shifted that conversation. And 2016 was really when we started to push the defund the police message. Now we’re in a place where it’s much more acceptable to have a conversation about defunding the police and even police abolition. Next year, I don’t want to be having any more debates about police. I want it to be understood in society that, you know what? We have let this s–t go on for far too long and the cost is far too high.

R.W.: Right. And now we have Joe Biden with the most votes in history for a U.S. president. Joe Biden and Kamala Harris. And 75 million people voted for him. But 72 million voted for Trump.

R.W.: Right?! We’ve spent so much time trying to appeal to the humanity of the people who voted on that red side, who stand in solidarity with white supremacy, for the sake of their own selfishness. But it didn’t matter. I feel like there’s so much attention on unity and coming together, but it’s an illusion, it’s always been. I don’t think people are being honest enough about how they actually feel, what they truly believe in. I think people are aware of what they feel like they’re supposed to say in public, but behind closed doors they vote for white supremacy and work to uphold it. I want new conversations about building, reimagining what care looks like, what justice feels like. I don’t want to get lost in the conversations of distractions, like, “How do we keep ourselves safe if the police are defunded?” Or the idea that reform is the only way forward, there are just a few bad apples, it’s capital over people and prisons are an answer to public safety.

S.H.: Folks in power say, “Well, you want to defund the police. What exactly is the system going to look like once that’s done? Where is the plan that you have built out and costed? Go do your homework, and then maybe I’ll talk to you.” These politicians, these folks in power, they are paid to figure this stuff out. There’s a whole bureaucracy. There are people who have whole jobs dedicated to building a better society. Look, when COVID came down, the government came up with all of these different programs to help businesses, like the Canada Wage Subsidy. Do you think they went to Amazon and said, “Hey, can you just go cost it all out? Can you cost it all out for us and come up with the plan and exactly what it needs to look like before we’re able to do anything to take care of the economy and how it’s going to impact the richest of the rich?” Did they do that? No, they didn’t. I don’t want that any longer to be a part of the conversation. As activists, as members of the community that are being negatively affected, we’re pointing it out, and we’re saying, “This is bad.” So, go forth and build, people whose job it is to do that.

RELATED: ‘I believed that I could never be a representative of Black liberation’

S.H.: How do you feel about politicians and police chiefs who might kneel at rallies? We see that all over the place. I feel like people think that they can just be against racism. Like, “Hey, I am not racist, and I will prove it by showing you my Black friend, and going to this rally and kneeling, and then going home and checking off my checklist of things I need to do to prove that I don’t hate Black people today.” Oh, that makes me sick. What do you think?

R.W.: It makes me sick. It makes me frustrated. I’m tired of it. I want it to end. I want us to call it out in really particular ways and for those politicians to really think about what they’re actually doing. You can’t backseat-drive activism. So you’re going to kneel when we watched a Black man die that way, and you think that’s something that we want to see? You can’t even bring yourself to understand that seeing a police officer in the same position that took a man’s life [pauses] is something that wouldn’t make us feel like you were in solidarity with us. Like, you are protesting yourself? What you need to do is go back to your office and protest what’s going on there. I think it all needs a redo. It’s like when you said some time ago, we need a radical commitment to conflict. That’s 2021.

S.H.: Well, here’s what I’m confident of. Here’s what I know is going to happen. We will take care of ourselves.

S.H.: Let’s look at what we did in Toronto this year. How many people did we help with our COVID relief fund? Where the government failed in getting money out to people who desperately needed it in Black communities, we had a lot of people donate to this fund [and] we were able to get money and food directly to families that needed it. I’m so confident that we will continue to take care of each other.

R.W.: There’s so much knowledge from our histories, that if we allowed ourselves to learn it, to understand it—I mean, before colonization—then we could really rebuild and restrategize ways of care, ways of community accountability, raise this level of humanity, acknowledgement of humanity. And then also get more people involved.

S.H.: I hear you. We need to build more power and we need to increase political education. I’m looking forward to resourcing as much as possible and building the strength of Black activists across the country. I think that we need to connect more. You know, there were over 70 protests across Canada.

R.W.: You know what? I am hopeful. I’m hopeful that Black people will actually start to see the power that they have and will utilize that to help liberate each other. I’m excited about 2021. We have to reckon with every part of who we are, how we are engaging with the land, with each other.

S.H.: I don’t want to have to force anyone—whether it’s media or politicians or any other actor or anyone with power—to reckon with the truth. I don’t want that any longer. This is the weekend where the results have been announced of the United States presidential election. We’re having a lot of conversations where people are like, “The American people have chosen unity. And the American people have chosen to build. The American people have chosen . . .” And I’m just like, that’s not what’s happened. Actually, people came out to vote against Trump, and a lot of people came out to support the type of white supremacist manifestation of politics that Trump represents, that [Jair] Bolsonaro, that [Narendra] Modi represents. This is a global issue. And we have that element happening here in Canada, too. And I want us to be able to face those things and have conversations about it so that we’re not stunned, shocked, surprised, every single time something happens. Let’s actually work on prevention. Let’s actually work on dealing with these problems before they manifest in deaths for Black people. That’s what I want to manifest: courage and truth for 2021.

This interview appears in print in the January 2021 issue of Maclean’s magazine with the headline, “‘Courage and truth.’” Subscribe to the monthly print magazine here.