David Letterman: A king of comedy takes off his crown 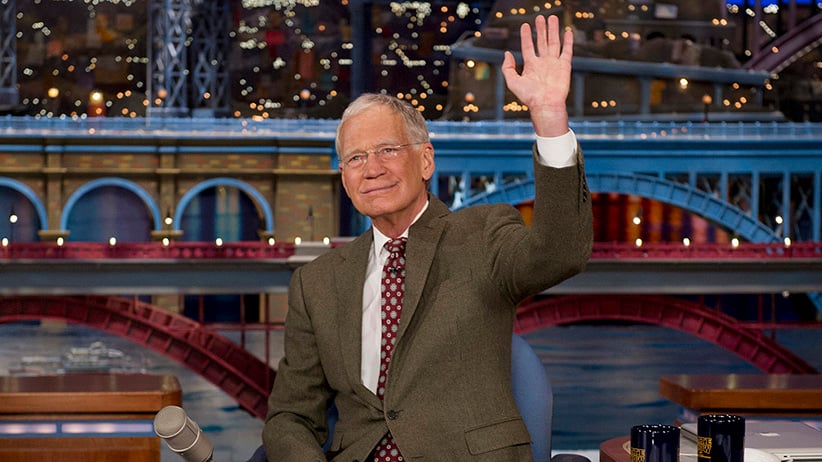 When David Letterman ends his career of hosting late-night talk shows in May, there will be more tributes to him than any retiring host has gotten since Johnny Carson. He already got plenty of them after he announced his retirement: His ABC rival, Jimmy Kimmel, called him simply “the best there is and ever was.” People who grew up watching him on CBS might not understand what all the fuss is about, though. Late Show with David Letterman has been built on Letterman’s image as a cranky old host who never seems to be trying very hard. But before that Letterman, he was a different host on a different network, and that guy was the most influential person in comedy.

“My formative comedy experience was making a movie about trying to get on his show,” says comedy writer Mike Royce (Everybody Loves Raymond), who, like many college students of the ’80s, was a fanatical Letterman viewer. And that’s where we have to look to understand Letterman—and modern comedy in general. Letterman went from a well-regarded comedian to an international celebrity in 1982, when NBC launched Late Night with David Letterman, airing after the hugely popular The Tonight Show Starring Johnny Carson. It soon became maybe the most influential comedy show of the era: With Saturday Night Live and SCTV passing their prime years, and sitcoms in a rut, Letterman’s show was what people watched when they wanted to prove their cool taste in comedy. “My friends and I, early on, were Saturday Night Live adopters, then Fernwood 2Night adopters, and then Letterman adopters,” Royce says.

The show was so popular, it even launched the career of Letterman’s biggest rival: a comedian named Jay Leno who was Letterman’s most frequent guest. Yes, not only was Letterman edgy in the 1980s, Jay Leno was, too. So what was it that made Letterman’s show so different, even though it had exactly the same format as every other late-night show? Well, it helped that Letterman was aware that the format was a cliché, and he wanted us to be aware he was aware. “It was the first talk show that looked at the conventions of the genre as components to be deconstructed, commented upon by the host, altered,” says television critic Ken Tucker. He would interrupt what seemed to be a conventional monologue with interjections from the audience or his recurring characters, such as the bespectacled nerd known as Larry “Bud” Melman. He also started making fun of interviews: “He didn’t mind making guests, or the audience, uncomfortable. Himself, not so much,” Tucker says. It helped that, unlike most talk shows, Late Night was forbidden from ripping off Johnny Carson’s Tonight Show. Carson turned late-night talk into an unironic celebration of old-fashioned show business; Tucker describes it as “a place to gather power around himself without seeming egomaniacal or self-absorbed.”

But, even if Letterman had wanted to do that kind of show, it would have been vetoed: “Carson, who had approval of the show that came on after his, sent word that we couldn’t do signature Tonight Show things, like have the announcer sit down as a sidekick, or have an opening monologue,” recalls Merrill Markoe, then Letterman’s head writer. “So I remember thinking, ‘Well, gee . . . If we can’t do those things, I guess that just leaves us with . . . uh . . . everything else in the whole world.’ ” That meant portraying himself not as the king of show business, but as a Midwestern guy uncomfortable with the old-fashioned, self-aggrandizing talk-show form. Everything on Letterman’s show was, at least in part, a parody of things the writers and viewers had seen on other talk shows. Carson liked to have funny animals on his show, so Letterman had “stupid pet tricks.” There was also plenty of mockery of local news and man-in-the-street interviews: “Dave and I wanted to pull lots of stuff in, which is why we were reading little local newspapers and doing ‘small-town news,’ and going out every Friday to do remote segments, and having people from the audience on,” Markoe says.

For viewers who had grown up knowing the conventions of TV, Letterman showed he was aware of all of them and was willing to make fun of them. “You related, because you were a TV kid,” Royce says. “You grew up with TV, and he was the TV guy. He was making fun of the shows on the air, the executives, the slimy nature of the business. It was part of his cynical take on everything.” But, despite the hip, ironic style, Late Night was still a mainstream network television show, at a time when many more people watched network TV than they do now. “He was a real mass entertainer doing cultish comedy, a rare, ﬂeeting, perfect blend,” Tucker says.

The result was that, unlike today’s cult comedies, which usually have small but loyal audiences, Letterman soaked nearly an entire generation in his self-aware approach to television. A theme that runs through every history of late-night TV is that just about every comedian who watched it in the ’80s is a worshipper of Letterman. Bill Carter, author of The War for Late Night, refers off-hand to Jon Stewart as “another young comic heavily inﬂuenced by Letterman,” and the latter influenced The Daily Show’s deadpan field pieces and the host playing straight man to a wacky supporting cast of correspondents. Tucker says the most obvious example of a Letterman acolyte is Jimmy Kimmel, “since Kimmel talks so much about studying Dave.” And the man who took over Letterman’s NBC show, Conan O’Brien, spoke of Dave in terms you usually reserve for Nobel Peace Prize winners: “Living in his shadow has been a burden and an inspiration for me for years,” O’Brien said in his last Late Night. A show like The Simpsons, for which O’Brien wrote, might have been very different if the writers hadn’t been familiar with Letterman’s pop-culture references and surreal moments, such as Chris Elliott showing up to do a parody of William Shatner singing Rocket Man. “As far as stand-up goes, I think he had a huge impact [on] people being self-referential, instead of being Vegas-y,” Royce adds. “There was something very user-friendly about him. Not counterculture, but still rebellious.”

While Letterman’s style seeped into modern comedy in all kinds of ways, there’s one place where it never quite caught on: the flagship, 11:30 p.m. talk-show slot occupied by The Tonight Show. When it came time to choose a successor to Carson, NBC chose Leno, who was considered a more traditional comic who worked harder to appeal to a broad age and geographic range. Letterman quit NBC and took an offer from CBS to create the first true competitor to The Tonight Show. But, in moving to the new network and the earlier time slot, he reinvented himself as a less ironic, less self-consciously hip figure. His famous moments on that network, such as his speech after 9/11, or his confession to adultery after a blackmail attempt, were about self-revelation; he left the meta-humour and filmed bits to younger comics who were influenced by him. That means we may still be waiting for someone to continue the revolution Letterman started.

His replacement on CBS, Stephen Colbert, has built his career on expanding what Letterman did: If Late Night was partly about “taking established forms and dismantling them to amuse or discomfit the audience,” The Colbert Report is entirely a self-aware parody. It’s too early to tell if Colbert will be willing to parody the conventions of Late Show in the same way. But, if he does, it will owe a lot to early Letterman.

As for Letterman himself, his recent work may always be overshadowed by his early legend, and people worship him more for what he once was than what he is now. “His sense of humour is still extremely bent, and that shows up sometimes,” Royce says, “but he’s been doing it for 30 years, so there are things you see over and over.” It may be enough, though, that his style has become part of the DNA of so many comedians; like other revolutionaries, he became mainstream enough that he no longer looks so different. “He was a genius, but he made it look like he was a regular guy saying stuff that came into a regular guy’s head,” Royce says. “Then I went out on stage and bombed and found, ‘Oh, this guy’s much smarter than me.’ ”