Down two and short on magic, Jays head to Texas 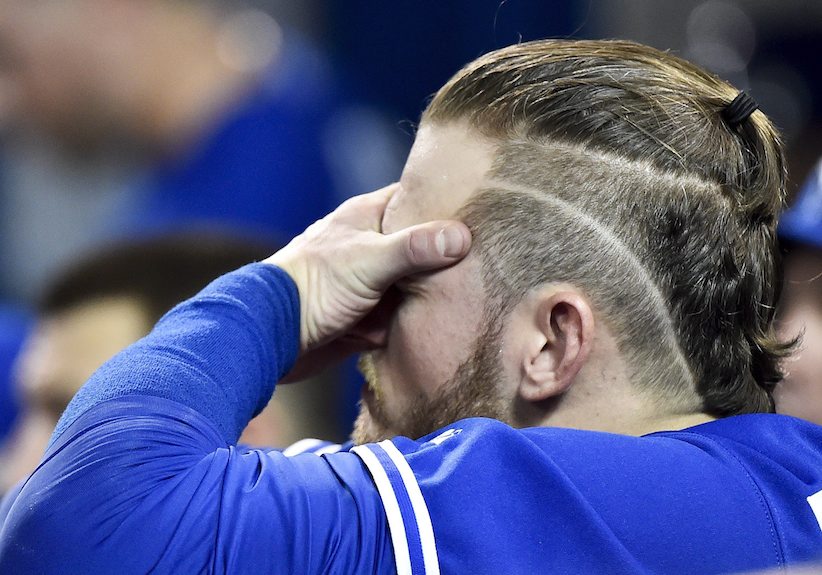 By the 14th inning, the only question left for Toronto Blue Jays fans was happy drunk or sad drunk. A playoff game that began in the lunch hour had stretched until dinner time. The bullpen had been emptied, the bats had grown cold. Momentum had been won, lost, recaptured, and left to die on an ice floe. And still the score remained knotted at 4.

In the end, the answer was sad drunk. Or maybe dead drunk. LaTroy Hawkins—fittingly, the oldest active player in Major League Baseball at 42—got the first two outs and could go no further. Rougned Odor legged out an infield single. Chris Gimenez moved him to second with a bloop to right field. And then Hanser Alberto, the Texas Rangers’ number nine hitter, brought him home for a 5-4 lead.

Toronto fans will complain—bitterly, with tears in the their bloodshot eyes and lots of slurring—that Odor was actually picked off at 2nd base on a throw by Jose Bautista for the third out. But the umps, and the MLB replay review crew, didn’t agree. Delino DeShields later singled home Alberto for a 6-4 lead.

And in the bottom of the 14th, as the game staggered toward the five-hour mark, the Jays went quietly, without much fuss. Troy Tulowitzki went down on a called third strike. (The replay showed it was clearly off the plate, but Vic Carapazza’s erratic strike zone was an irritant to both teams, all day long.) Justin Smoak went down swinging for the second out. And the fans started heading for the exits and the thankful part of Thanksgiving Weekend. Russell Martin being hit by a pitch only delayed the inevitable. Kevin Pillar struck out at 5:42 p.m. at the game was finally over. Rally towels rained down from the 500 level of the Rogers Centre. The Jays were down 0-2 in the best-of-five American League Division Series. Jesus wept.

The day started off poorly for Toronto. Marcus Stroman, who had been dominant in his only four starts of the season since coming back from a torn ACL, looked a little too hyped, and gave up two runs on three hits and an error in the top of the first.

But in the bottom half of the inning, Josh Donaldson hammered a 3-2 pitch over the centre field wall for his first-ever post-season home run, and cut the lead to 2-1.

The Rangers came back and added another run in the top of the second, for a 3-1 advantage. And if it wasn’t for a couple of incredible defensive plays by first-baseman Chris Colabello—a bare hand grab in the first, and a sprinting double tag out in the second—it would have been worse.

The Jays tied it up in the bottom of the second, after a Tulowitzki single on a fielding error by Alberto, then a double from Colabello, and a single by Martin.

In the fifth, Toronto took a 4-3 lead when Ben Revere singled home Kevin Pillar from third. But that was the end of the good times. Stroman held the line until the top of the eighth, then gave up a single to DeShields and gave way to Brett Cecil. Shin Soo-Choo moved up the runner with a sacrifice bunt. And then pinch-hitter Mike Napoli singled to bring DeShields home. Tie ball game.

Toronto had plenty of chances to come through. In the eighth, Ben Revere was in scoring position at second with one out and Jose Bautista at the plate. The slugger struck out swinging. And then after Texas intentionally walked Edwin Encarnacion, Tulowitzki grounded to second for the third out.

In the 12th, Colabello singled up the middle on the first pitch. Pinch runner, Dalton Pompey, stole second and then third. But the Jays couldn’t bring the winning run the final 90 feet.

The task that Toronto faces—winning three straight games, two of them on the road in Texas—isn’t impossible. After all, this team had two 11-game win streaks this season. But the magic that was so abundant in the second half of the season, when the Jays came from eight games behind the New York Yankees to win the AL East, suddenly seems to be in short supply.

The bigger story was written in the stands over these two playoff losses. Spelled out on the backs of fans were the names from the long-gone glory days—Winfield, Carter and Alomar. There were also a few reminders of the dark age since—Morrow and Arencibia. And all the new hopes, and dollars, invested in Bautista, Donaldson and Tulowitzki.

It’s been 22 years since Toronto last won the World Series. And right now, it looks like it will be at least one year more. Bottoms up.