An abandoned dam in Washington state may be the only thing barring chinook and steelhead trout from the upper reaches of B.C.’s Similkameen River. If you tear it down, will they come? 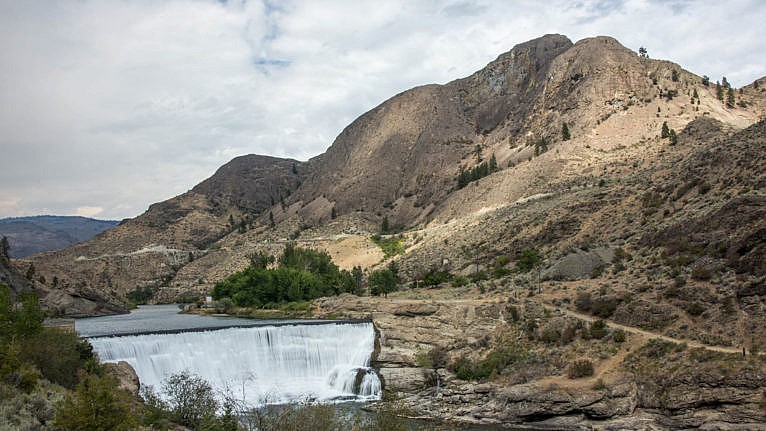 Over three weeks in 1976, conservationist Mark Angelo paddled the length of the Similkameen River. Beginning at its headwaters near British Columbia’s E.C. Manning Provincial Park, he splashed his way along the nearly 200-km waterway that winds through the Similkameen Valley and down into the United States, riding a current fed by snowmelt that trickled from the mountains on either side of the riverbed.

On his travels, Angelo spotted eagles and osprey in the skies; black bears and bighorn sheep on the shore; trout and whitefish in the river—but no salmon. He met Indigenous Elders on the Canadian side of the border who described seeing salmon in the river in the early 1900s, but the fish had long since disappeared.

As Angelo crossed the border, he came across an interruption in the natural river, just upstream of Similkameen Falls: the Enloe Dam, a 16.5-m high concrete wall spanning a narrow neck of the valley. It had sat idle for nearly two decades, which Angelo says “really bothered” him. “To think you had a dam that was no longer operating, yet continued to have adverse environmental impacts, is something that didn’t make sense to me.”

Today, the dam remains unchanged. Angelo, who is B.C. Rivers Chair of the Outdoor Recreation Council of B.C. and a recipient of the Order of Canada for his river conservation efforts, wants the governments of B.C. and Washington state to work with Indigenous governments to remove the dam and restore the river to its natural state.

The goal, he says, “is to naturalize the river and restore its ecosystem.” If salmon return, as evidence suggests will happen, he adds, “that would be wonderful.”

The Enloe hydroelectric dam was constructed in the early 1920s, replacing a wooden structure built after the turn of the century to power mining camps. But it has not produced electricity since 1959, when the Okanogan County Public Utility District, its American owner, deemed the facility uneconomical.

Over decades, ideas have come and gone about what to do with the structure. Efforts to revive, rebuild and sell it have failed. The only notable development occurred in 1978, when the dam and its nearby powerhouse were listed on the U.S. National Register of Historic Places.

RELATED:  Ts’eketi, the 100-year-old B.C. sturgeon that’s here to save her species

Today, the Confederated Tribes of the Colville Reservation, the 12 tribes whose traditional territories in the U.S. include the dam, are working on a plan to tear it down—part of a broader campaign to rebuild populations of salmon and steelhead trout, which have been dwindling in the area for a century.

The Columbia River watershed, which the Similkameen feeds into, is home to more than 70 large hydropower dams and many smaller ones. They’ve played a major role in reducing the waters available to salmon and other fish, contributing to decreases in stocks. In recent years, rising air and water temperatures from climate change have further diminished the cold-water habitat that salmon need to survive and spawn.

But if the salmon and other cold-water fish could get upstream of the Enloe Dam, they’d have access to enormous stretches of cooler water. A survey conducted in 1983 for the Bonneville Power Administration, a non-profit federal power marketing group that covers the Pacific Northwest of the United States, found that the Similkameen supports nearly 550 km of potential salmon and steelhead habitat, including high-quality spawning and rearing territory in B.C. and Washington state.

On the Canadian side, the Okanagan Nation Alliance (ONA) of British Columbia, which represents the Upper and Lower Similkameen Indian Bands, supports efforts to take down the dam. “The communities’ position is to put the river back to the way it was,” says Howie Wright, fisheries program manager for the ONA.

But the endorsement comes with some questions about what it means for the future of salmon in these waters. The oral history of the Syilx Okanagan, a trans-boundary nation that includes the Upper and Lower Similkameen bands and the Colville tribes, holds that salmon did not come into the upper Similkameen—contradicting what Angelo heard on his travels. According to their oral traditions, Coyote—a character who was both trickster and hero—met with different tribes as he carried salmon up the river. When he asked for a wife in exchange for fish, he was refused. In anger, he forever denied salmon passage.

Yet some evidence suggests that salmon have visited these waters in the past. Studies done at Palmer Lake, located about 25 km above the Enloe Dam, show salmon proteins deposited in the sediment more than a century ago. A briefing note prepared by the Washington State Department of Ecology points out that, as recently as 2020, chinook salmon were observed above Similkameen Falls, at the base of the dam. If salmon can ascend these falls, it’s likely that higher-jumping steelhead can as well, according to the briefing note. Video posted online in 2017 show salmonids—the family of cold-water fish that includes salmon, trout and char—jumping at the base of the dam, but with nowhere to go. The dam was built without fish ladders, making it impossible for salmon to pass.

“From a salmon perspective, there’s a lot of potential habitat in the Similkameen,” says Wright, noting that Enloe is not a large dam to remove compared to others along the Columbia River system.

Which is to say, there’s only one way to answer the question about whether salmon belong in the Similkameen: return the river to its natural state. The fish will take it from there.

This article appears in print in the November 2021 issue of Maclean’s magazine with the headline, “Free the dammed salmon.” Subscribe to the monthly print magazine here.