B.C.'s 'southern resident' orcas have been wandering far from home. Could this be the end?

The orca family known as J pod have been swimming far away from their Salish Sea digs. Will they return in 2022? 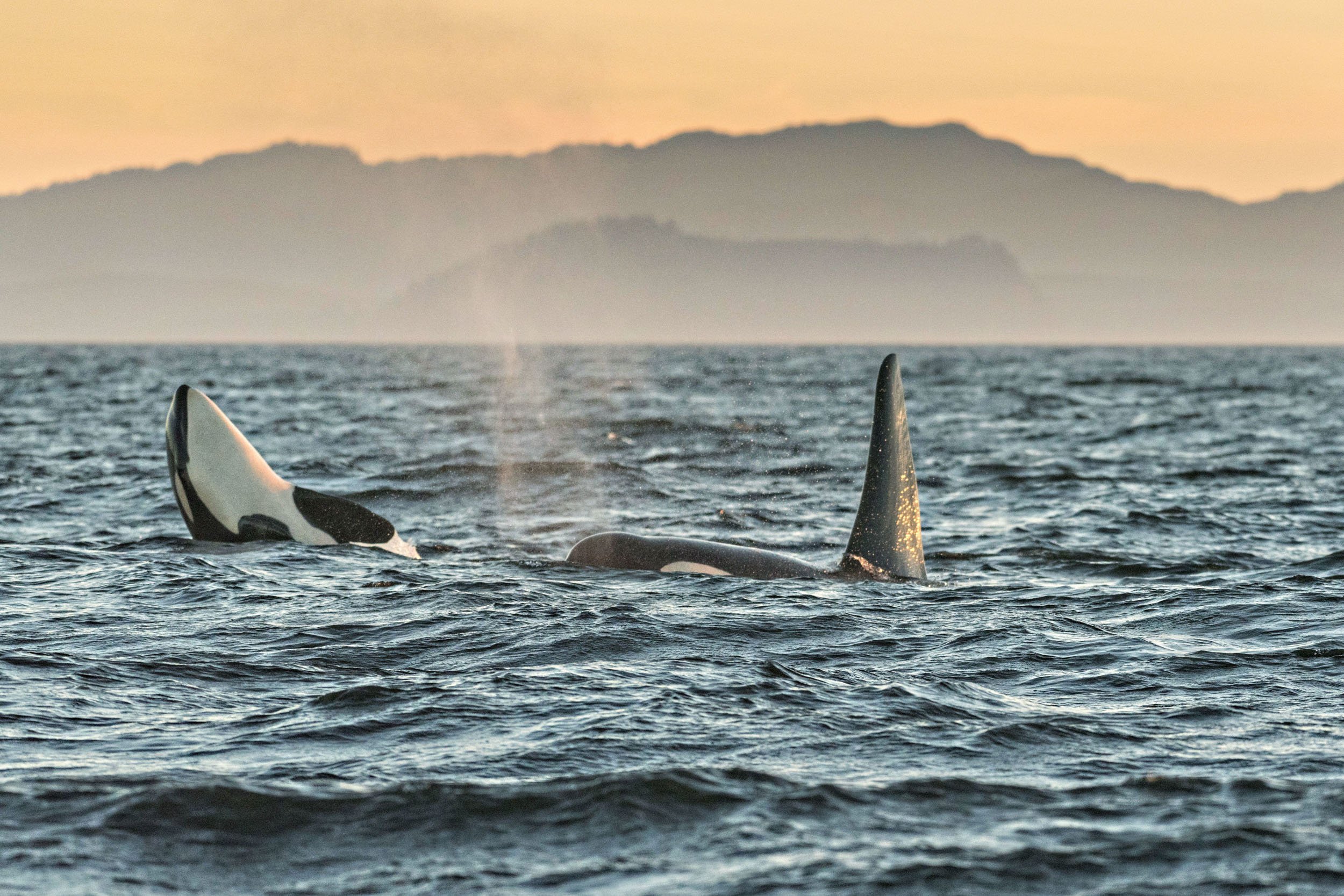 It’s one of the most jubilant rites of summer. When the world’s most famous contingent of killer whales, the J pod, comes swimming through the Salish Sea, off the southern tip of Vancouver Island, the animals churn along in a tight pack, the water frothing about them as they arc low under the surface and then vault skyward, their giant black-and-white torsos glistening and dapper, as though they’d donned tuxedos for the cotillion.There are currently 24 whales in the J pod, a group cohered by lifelong ties and led in procession, almost always, by its eldest females. Weighing over four tonnes apiece and still possessed of a Fred Astaire grace, these creatures chitter and call to one another as they ride the cold sea. Nearby, on sandy shorelines packed with tourists bearing binoculars, on docks and on ferries bound for Vancouver, the whales’ adoring public scans the water for rock stars. For each J podder has an almost human charisma. These whales are sociable like us, and they’re defined by their stories. According to legend, J2, also known as Granny, lived to the age of 105 before her 2017 death. (It’s a scientifically weak legend: she was actually more like 65, but still.) In 2018, J35, also known as Tallequah, grieved by towing her dead calf through the water for 17 days and 1,000 miles.

For decades, J-pod observers have relied on the whales to appear on the Salish almost daily from May through September. Last summer, though, the pod was absent from the area for an unprecedented 108 straight days, raising fraught questions: would they ever come back? Will we see the J pod plying the waters off Vancouver Island in 2022?

RELATED: Arctic narwhals have a new enemy: the clamour of passing ships

The short answer to both questions is yes, the beloved whales will surely be back this coming summer. Late in the summer, that is—if Vegas were taking bets, you’d do well to predict an Aug. 31 arrival. But how many more years they’ll be around is in question, while another population of killer whales will be on the sea as well. To the uninitiated, the transient orcas look the same as the residents. They too are black-and-white giants, but half again as big, with pointier dorsal fins and a more sinister aura. They move in small packs of three to six, stealthily, making almost no noise so that they can swoop into coves and bays and catch seals and sea lions unawares. The transients are well-fed and thriving.

The J pod, meanwhile, faces an uncertain future. It seems unlikely that they’ll be on the Salish Sea 30 or 40 years from now, and the group may perish altogether by the end of the century. It is, in any case, perilously small these days, for reasons pertaining to diet. The J pod, which ranges as far south as southern Oregon, subsists exclusively on the Pacific coast’s most iconic fish, the oily, fat-rich salmon. Indeed, an average J podder needs to gobble about 20 chinook salmon a day, and the chinook—an anadromous fish that grows up in rivers, then migrates to the sea—is in steep decline.

The rivers the chinook live in, the veins of British Columbia and the U.S. Northwest, are bruised. Over the past century, intensive logging has robbed them of cool, shaded backwaters in which salmon spawn. Climate change has exacerbated the water’s warming and, worst of all, hundreds of hydroelectric dams, most of them built amid the mid-20th-century craze for taming nature, now choke the region’s river system, restricting the chinook’s movement to and from the ocean.

READ: What does it take to move a rotting whale carcass? Glute strength and Vicks VapoRub.

Since 2013, the J pod has been straying from the Salish Sea because its largest adjacent river, the Fraser, has all but gone dry of spring and early summer chinook. As other rivers likewise lose salmon, despair thickens amid the J-pod faithful. It settles most heavily on perhaps the whales’ oldest human advocate.

Ken Balcomb, 81, has been tracking killer whales on the Salish Sea since 1976. He founded the Center for Whale Research in 1985, and for 35 years the group’s headquarters was Balcomb’s ramshackle cedar-shingled house on Washington’s San Juan Island, just across the binational Salish from Victoria.

White-bearded and hulking, with a quiet, scratchy voice, Balcomb arrived on the Salish after the whales had endured carnage. Up until the 1960s, salmon fishers shot at the sea’s southern resident whales—along with the J pod, this includes their close cousins in the genetically distinct K and L pods. Marine parks rounded up the orcas for stunt shows. They employed chase boats to corral the whales into bays, and then drove them into nets by throwing underwater “seal bombs” behind them.

In Balcomb’s early years on the Salish Sea, the combined population of the J, K and L pods actually climbed. It stood at 98 in 1995. Now it’s at 74. “We’re looking at the bottom of the barrel,” Balcomb says. “The whales are skinny now. Have you ever been around a horse that’s nothing but skin and bones? That’s how they look.”

It’s the gauntness that worries Balcomb most, not the J pod’s semi defection from the Salish Sea. As he describes it in his trademark plain language, J-pod fans are a bit misguided, nostalgically connecting the pod to the Salish Sea, for the animals have never carried any particular loyalty to that body of water. “They go there for the food,” Balcomb says, “not the sights.” Another whale researcher, Michael Weiss, also with the Center for Whale Research, explains the J pod’s early summer absence on the Salish this way: “If all the grocery stores and restaurants in your town closed, you’d probably move too.”

The J pod is now desperately improvising. Early last summer, it was spotted several times on Swiftsure Bank, a spot in the open ocean that straddles the U.S.-Canada border just west of Vancouver Island, and is aswim during the summers with chinook travelling to and from disparate rivers. The whales returned to the Salish Sea on Aug. 31 because the Fraser’s late-summer chinook run is still doing OK, and for a little over half of September, the Salish was able to float the J-pod meal plan. 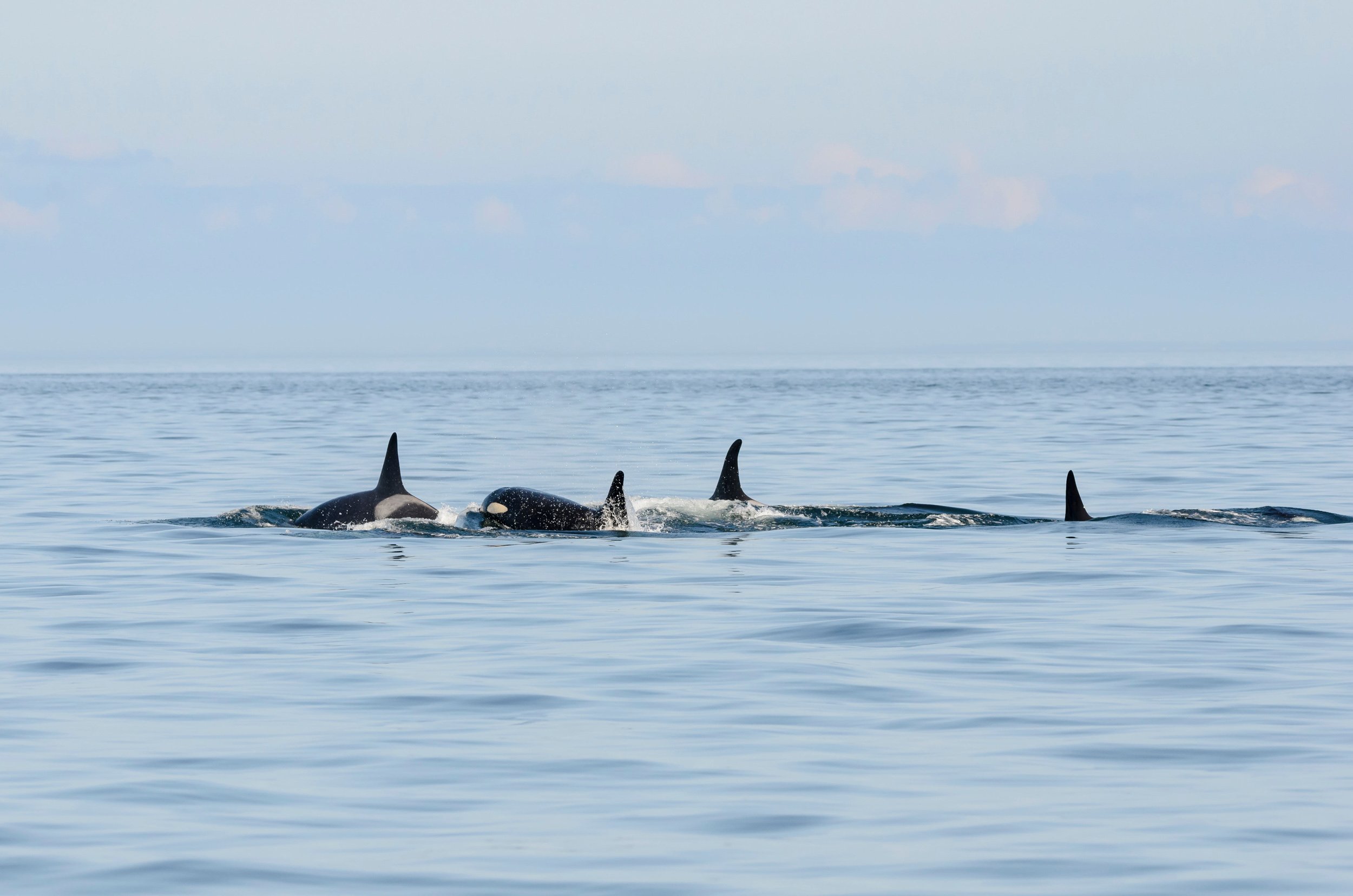 Over the coming years, the J pod could travel anywhere between northern Vancouver Island and southern Oregon in its search for food. In so doing, it would be emulating the K and L pods, which have always been less “resident” on the Salish Sea. And at least one cetologist thinks there could be hope in the whales’ adaptability. “They’re doing what they need to do to find fish,” says Monika Wieland Shields, director of the Washington-based Orca Behavior Institute. “We hope their new patterns help them to grow their population, but we don’t know if they have found something better to sustain them, and we’re waiting to see how effective their geographical shift will be at helping them increase the population.”

Meanwhile, a dark music plays in the background. In their current emaciated state, the J pod’s females are having great difficulty bringing calves to term. Roughly two-thirds of J pod pregnancies have failed since 2000, and of the 19 calves that have been born since 2010, only six have been female. The lopsided sex ratio may be caused by pollution. There are toxins in the food chain, Shields explains, among them PCBs, which still linger in nature, even though they were banned in the late 1970s. “These toxins accumulate in whales’ blubber,” she says, “and when they don’t have enough food, they survive on the fat stores in the blubber.” One theory, Shields says, is that metabolizing these toxins may result in a male-biased sex ratio.

Shields continues: “We’re at the tipping point. If we fail to give these whales the fish they need to successfully reproduce, we will not get the next generation of breeders.”

In 2018, Ottawa pledged to spend $61.5 million to help the southern residents, and since then it’s been building chinook hatcheries, restoring habitat for the fish and hiring Coast Guard enforcement officers to make ships slow down on the Salish Sea to mitigate whale stress as well as ship strikes on these marine mammals. “They’re spending a lot of money with very little results,”  Shields says, in reference to salmon-recovery efforts.

MORE: At the Calgary Zoo, the camels watch the people

Whale experts concur that the optimal fix for the J pod’s woe? is a radical one: widespread dam removal, a freeing up of rivers so that chinook can once again gush into the sea. In his wildest dreams, Ken Balcomb envisions the detonation of all 14 of the hydroelectric dams constricting the region’s mightiest river, the Columbia, where up to 16 million salmon and steelhead once spawned every year.

But the Columbia’s dams are fixtures of the U.S. Northwest economy. They’re not moving anytime soon, so the J pod’s hopes lie upstream, on the Columbia’s largest tributary, the Snake River, whose lower reaches are home to four aging concrete dams, all of them situated in the high desert of eastern Washington state. In 2019, Idaho Republican Congressman Mike Simpson joined environmentalists in calling for their removal. Simpson released a $42.7-billion demolition plan.

Shields says, “I can see those dams coming down in 10 to 20 years.” But a freed Snake River is far from inevitable, and it wouldn’t bring the J pod back to the Salish Sea anyway. It would shift these whales south, toward where the Columbia River meets the Pacific; it would also leave them hungry, if it happened in isolation.

READ: A B.C. mountain goat was the unlikely champion in a match against a grizzly

The J pod needs many more miracles to happen before it can fatten up and flourish. It needs other rivers to shed their dams, too, and it needs rivers like the Fraser to somehow shrug off the scars of development—the vast parking lots by the banks, the car washes trickling toxic suds down into what was once salmon habitat.

For now, this storied pod of whales, once the Salish Sea’s home team, has become a lean and hungry gang of freelancers searching the ocean for food that, increasingly, may not be there. And last September, as the days became shorter and the nights cooler—and as the J pod’s fans scooped up their binoculars and took to the seashore—a sad question lingered: could we be nearing the end for the J pod? Have these vaunted whales already commenced their long goodbye?

Clarification, Dec. 18, 2021: A quotation of Monika Wieland Shields in the original version of this story was framed in a way that suggested accumulation of PCBs in the whales’ blubber is known to result in a male-biased reproductive ratio. This potential effect of PCBs and other toxins in the food chain is in fact one theory for the imbalance; the quote has been reframed accordingly. Another quote from Shields about B.C. government spending has been reframed to clarify that she was referring to spending on salmon recovery.

This article appears in print in the January 2022 issue of Maclean’s magazine with the headline, “No fixed address.” Subscribe to the monthly print magazine here.