Officials are unleashing ‘Judas pigs,' which are fitted with GPS collars, eventually leading hunters to groups of their fellow swine 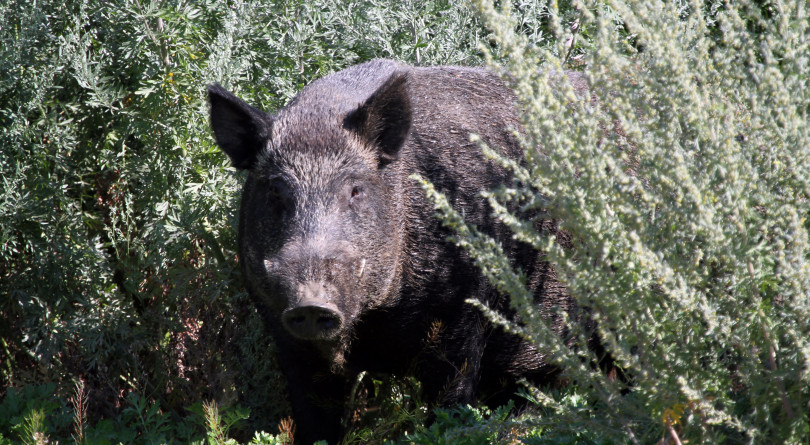 Last fall, cattle feedlot owner Jordan Kowal found part of his canola field gone—a strip down the centre, completely shredded. It reminded him that a section of his cow pasture had recently been trashed, too—left a mess of upturned soil and grass roots, as if a drunkard had taken a rototiller on a joyride. Kowal knew who the culprits were. The oinkers had returned.

The rancher has been seeing wild pigs come through the woods near his farm in Crooked River, Sask., for 15 years. The problem has become worse in the last five years, like it has throughout the Prairies. “I see them in the middle of the night—all of a sudden, you’ll see eyes looking at you. Shine truck lights at them and they scatter.” Once, Kowal’s kids were playing in the yard and a few piglets came running at them. The children left before the mother could come with her bearlike ferocity. “They’re pretty vicious animals,” Kowal says. “We’ve shot at some before, and they’ll keep coming at you if you don’t get out of the way.”

Feral swine are considered to be among the world’s worst invasive species—they destroy crops, befoul riverbanks and have spread a dreaded pig disease throughout Europe. They multiply rapidly (six per litter, once or twice a year) and are remarkably hard to kill. And they’re on the march in Canada. 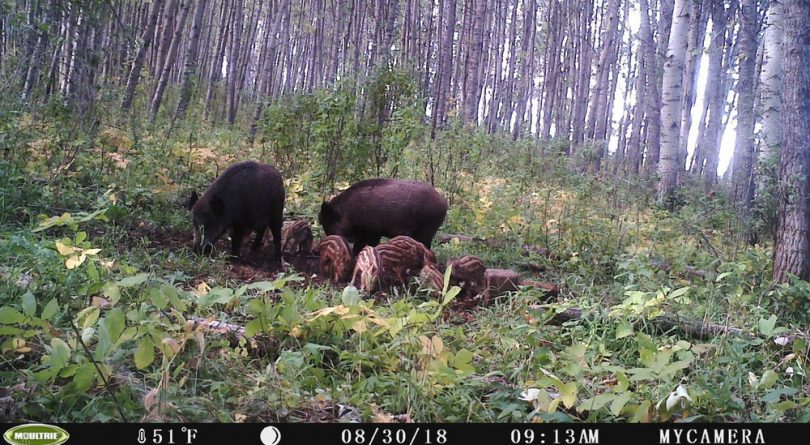 Trail camera photo of a sounder group of pigs, including weeks old striped piglets feeding intensively in the forest in Saskatchewan at 11oC (51oF). (Ryan Brook)

A study published in May in Nature: Scientific Reports featured a series of maps that show swine infestation spreading like an untreated rash across the Prairie provinces. In the 1990s, the study found, 27 watershed areas had pigs; last decade, that number leapt to 348. By 2017, there were 993 swine-infested watersheds and the pigs’ range spanned 778,000 sq. km—an area larger than Texas and New Brunswick combined. There’s no population estimate for Canada’s wild pigs, but we’re certainly not as overrun as some areas down south, like California and the Lone Star State—annual U.S. crop damage is estimated at US$1.5 billion, and collisions between vehicles and wild pigs cost US$36 million. Feral swine in that country date back to 16th-century European contact, and the population exploded in the 1980s. The problem is much newer in Canada, where some pigs first escaped or were released from fledgling wild boar farms less than three decades ago. But the increase in Canada’s wild swine is following the same trend, says the Nature study’s lead author, Ruth Aschim, a doctoral student at the University of Saskatchewan’s College of Agriculture and Bioresources. “Give that 10 more years and I think we’ll be seeing a completely different story.”

Listen to Jason Markusoff talk about feral pigs on The Big Story podcast.

Ryan Brook, her co-author and supervisor, has long tracked the rise of the Canadian boar. People send him pictures and news of sightings nearly every day: a car crash in Manitoba, a half-dozen crossing the road in northeast Saskatchewan, a hunter’s 450-lb. catch in Alberta. One Manitoba hunter reported that after he shot a deer and dressed it, eight wild pigs ran out of the bush toward him. He shot and killed one, but the rest kept coming. He kept firing until he had two bullets left and the remaining creatures scattered into the woods. Brook has said pigs could eventually outnumber the 1.17 million people living in Saskatchewan.

Provincial authorities have been trying, failing and trying again to tame the wild pig problem. Alberta used to have hunting bounties—$50 per swine ear returned—until officials concluded that shooting one or two pigs in a “sounder” (the term for a group of swine) of about 12 makes the problem worse by teaching the rest to disperse and become more nocturnal. “These animals are very intelligent,” says Perry Abramenko, who leads eradication efforts with Alberta Agriculture and Forestry. “If you don’t catch the whole sounder at one time, any survivors that escape become trap-shy.” Alberta is testing new methods, including surveillance drones and corral traps baited with oats and molasses that sometimes take two weeks to lure a full group. 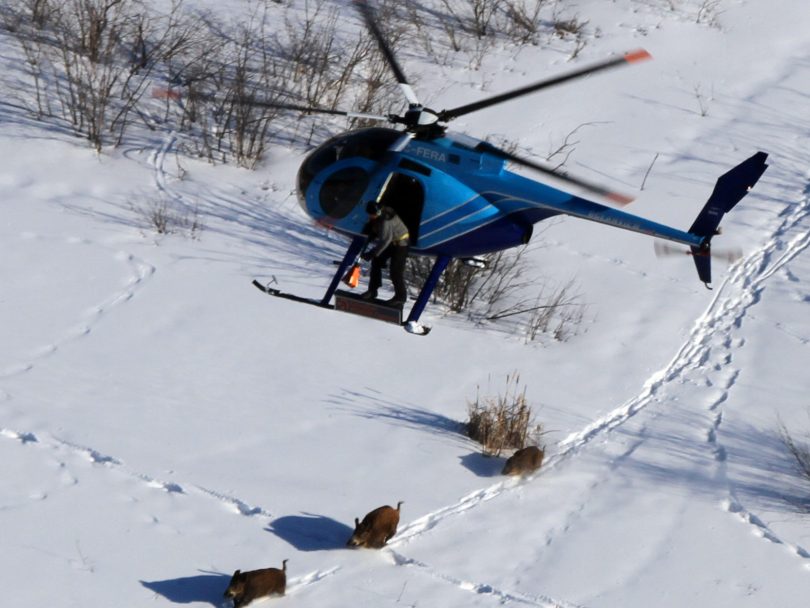 Capture of a wild pig in central Saskatchewan using a net fired from a helicopter. Once netted, the team attaches a GPS satellite collar around its neck, making this a Judas Pig. (Ryan Brook)

In Saskatchewan, Brook and provincial officials have used the “Judas pig” method. They equip one pig with a GPS collar, and when she or he finds the group, aerial hunters take out every boar but the collared one, who flees to find another sounder. The Saskatchewan Crop Insurance Corp., which manages that province’s pig-hunting teams, caught more than 100 around Kowal’s feedlot, then a team coordinator couldn’t find any more in a couple of days of scouting. Elimination is tricky, however; Kowal says he saw a few running around near his farm in mid-May. “They should have been involved five or 10 years before,” he says of government authorities.

A threat that hasn’t yet touched Canada has nevertheless sharpened governments’ focus. African swine fever, which poses no risk to humans but is lethal in a hog herd, has killed more than one million pigs in China. It has spread to several countries in Europe and is much harder to control among wild swine than farm pigs—Denmark has actually erected an anti-pig fence across its border with Germany. Canada’s wild pigs could become a “significant potential reservoir” if the virus came to the country, says Egan Brockhoff, veterinary consultant to the Canadian Pork Council. Quebec is now working on a wild pig strategy; by July 1 the Northwest Territories, watching the northward spread from Alberta, will likely declare them a pest and allow permit-free shooting; there is a growing clamour among farmers and wildlife conservationists for a national strategy. Canada’s swine-fever prevention plan will have elements addressing wild pigs, says Jaspinder Komal, chief veterinarian for the Canadian Food Inspection Agency.

Can an invasive species that reproduces so rapidly and evades capture so smartly be eradicated? Alberta, through method and determination, managed to make itself rat-free. Abramenko says it can do the same with feral swine, but it will take a lot of work, going location by location, trap by trap, night watch by night watch. And even then, don’t bet your bacon on it.

This article appears in print as a National Note in the June 2019 issue of Maclean’s magazine with the headline, “Hog wild.” Subscribe to the monthly print magazine here.