Canadians ate 4.5 tonnes of unlabelled GM salmon without knowing it this past year

The world's first shipment of genetically-modified salmon arrived in Montreal last year. After that, it's impossible to track where it went. Why all the secrecy? 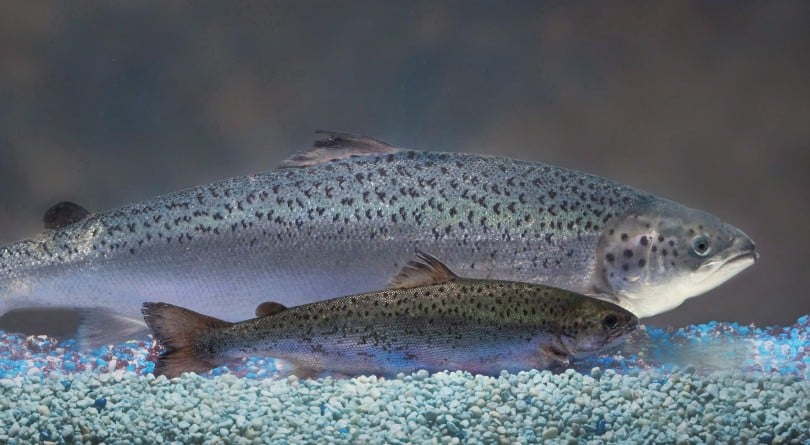 Perched on the coast of Prince Edward Island, in Bay Fortune, a biotechnology company breeds the world’s first genetically modified fish—an Atlantic salmon containing a fish gene that allows it to grow twice as fast as its non-GM cousins. In the past year, without knowing it, Canadians ate 4.5 tonnes of the unlabelled GM fish—the world’s first batches of GM animal sold for human consumption. Where exactly? No one knew, until recently, when Vigilance OGM, a food watchdog in Quebec, obtained import documents via access to information. In a $170-billion global aquaculture industry, Canada in 2016 became the first country to allow human consumption of genetically engineered salmon. Fish-farming companies and consumer groups remained wary, partly because of the controversy around labelling and the secrecy that’s shrouded the fish since research began in Canada in the early 1990s. Since then, taxpayers have forked over $8.2 million in federal grants for the fish’s development, and the Canadian government negotiated a 10 per cent royalty for itself on GM salmon sales.

The world’s first 4.5 tonnes flew into Montreal in nine shipments in June 2017, according to the documents obtained by Vigilance. It’s likely that another 1.5 tonnes arrived in Ontario in February 2018. The new species began life in P.E.I., where AquaBounty Technologies (a subsidiary of Intrexon, a biotech firm owned by U.S. billionaire Randal J. Kirk) produced the GM salmon eggs in a microscopic process inside the Bay Fortune facility. The land-based site is surrounded by barbed wire, video cameras and alarm systems to keep out nosy visitors.

READ: The decline of the Chinook salmon threatens a whole way of life

In 2013, Fisheries and Oceans Canada assessed the GM fish and concluded that the risks to human health were low, though critics say it did so with limited data and little public consultation. It gave AquaBounty the green light to produce GM salmon eggs in P.E.I., but not to grow the fish to adult size, so the company began raising them in Panama. The U.S. has also approved the fish for sale to consumers, but government agencies are still haggling over details about labelling of genetically modified organisms (GMOs). Canada and the U.S. are the only countries in the world to okay GM fish for human consumption.

Who were the customers? The company won’t say.

Import-export data indicate that a Panama-based company called Soterion Development delivered about half the 4.5 tonnes to Montreal Fish Co. and the other half to Sea Delight Canada, both to Montreal’s Pierre Elliott Trudeau International Airport. AquaBounty made about US$53,000 on the sales to Montreal and US$19,000 on more sales during the first quarter of 2018. The refrigerated salmon fillets in Montreal went to retail and food-service establishments, according to the documentation.

“The sale was very well received by its customers in Canada,” notes AquaBounty in its 2017 year-end report.

Who were the customers exactly? The company won’t say. “Our fear was that if we identified the people to whom we sold, they would be unfairly attacked,” AquaBounty CEO Ron Stotish told a BBC journalist in April. In the past, the company has blamed environmentalists for campaigns against its “AquAdvantage Salmon,” the brand name of the fish. “It is our policy not to discuss our buyers, for obvious reasons,” Dave Conley, AquaBounty’s director of corporate communications, told Maclean’s when reached by email. He didn’t reply to requests to explain the reasons, or to confirm where the fish were sold, other than to send a blog post from a pro-GMO writer claiming that environmental groups are trying to undermine the rollout of the salmon.

Sea Delight Canada, which sells tonnes of salmon in Quebec each week, denies that it was one of the customers, in spite of import documents that name it as a buyer. “Like we say in the U.S., this is fake news,” says company president Leopold Landry from his Miami office. He says that he buys tuna, swordfish and other fish from Panama, but not salmon. “We talked to AquaBounty to do something with them in the future,” Landry says. “We’ll sell this fish if customers want the fish.” But environmentalists, he charges, “freak out people” when it comes to GMO. Sea Delight’s customers include retail wholesalers, supermarket giants, food-service distributors, restaurant chains and fish traders, including Montreal Fish Co., which didn’t reply to requests for interviews, though import papers record it as receiving five shipments of GM fish in June 2017.

Confirmation that the fish were sold in Canada—and presumably eaten in Quebec and Ontario—comes at a sensitive time for the nascent GM food industry. Companies like AquaBounty have yet to win over many Canadians, despite promises that GM foods are safe for the environment and human consumption. Uncertainty about the destination of the world’s first batches of GM fish doesn’t help, as much of the public concern seems rooted in a lack of transparency and rules requiring clear labelling.

‘We don’t source salmon from these companies’

An Ipsos Reid poll conducted for the Canadian Biotechnology Action Network in 2015 suggested that Canadians are concerned about GM foods, in spite of government assurances that they’re safe. About 60 per cent of respondents opposed genetically modifying crops and animals for food; nearly half supported a ban on all GM food. More than 20 years of surveys indicate that the vast majority of Canadians want to know when they’re eating GMOs. Fully 88 per cent of those polled in the 2015 survey said they want mandatory labelling.

Their concern hasn’t escaped the notice of those who raise and sell much of the salmon consumed in this country. Five years ago, Marine Harvest, one of the world’s largest producers of farmed salmon, called for labelling of GMOs. Today, it says that it doesn’t grow, sell or research GM salmon, a policy it shares with major salmon producers in Canada. And most big grocery retailers have stated they don’t want GM salmon. When contacted by Maclean’s for this story, Metro, Sobeys, Wal-Mart and Loblaws—four of Canada’s five largest food retailers—declared that none of AquaBounty’s GM salmon from 2017 was sold in their stores, saying neither Sea Delight Canada nor Montreal Fish Co. supplied them with Atlantic salmon at the time.

“I’m happy to report that we don’t source salmon from these two companies,” says Geneviève Grégoire, communications adviser with Metro Richelieu Inc., which operates or supplies 948 food stores in Quebec and Ontario, including Metro, Super C, Food Basics, Adonis and Première Moisson. “As we said before, we didn’t and will not sell GM Atlantic salmon.”

Jennifer McCrindle, manager of external communications for Sobeys, which owns FreshCo, IGA, Foodland, Price Chopper, Thrifty Foods and Co-op, says the company has “no plans to add GM salmon products to our assortment.” A Loblaws spokesperson said the company didn’t source Atlantic salmon of any kind from Sea Delight Canada or Montreal Fish Co. in June and July 2017. Loblaw Companies owns Provigo, Fortinos, No Frills, Superstore, Maxi and T&T Supermarket, among other stores. It adds that customers looking for non-GM food should buy certified organic foods.

Costco, one of the five largest food companies in the country, did not reply to questions.

Still, in spite of assurances from salmon producers that their fish are fully traceable, consumers would have no way of telling the difference between GM and non-GM fish in the fridges of food retailers—an issue Sea Delight’s Landry wants to address. A few months ago, he called Vigilance OGM, the non-profit group that discovered the first batches of GM fish in Canada, because he wanted to co-operate. “I said, ‘Is it possible to work together, to import this thing, and to make sure we’re on the same page—and to label the product properly?’ ” Landry says, adding: “They never got back to me.”

But Thibault Rehn, coordinator of Vigilance, says it’s up to governments, not companies, to organize such a program, adding that his group is in no position to monitor them. Rehn also worries about what would happen if GM salmon somehow make it into the Atlantic Ocean, though a 2013 assessment by Fisheries and Oceans Canada concluded that the risk of the species escaping from land-based facilities was low. AquaBounty, for its part, says that nearly 100 per cent of the salmon are infertile.

Many GM opponents doubt those conclusions, citing the escape of GM strains of alfalfa, canola and other crops. This year, the Canadian Biotechnology Action Network (CBAN) joined Vigilance, the Ecology Action Centre and other environmental groups to ask Canada for increased transparency, noting that “at a minimum, Canadians should know where the GM salmon is,” says Lucy Sharratt, CBAN coordinator. “This is the world’s first GM food animal, so it highlights a number of concerns that are ongoing around genetically modified foods—transparency and environmental risks being two of them.”

Whatever side of the barbed wire you’re on, get used to hearing about mysterious new fish species, because experiments and facilities are expanding. AquaBounty began working on GM tilapia a few years ago, and other companies are experimenting with GM shrimp, carp and trout. As for salmon, AquaBounty plans more shipments this year, after new sites open near Albany, Ind., and Rollo Bay, P.E.I., with capacity to produce 13 million eggs and 250 tonnes of fish a year—about 10 times that of the existing sites.