How recycling food could help save the planet 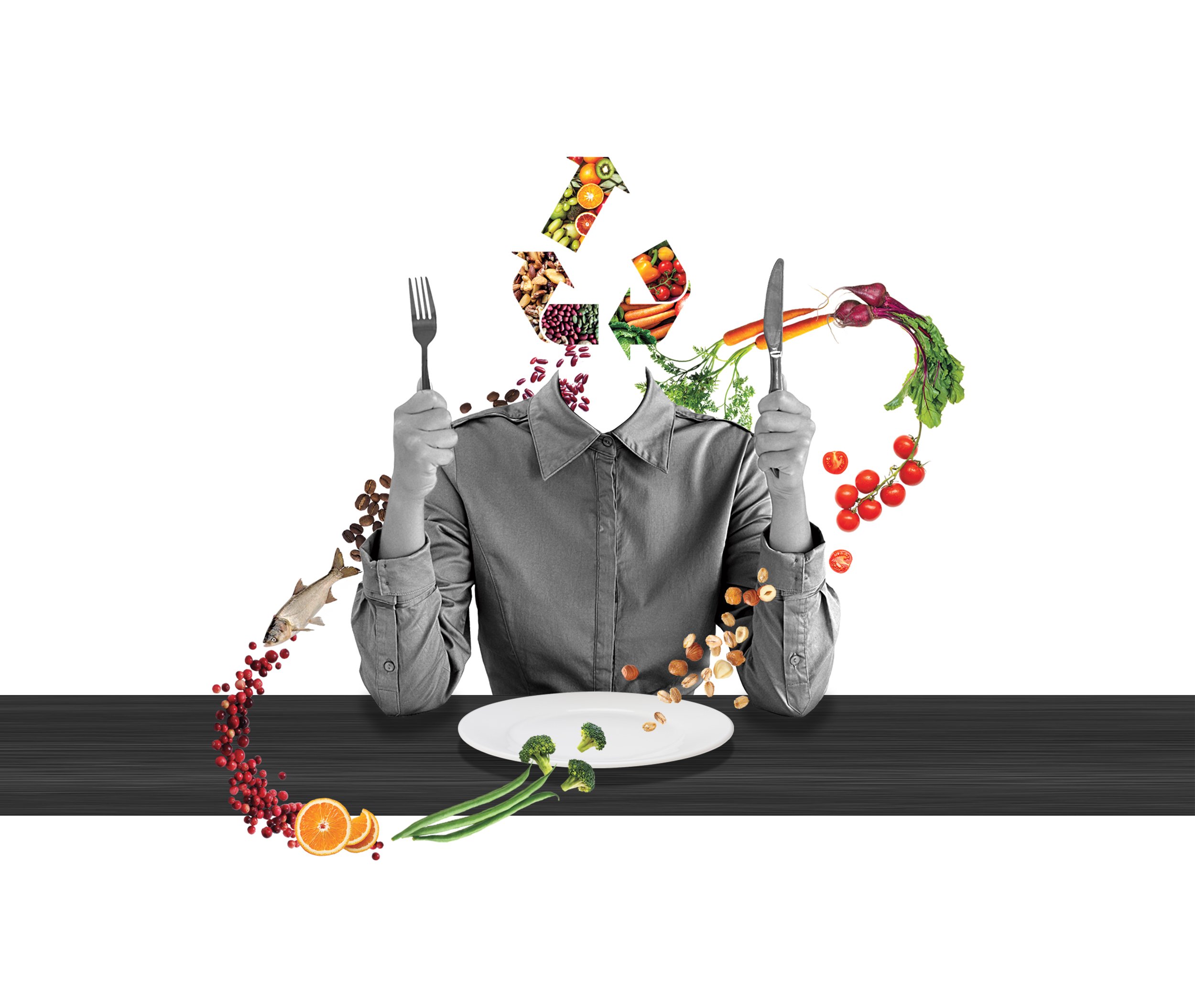 By now, it shouldn’t be a secret that the fight against climate change requires an all-hands-on-deck approach, but what about all stomachs? A wave of innovative new upcycled products indicates growing corporate buy-in for diverting all manner of edible waste—leftovers, discarded produce, even invasive species—away from landfills and back onto our plates. Companies cashing in on the zero-waste trend are both monolith and mini: take the juice giant Ocean Spray, which in 2020 rolled out Cranberry Seeds, a new offering that upcycles a key ingredient into a nutritional product; or Montreal’s Wilder Harrier, which repurposes the noted ecosystem nuisance of Asian carp into dinners—for dogs. Who says consumption is always bad for the environment?

Recycling may seem like something of an old-guard solution, but converting our personal digestive organs into rudimentary blue boxes to achieve emptier landfills is a relatively creative way to responsibly manage our food resources. According to research by the National Zero Waste Council, Canadians alone waste nearly 2.2 million tonnes of food each year; a 2019 report by the Toronto non-profit Second Harvest revealed that 4.82 million tonnes of food are lost at the processing and manufacturing stages. These revelations are particularly dire in light of the fact that more than five million Canadians regularly experience food insecurity, or a lack of reliable access to affordable and nutritious food.

In the Guelph-Wellington region of Ontario, the SEED is a social enterprise aimed at ameliorating that very issue. Before COVID halted, well, everything, manager Gavin Dandy says the organization had designs on a new suite of products made from surplus ingredients and sold on a sliding scale: the aptly named Transformation Tomato Sauce, Karma Ketchup and Spent Grain Bread, to be made from barley byproduct sourced from Guelph’s breweries. (There are plans to revive the planned product line at some point in the future.)

READ: The B.C. floods are a mere hint of what climate change could do to the food supply

“We see food waste as a source of food for everybody, not just people who are food-insecure,” says Dandy, who notes that the SEED’s annual budget has grown from $100,000 to almost $3 million in four years. “There’s a huge learning curve from a logistical point of view—how we set a value on this food, and how comfortable people are going to be, in general, with buying foods made from upcycled ingredients. But [upcycling] is going to happen until it becomes the new normal.”

Dandy is heartened that consumers are tapping into this new stream of what he calls high-quality food. This has buoyed the SEED’s Upcycle Kitchen, which has distributed more than 100,000 frozen meals (priced at $9) in the past year, along with Groceries from the SEED, an online, pay-what-you-can grocery store populated with salvaged produce. “These [programs] are examples of how we’re trying to avoid creating a two-tiered system; this food is for people who are not ‘poor’ or ‘rich,’ ” says Dandy. “We want people, all people, to have access.”

According to Will Valley, an associate dean in the faculty of land and food systems at the University of British Columbia, the strength of the repurposed-food boom might actually be that it highlights the limitations of our current food production and distribution systems.

MORE: How blockchain could revolutionize food supply chains and lower your grocery bill

“I like to think of ‘the shine in the shadow’ of these types of approaches,” says Valley, who categorizes food repurposing much in the same way as food banks—as more of a “harm-reduction” exercise than a necessary systemic overhaul. “The shine is definitely in us becoming acutely aware of some of our negative impacts on ecological systems, drawing folks’ attention to waste and inefficiencies. But managing invasive species [like the Asian carp] by finding a new input for it doesn’t address the fundamental problems our food system has: that it’s extractive, commodified and reinforces profit sharing and large power conglomeration.”

For all his skepticism, Valley says this new wave of food ingenuity has a leg up on inventions past, in that they don’t exclusively zero in on the potential for new income streams (like sexy, seed-based protein powders), but are at least working with an eye to mitigating the myriad social harms of the status quo: species migration, the destruction of biodiversity, carbon output and ever-skyrocketing grocery costs. “I always say to my students that our food system isn’t broken,” says Valley. “It’s actually working exactly how it was designed.”

As our economic imagination shifts gradually away from a linear, A-to-garbage model and toward a more circular one that sees the nutritional potential in more things, we will undoubtedly be forced to acknowledge that simply stuffing ourselves with salvaged produce isn’t the climate quick fix we’d always hoped for. The key takeaway is that we’ll be fuller, but our landfills won’t be. “We will all look back at the dark ages of wasting food and think, ‘Wow, we were really dumb,’ ” says Dandy. “‘How could we have ever done this any other way?’”

MORE: The grassroots food insecurity initiatives putting an end to the ‘starving student’

This article appears in print in the January 2022 issue of Maclean’s magazine with the headline, “Five ways with leftovers!” Subscribe to the monthly print magazine here.