With ocean preservation as a main theme in the Canada-hosted G7 Summit, creative minds in Canada and elsewhere have entered the fray 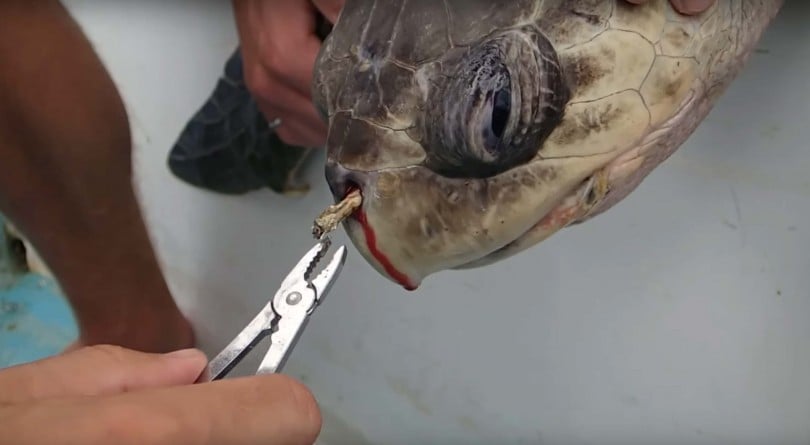 No animals were harmed in the making of “Stop Sucking,” a new national ad campaign that subverts the scourge of plastic straws with cheeky humour. This latest salvo in the war against ocean-bound plastic garbage, created by Rethink Canada as a public service announcement for the California-based Plastic Pollution Coalition, features a triptych of composite images—a swimming sea turtle, a dead seagull (killed by natural causes) and a barbecue-ready Chinook salmon—propped like pickled cocktail garnishes in tall glasses of ice with red-striped bendy straws shoved down their throats. Rolling out this week across social media, in print ads and on billboards near pubs in select downtown markets, the pro bono campaign was directly inspired by a viral video of the now-famous Costa Rican sea turtle with a plastic straw being painfully dislodged from its left nostril.

“That hit me like a ton of bricks when it first popped up on Facebook,” says Joel Holtby, creative director at the Toronto office of Rethink, one of Canada’s top advertising firms. “As creatives, we have, maybe not a responsibility, but we have a power that we can use to bring awareness to these issues.”

There will be more arresting images of dead animals and imperilled marine life trotted out before the G7 leaders’ summit kicks off on in Charlevoix, Que. on June 8, coinciding with World Oceans Day. Canada, which holds the presidency this year, has made ocean preservation one of the summit’s key themes. Environment Minister Catherine McKenna has been pushing for an international zero-plastics waste charter, similar to the Paris Agreement on climate change, and the government is expected to commit to a national plastics strategy. Whatever announcements are made, plastic pollution and recycling is not a policy issue that is being won behind the closed doors of political corridors, through shrill declarations by NGOs, or at corporate press conferences (the A&W Canada burger chain will also be revealing a big waste-reduction program in Vancouver on Friday). More than any other environmental cause since the dawning of Greenpeace, this is a campaign for which pubic opinion is being swayed and the masses mobilized through emotionally visceral and freakishly effective visual propaganda that is blurring the lines between art, activism and mass media.

READ: Why a ban on plastic straws sucks

Consider the Attenborough effect, as it is being called in Britain. The fourth episode of the BBC’s extraordinarily popular documentary series Blue Planet II featured a heart-wrenching segment of a mother pilot whale refusing for days to let go of her dead calf, which was possibly (though not proven) poisoned by her plastic-contaminated milk. After the final episode, a call to arms by narrator Sir David Attenborough, online searches for “plastic recycling” increased by 55 per cent, according to the online search behavioural specialist Hitwise, conservation groups reported huge jumps in traffic, and numerous Conservative MPs tweeted their support. Four months later, Prime Minister Theresa May outlined an ambitious plan to ban plastic straws, stir sticks and cotton buds.

In Canada, it was the video of the gasping, flinching, bleeding Costa Rican sea turtle—now viewed more than 25 million times and still being cited as recently as last week as the reason a Grade 4 classroom in Fredericton convinced its school cafeteria to stop using straws—which turned the tide of public opinion. Sarah King, head of the Oceans-Plastics campaign for Greenpeace Canada, recalls travelling through the Maritimes two years ago. “I was at a restaurant in a small town and I said, ‘No straw with my drink, please,’ as I always do. ‘Oh, did you see the turtle video?’ the server replied. That was the moment I knew the issue of plastic pollution had gone mainstream.”

On Earth Day in April, Greenpeace stepped up its #BreakFreeFromPlastics campaign with a new, open-source electronic toolkit, replete with digital teaching tools, photo galleries and videos. It has since been downloaded more than 5,000 times. While somewhat inevitable in the age of Instagram, techno-savvy digital communications for environmental causes is a rapidly growing field—and a legitimate career path. Six years ago, the Royal Ontario Museum and Fleming College co-founded the Environmental Visual Communication Program, a post-graduate certificate for students “who are passionate about environmental issues and storytelling and who want to effectively engage people to foster change.” 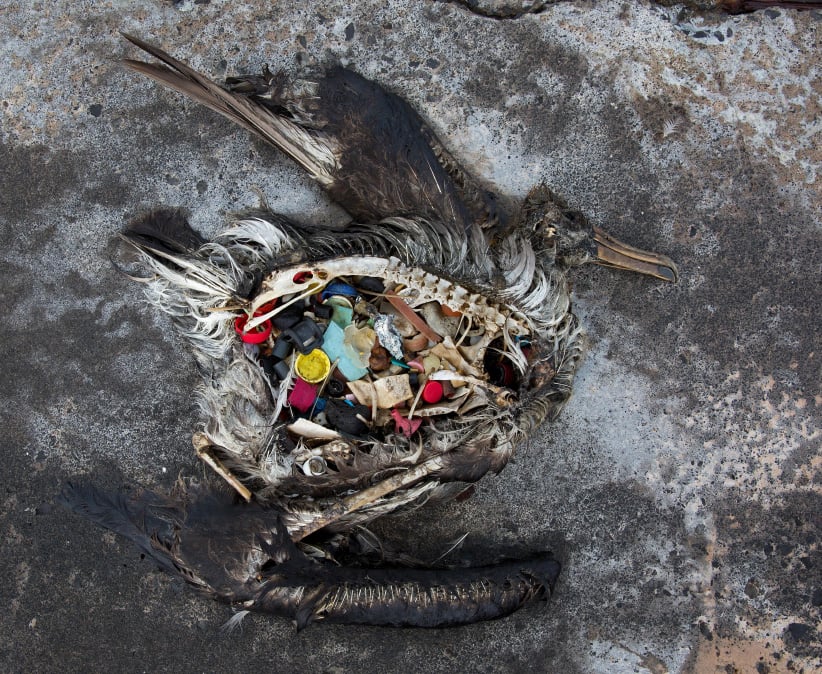 Kuma, a similar sort of innovation lab for the “creative community of world changers” was created in California by Manuel Maqueda, a Silicon Valley start-up consultant, activist, photographer and co-founder of the Plastic Pollution Coalition, one of the main advisers for the current plastic-dedicated issue of National Geographic magazine. “It’s so exciting for us to see the work of so many artists we have worked with for the past nine years in those pages,” says Emily DiFrisco, PPC’s director of communications. She points specifically to a full-page spread of another viral image, an underwater seahorse with its tail curled around a pink-plastic cotton swab, snapped in Indonesia by the U.S. photographer Justin Hofman, who has been nominated for Wildlife Photographer of the Year. “We used to be this fringy organization,” says DiFrisco. “Now everyone is talking about plastics.”

Maqueda is also the co-founder Albatross, formerly known as Midway Journey, which has been documenting albatross colonies on Midway Island in the North Pacific since 2009. The footage of dead birds, their splayed stomachs swollen with plastic bottle caps and cigarette lighters, is almost as famous as the stuffed-up turtle. A feature-length documentary, which has been distributed free for community viewings, will be screened at the United Nations for World Oceans Day.

Albatross director Chris Jordan says he was inspired to film the bird colonies when confronted with the impossibility of documenting the Great Pacific Garbage Patch, which looms large in the collective imagination as a floating island of plastic trash, but is, in reality, more of a dense plastic soup made of microscopic fragments and fibres. (This is why plastic straws have become the default poster child or gateway symbol of the movement.)

Canadian artist Douglas Coupland faced a similar challenge when trying to conceptualize the Great Pacific Garbage Patch for Vortex, an art installation currently installed at the Vancouver Aquarium. “I looked online to see what they had in Google images,” he said at a media preview last month. “There really is nothing.” 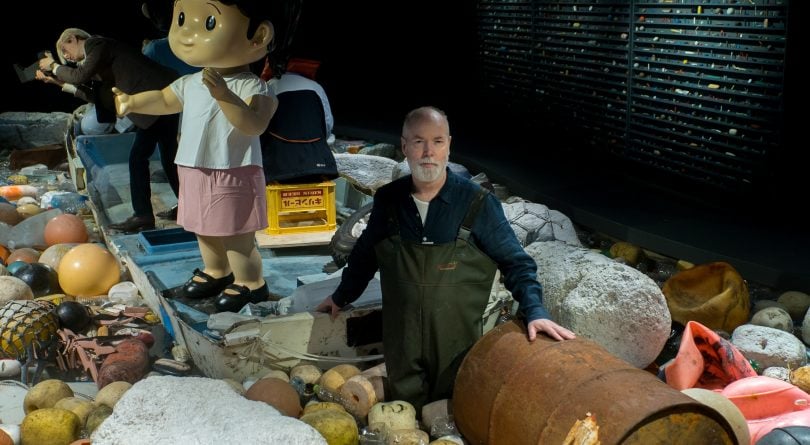 Although Coupland has had his finger on the zeitgeist ever since he coined the term Generation X with his bestselling novel in 1986, his art has never been overtly political. Vortex, which includes two giant bobble-headed plastic children sailing through a watery tank of plastic waste scavenged from the shores of Haida Gwaii, is different. He compares it to Théodore Géricault’s The Raft of the Medusa, a revolutionary oil painting of a French Royal naval shipwreck. It was art that portrayed the writhing bodies with brutal realism in a pre-photographic age for agitation purposes

“It was kind of like the Pulp Fiction of 1819,” he said, staring despondently at his show’s plastic flotsam shrouded in canned fog.  “Vortex] is in the same tradition. Are we going to live like this for the next 100 years? No, people can change. I want to be part of that change so in 10 years single-use plastic will be as obsolete as spittoons. Now go blog the sh*t out of this.”