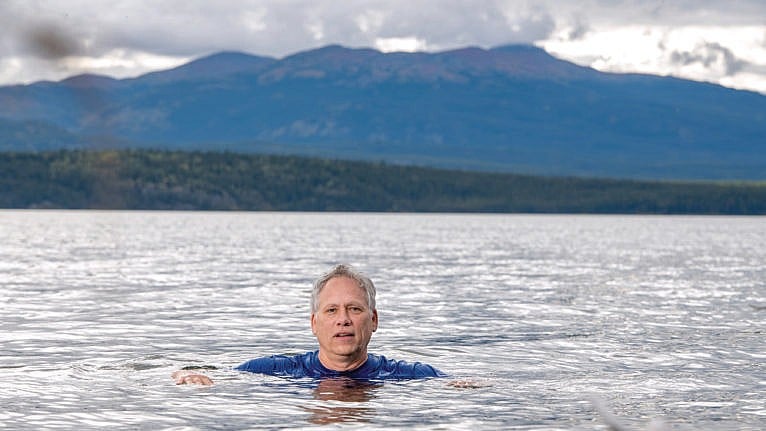 Streicker in Marsh Lake; the Yukon minister went all in on warning people about high water levels (Photograph by Cathie Archbould)

I’m a climate scientist. I’ve been working on the issue for close to 30 years now. We had a really high flood in 2007, and they had been calling it a one-in-200-year event, although I tried to explain to the government that, yeah, it might be very rare, but it’s exacerbated by climate change.

This year, we had more than twice the usual amount of snow up in the mountains, which feeds this whole lake system. Over three weeks, Marsh Lake came up two metres. I was worried the public didn’t understand how big this year’s flood was. I thought to myself, “Well, I could just show people.” My wife put on her wetsuit and came out and filmed me.

I’d taken a Sharpie and marked my leg at different times for different heights. I went in, and when I was up to my chin I said, “In an average year, the lake would be down at my feet.” I’ve been tracking the lake levels and plotting them against the 20-year average, so I know these numbers well.

As you’re talking to people, you’ve got 100 to 150 homes that are at risk of completely flooding. This was one of several ways that I tried to help. I wasn’t thinking about it as [being for] a national audience.

This story was told to Michael Fraiman by John Streicker, the Yukon’s minister of energy, mines and resources. In July, Streicker posted a much-watched video in which he used himself as a depth gauge to show rising water levels in the Southern Lakes region.