Sea otters are back with a worrying vengeance in B.C.

Once within a whisker of extinction, the adorable creatures are making a major resurgence—but not all residents view their comeback in a favourable light 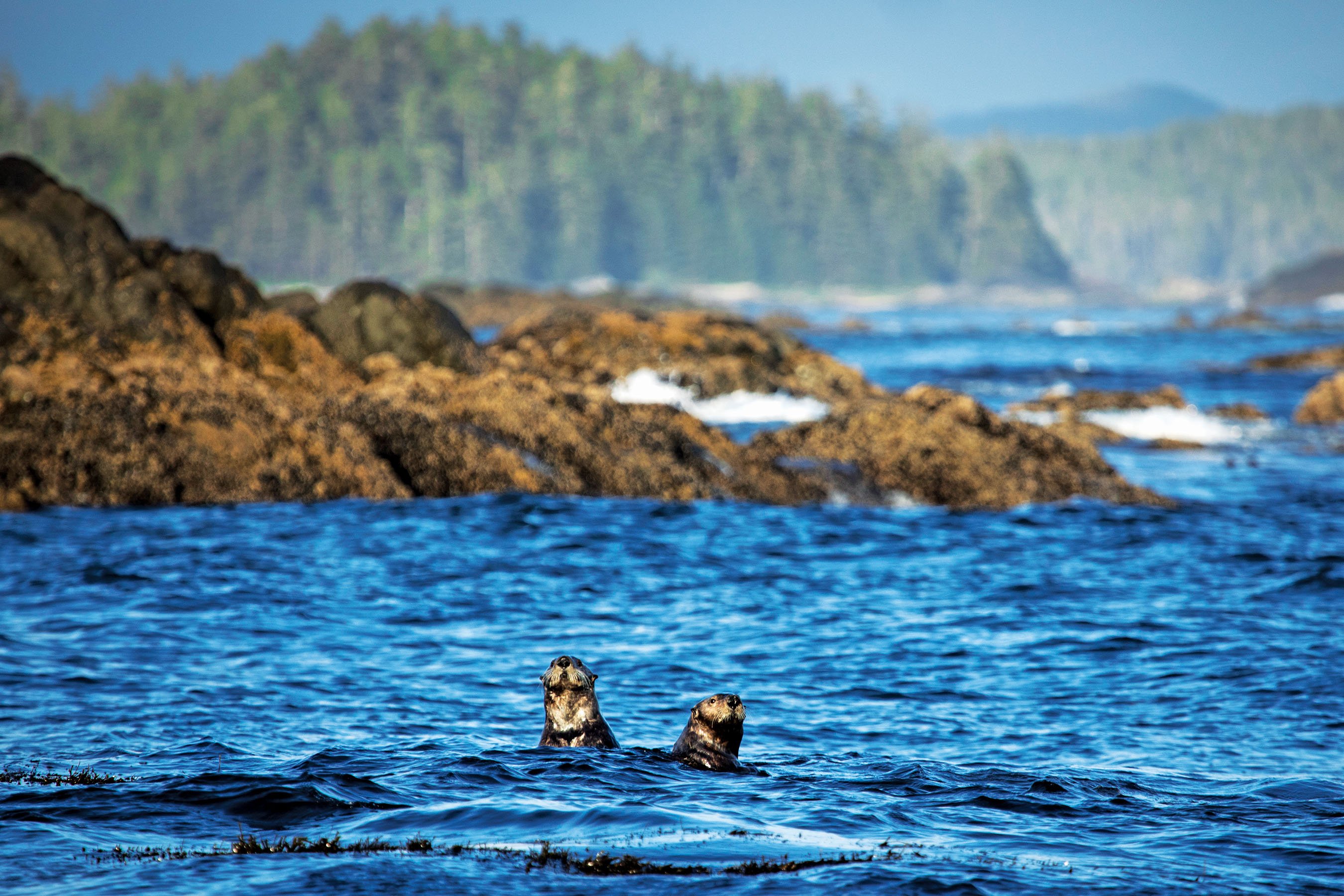 Sea otters off Vargas Island in B.C.; the animals eat 20 per cent of their body weight each day (Photograph by Melissa Renwick)

From the stern of a skiff speeding away from Vancouver Island, Joe Martin trains a steely gaze on the scattered islets just west of Tofino. With the summer sun due to set in about an hour, he says, nearby sea otters are likely out foraging. A wildlife guide in the area for more than 30 years, he knows where the slippery critters like to cavort, and quickly spots one a couple kilometres south of Vargas Island, bobbing in choppy waters, and blending with the mess of kelp sweeping the surface.

Wary of the intrusion, the otter keeps a safe distance of about 30 m, giving the skiff double and triple takes before disappearing into the deep. It’s not long, however, before several more otters surface and surround the vessel. Some pop from the water like prairie dogs, inspecting the boat from a few different angles. Others are less guarded, and treat their guests to a water-borne wrestling show instead.

With adorable faces and a penchant for lounging face-up on the water—sometimes with a pup or a buffet of shellfish on their bellies—the furry marine mammals look the picture of easy living. The past decade has seen their numbers soar along the B.C. coastline, in a back-from-the-brink recovery some hail as a conservation success story, but others—especially West Coast First Nations—believe is already upsetting the balance of local ecosystems. The comeback took 50 years, and no small amount of human intervention.

Before that, to put it mildly, the actions of humans had not been kind to these creatures. Prior to the Maritime fur trade of the 18th and 19th centuries, an estimated 150,000 to 300,000 sea otters lived along the Pacific Rim, ranging from northern Japan to the Baja peninsula. Sought out for their soft, rich pelts that can carry up to one million hairs per square inch, they were hunted to the edge of extinction by 1911, when their worldwide numbers fell to fewer than 2,000. The last otters seen in B.C. for decades were reportedly shot off the west coast of Vancouver Island between 1929 and 1930.

The reintroduction to B.C. took place between 1969 and 1972, when the Canadian and U.S. governments moved 89 otters from Alaska to Checleset Bay, on the island’s northwest coast. It was near there, in the early ’80s, that Martin first laid eyes on one. “And then,” he says, “they just multiplied like crazy.”

Designated an endangered species in Canada in 1978, and later downgraded to a species of special concern in 2007, sea otters have since thrived thanks to protection efforts and an ecological shift that’s converted their romping grounds into a highly hospitable habitat. As of 2017, Fisheries and Oceans Canada estimated B.C.’s otter population at more than 8,000, reoccupying somewhere between a quarter to a third of their historic range in the province.

Many ecologists are quick to praise the so-called “rewilding” effort, as the otters have begun altering their ecosystem closer to an unexploited state. But life on the coast has also changed since the otters’ absence, and not all residents view their comeback in a favourable light.

Edward Gregr, a marine biologist with the University of British Columbia, recently studied some of the costs and benefits connected to the recovery. On one hand, he says, the animals come with considerable economic advantages: the predicted boost in eco-tourism alone is pegged at $42 million per year.

But sea otters are more than just cuddly-looking critters. They’re also voracious predators and, more specifically, what ecologists call a “keystone species.” Like the central stone that locks an arch, they play a pivotal role in their environment—so pivotal that their absence or presence can trigger dramatic changes.

In the years before the reintroduction, Gregr explains, sea urchins, clams, crab and abalone—the marine mammal’s preferred prey—prospered, supporting shellfish fisheries and coastal communities that found opportunity in more abundant and accessible catches. Without otters to keep them in check, sea urchins in particular, with a healthy appetite for flora, were free to mow down large swaths of kelp forests that once flourished. “We ended up with what we call urchin barrens,” Gregr says, “places that are basically devoid of plant life and are covered in urchins because they eat any kelps that happen to grow up.”

While ideal for fisheries, the urchin gluts also offered a boon to the recovering, and ravenous, otters. Carrying little fat beneath those dense, fur coats, the animals need to consume more than 20 per cent of their body weight each day to stay warm in the water, which makes them a competitive threat to commercial fisheries harvesting urchin or other shellfish. According to the study, recovering otters, and their appetites, could cost these fisheries more than $7 million per year.

“These commercial fisheries may not be possible, or they may have to change in the presence of sea otters,” says Gregr. “Urchins aren’t gone from the system, but they’ve gone back to hiding in crevices, which makes them smaller and harder to access.”

Recovering kelp forests, on the other hand, are projected to offset the loss with benefits such as carbon sequestration, estimated at $2.2 million annually. The seaweeds also invite more diverse marine life, including commercial fin fish, worth nearly $10 billion per year. These include everything from lingcod and rockfish to kelp crabs and smaller invertebrates that feed other parts of the ecosystem.

Based on these variables, the study concludes that the transformations triggered by otter recovery offer a net benefit. Trouble is, these benefits are likely distributed inequitably, and communities that lack the resources to adapt may feel the losses more acutely. Where larger, commercial fisheries might shift to deeper waters, fishers that keep closer to shore, including those in some Indigenous communities, may be restricted.

Martin, who’s also a councillor with the Tla-o-qui-aht First Nation, says he’s met with several members of nearby Indigenous communities who see the otters as a threat to their food security. Not long after the animals were reintroduced, he recalls, he began hearing complaints from residents of Kyuquot, a First Nation community down the coast from Checleset Bay.

“Those people up there were very upset about having [the otters] around because they’re eating everything up,” he says. “Those kinds of things have certainly affected many of the communities that are very isolated, and that do not have direct access to the Co-op grocery store, if you will.”

These concerns are captured in Coastal Voices, an online library featuring scientists, Indigenous leaders and Elders who discuss the effects of the otters’ return to their territories. Anne Salomon, a marine ecologist at Simon Fraser University who leads the project, points to an underlying theme in the testimonies: when the otters were brought to the island, it was done without the consent of these communities.

“Indigenous people are feeling like they have very little control over a predator that’s directly, and very quickly, reducing the numbers and size of many of the shellfish that are a major source of food,” she says. “If your arms are tied, you would feel that way. If you could do something about it, you might feel differently.” 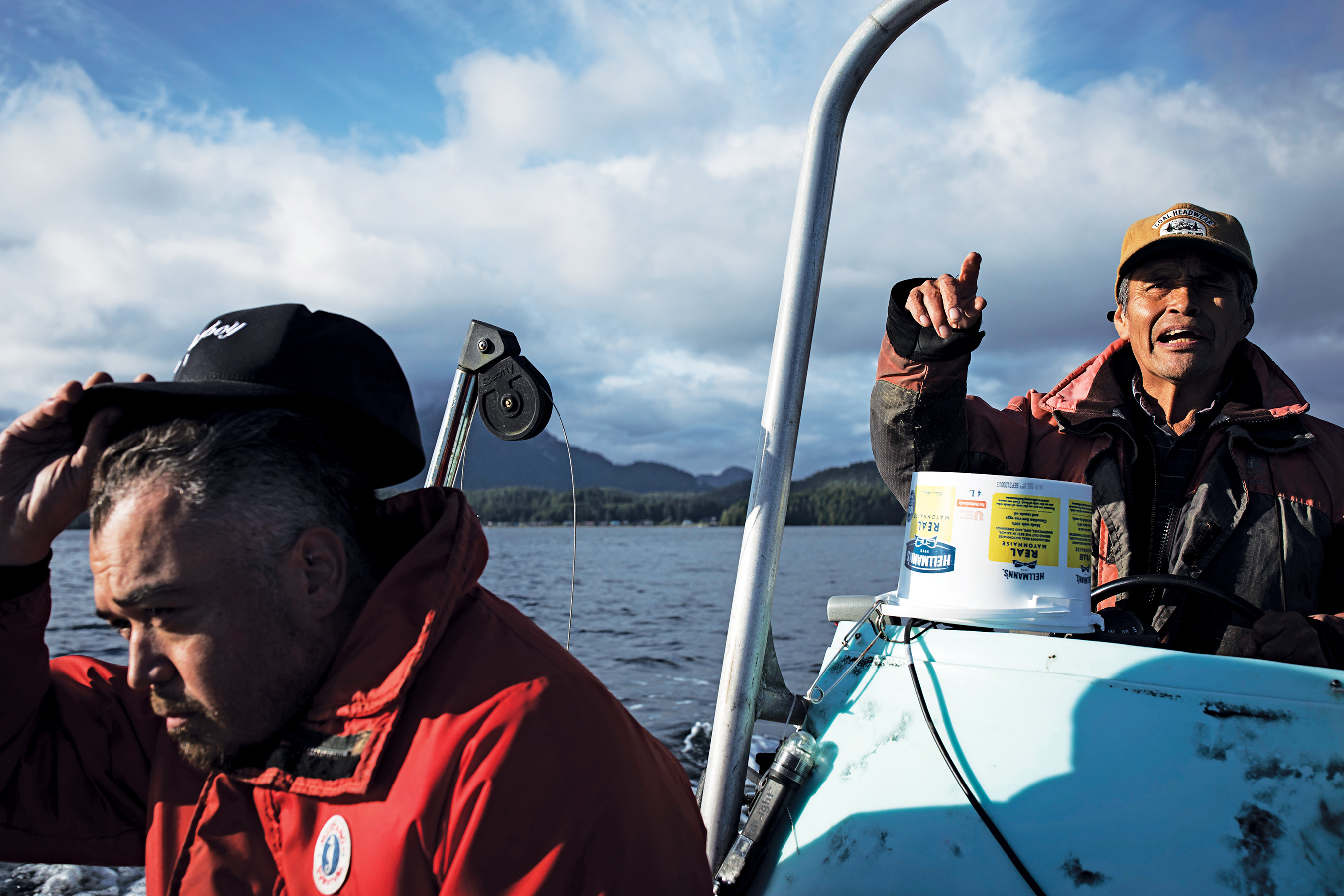 Martin (right) and friend Edward R. Johnson on the lookout for otters in the Tofino harbour (Photograph by Melissa Renwick)

Allowing affected communities to control the animal might offer some redress. But the otters currently enjoy protection from harm and harassment under federal and provincial laws, although Indigenous groups can apply to hunt a limited number for food, social and ceremonial purposes.

In 2014, a workshop at the Hakai Institute, a research institution on the central coast, brought many of these people together with the goal of reimagining the relationship between humans and sea otters. Several participants highlighted an apparent oversight with the recovery effort: before the animals were exploited for their fur, human hunters acted as a kind of control on their populations, helping coastal communities strike a balance with them; without a mechanism to keep the species in check, that balance is gone.

Barbara Wilson, a cultural adviser on the project and Skidegate councillor with the Haida Nation, echoed the observation. Traditionally, she says, hereditary leaders in nearly all of the affected nations acted as ultimate rights holders, responsible for managing resources such as the seafood, and factors that might threaten that supply. “If it was up to me, I would have the old way of doing things, and keep [the otters] out of certain areas so that people would still be able to have food security,” Wilson says. The laws as currently written, she adds, overlook “how crippling it is to not be able to do anything.”

That’s not to say that some locals aren’t taking matters into their own hands. Having spoken with members of these communities, Salomon says that some hunt the otters regardless of the protections, exercising what they say are Indigenous rights and responsibilities—a prerogative that Martin claims himself. “People may say it’s breaking the law, but whose law is it?” he asks. “We don’t have a treaty with anyone.”

Looking to the past, however, could offer a blueprint to a more equitable ecosystem. Archaeological records and traditional knowledge, Salomon notes, show that Indigenous communities coexisted with otters for thousands of years, safeguarding their food and managing the mammals through hunting, but without the near-extirpation seen during the fur trade.

What’s more, far from dominating their historic range, she adds, otters were likely distributed in patches along the coast, separated from shellfish beds and the human settlements that relied on them. A coastline that looks more like it did in the past, Salomon concludes, “could be a solution for how we manage these tricky trade-offs in the future.”

This article appears in print in the October 2020 issue of Maclean’s magazine with the headline, “Otter, otter everywhere.” Subscribe to the monthly print magazine here.