The tale of Toronto's boardwalk foxes

Stories of wildlife spreading out into human spaces were common during the unprecedented global coronavirus lockdown. Here's what happens when the humans come back. 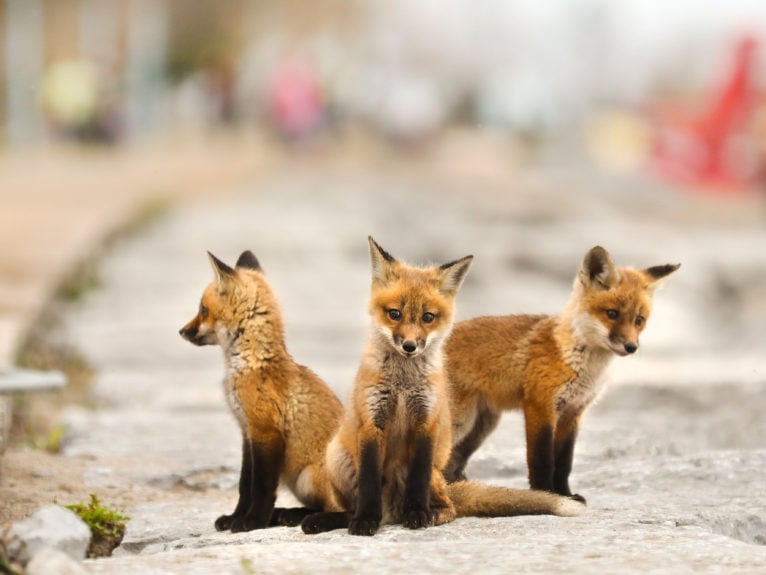 A few of the young kits at Woodbine Beach in Toronto; when passersby began taking selfies with the animals, a local wildlife centre intervened (Richard Lautens/Toronto Star/Getty Images)

About a month into one of the most collectively depressing periods in decades, a reddish-orange bright spot appeared amid the misery of Toronto’s lockdown. A family of red foxes—two parents and, by most counts, seven kits—had made their den in an unexpected place: beneath the quieter-than-usual boardwalk at Woodbine Beach on the shores of Lake Ontario.

There have been more than the usual number of reports of foxes denning in busy areas this year, says Nathalie Karvonen, executive director of the Toronto Wildlife Centre, “but this one takes the cake.” When the local animal protection organization heard passersby were going so far as to shove their hands into the den, and even hold baby foxes to take selfies, they decided to take action.

With the city’s blessing, nearly 60 volunteers took shifts walking the area, asking people to keep away from the foxes’ home. They also used so-called “aversive conditioning” (stomping their feet or making noises when the babies ventured out of the den during the day) to help the foxes develop a healthy fear of humans and their canine companions. Despite their efforts, a baby fox was found dead in mid-May, likely killed by a dog. By then, the volunteers had endured some hostility and verbal abuse from people keen to see the foxes, and even threats of violence. In June, two weeks earlier than planned, the organization shut down the protection program.

READ: Oh, how we’ve changed. Coronavirus ups and downs by the numbers

Stories of wildlife spreading out into human spaces were common during an unprecedented global lockdown, the foxes being just one example. But what they—and their protectors—endured is an example of what happens when people come back after weeks of being shut in. And, usually, it doesn’t end well for the animals.

While foxes have inhabited the lakeshore area for a long time, city officials say they rarely den under the boardwalk. A confluence of factors likely drew them: February and March were cold and miserable, leaving the walk mostly empty; the boardwalk is built on top of an older one, leaving an alluring space between the two; and the peace and quiet brought on by the lockdown might have caused the animals to stay longer than they would otherwise have. Above all, the foxes may have found it hard to forego the vast numbers of mice—an attractive food source—that live under that part of the boardwalk, says Karvonen.

But as the weather improved and the public realized the outdoors was their only safe escape from their homes, the boardwalk filled and the foxes became adorable celebrities. Joanne Ingrassia, a volunteer who often worked the 5:30—9:30 a.m. shift, recalls dealing with at least half a dozen mostly amateur photographers who would crowd around the den every morning (dawn and dusk are when the foxes were most active), some shining lights into the animals’ faces or pursuing the adults as they headed out to hunt.

During the day, the volunteers would try to educate people, urging them not to feed the animals, to give the den a wide berth, to leash dogs, to keep moving so the baby foxes wouldn’t grow accustomed to them. Many listened; a few did not. “Some people were very rude and told them to basically eff off, go to hell,” says Karvonen. “They just simply did not want to be told what to do.” Passersby weren’t even above squaring off with each other. A video from early May captures an argument about the foxes between a man and a woman with a dog that ends with her fake-coughing on him, as if to give him COVID-19.

The wildlife group’s altruism came to end over concerns for the volunteers’ safety. One man told a young volunteer that he would stab her if he had a knife. Another volunteer faced a different man who did come at him with a knife. “That, unfortunately, is just one of the perils of life in the big city,” says Karvonen. “You’re going to have quite a mix of people, including people who probably need help [themselves.]” 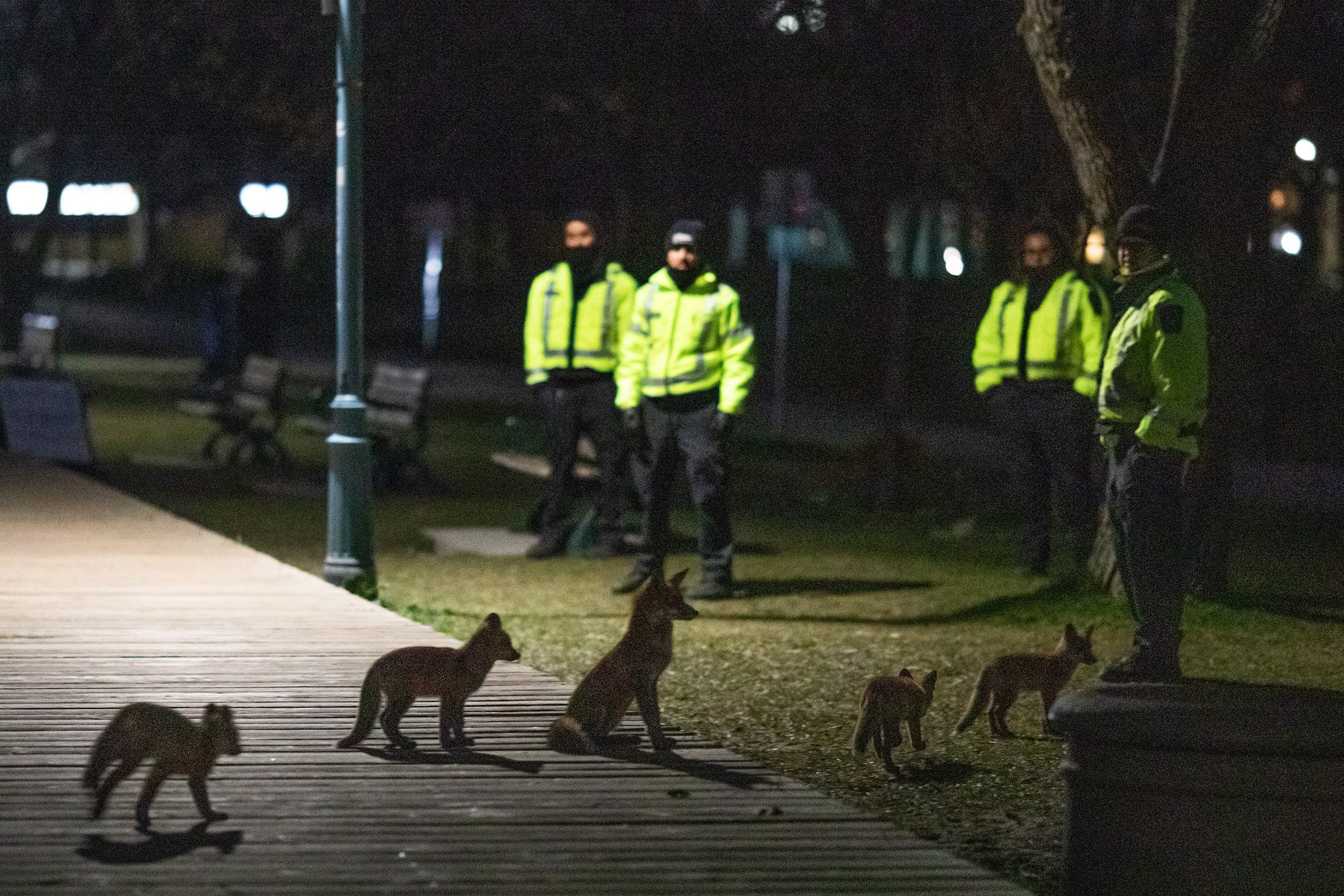 The intense fascination with the foxes is a logical outcome of city living, says Darcy Ingram, a historian at Selkirk College in B.C., who studies animal-human relationships. The more urban an area, the less opportunity to encounter wildlife, he says, which makes every instance a source of wonder. Combine that with restlessness brought on by the lockdown, plus the power of social media, and the foxes were sure to become a veritable tourist attraction. (Ingrassia met people who’d come in from the suburbs just to see them.)

Cities have a rhythm to them—quiet mornings, periods of traffic—and so do the animals that live in them, says Ingram. Those rhythms changed when the coronavirus hit, he adds, and humans didn’t have to retreat far for the animals to seize their opportunity: “What the foxes under the boardwalk reveal is the degree to which these are shared spaces. We just may not share them at the same time.”

If the pandemic changes the way people live—forcing them to work from home and spend more time in their neighbourhoods—they could expect some changes from animals, too. “It gives me great hope,” says Ingram, “that they are such resilient creatures in the midst of heavy urban conditions.”

But the boardwalk foxes are now a scarce sight, and Ingrassia, who lives in the area, thinks they’ve probably moved on. The efforts of the volunteers likely did not forestall the damage done by human contact during the kits’ early days, laments Karvonen, who is talking with the city about ways to prevent foxes from denning there again. “If this fox family comes right back next year,” she says, “I believe I will cry.”

This article appears in print in the August 2020 issue of Maclean’s magazine with the headline, “Don’t tread on the foxes.” Subscribe to the monthly print magazine here.