Ts’eketi, the 100-year-old B.C. sturgeon that's here to save her species

Deep in British Columbia's Nechako River, the eggs of one ancient mama fish might be among the last hope for these endangered sturgeon 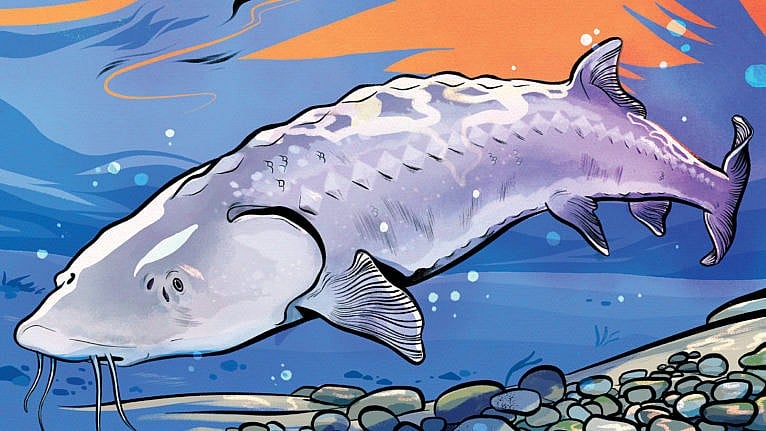 The morning of April 30 dawned chilly and drizzly along the Nechako River in the middle of British Columbia. It was the kind of day when a sleep-in feels like self-care.

But Jordan Cranmer was up early, working her way along the river in an aluminum boat. Shivering against the wind, she leaned over the bow to draw up a setline of nylon rope extending to the river’s bottom. Cold seeped through her rubber gloves as she inched the boat along the rope. Cranmer, an outreach and junior research technician at the Nechako White Sturgeon Conservation Centre, kept alert for movement that might indicate life on the line. The rope held taut, as though it was caught on something on the riverbed.

Cranmer bent closer to investigate. And then: “It was just a ‘holy crap’ moment,” she remembers.

The glistening purple-grey back of a Nechako white sturgeon—with its dramatic five rows of pointy, diamond-shaped scales—breached the water in front of her. Cranmer looked wide-eyed at her colleague Fraser Linza, a senior fish culturist who was driving the boat. “You just felt this historic moment,” she says.

Genetically unique from other sturgeon, the Nechako white lives in the waters upstream of the confluence of the Nechako and Fraser rivers at Prince George. Conservationists say the fish hasn’t changed much since before the time of the dinosaurs, but its numbers have dwindled alarmingly over the last 50 years. In 2006, the Nechako white was designated endangered under the Federal Species at Risk Act.

These sturgeon are dying off at a young age in what biologists call “juvenile failure.” For many, their lives end before they have the opportunity to spawn and replenish the population. The Nechako sturgeon reach spawning age at a relatively late 20-25 years for males and as late as 40 years for females.

It’s unclear exactly why this is happening, but conservationists believe juvenile failure is related to changes in water flow. The Nechako was dammed for power generation nearly 70 years ago, altering the amount of water and timing of flows in the river. These changes affect water temperature, sediment, food sources and perhaps predators like otters and minnows that feed on sturgeon eggs.

The team at the Nechako White Sturgeon Recovery Initiative, which runs the conservation centre, developed a sturgeon breeding program they hope will rebuild and maintain the population until the cause of the decline is identified and fixed.

On this chilly morning, Cranmer and Linza knew instantly that they were looking at an extraordinary fish. She is the largest Nechako white sturgeon on record, fully 2.9 metres in length. At 152.3 kilograms, she outweighs the previous record-holder by eight kilograms, a mark that stood for nearly 15 years, and the team estimates she’s about 100 years old.

A mark on her scales indicated she’d been captured once before, and the centre’s database showed that, in 2011, she weighed 40 kilograms less and measured a half-metre shorter. She’d been tracked via transponder, travelling a 50-kilometre stretch of the river before the device failed in 2018.

Cranmer and colleagues pushed an autoscope, a device similar to the one a doctor uses to check a person’s ears, into a small incision in the sturgeon. They found that she was heavy with eggs, each measuring around 3.5 millimetres—an indication she was ready to spawn.

After placing the fish on a stretcher and wrapping her in beach towels to keep her comfortable, the team brought her back to the hatchery in the nearby town of Vanderhoof.

Cranmer hopes the sturgeon will produce healthy hatchlings that will be strong enough to survive for decades and eventually produce their own robust progeny. “We want offspring that thrive the way that she does,” says Cranmer. “That has a huge impact on the population as a whole.”

Before the fish was released back to the wild, the conservation centre held a naming contest for her. The winning entry came from Michelle Walsh, a fisheries biologist who grew up fishing the Nechako. A member of the Nadleh Whut’en band, whose territory is located in the Nechako region, Walsh suggested Ts’eketi (pronounced TSE-keh-tee), which in the dialect of the Nadleh Whut’en means “very respected female elder.”

“She is an elder because she survived so long,” says Walsh, “and to do that in such arduous conditions, I think we need to respect that.”

MORE: P.E.I. lobster fishers risk it all just to leave their harbour. And they’re fed up.

If endangered fish like Ts’eketi are going to be protected, humans need to honour their home, Walsh believes. She would like First Nations in the region to have a greater role in the management and development of the policies that affect the river. “The communities that have been caretakers of the river and watersheds for thousands of years, they need to be given equal, if not greater, say on how their flows are managed and for what purpose,” she says.

Ts’eketi’s eggs will be raised for a year at the hatchery. Next spring, as soon as the ice melts, her offspring will be released with other juvenile sturgeon into the Nechako. There, they’ll likely cross paths with their century-old mother, plying the murky depths as her ancestors have done for millions of years.

This article appears in print in the October 2021 issue of Maclean’s magazine with the headline, “Ahead by a century.” Subscribe to the monthly print magazine here.