What does it take to move a rotting whale carcass? Glute strength and Vicks VapoRub.

There is no creature more majestic than a blue whale, and few jobs less pleasant than getting rid of a deceased one that washed up on your public beach 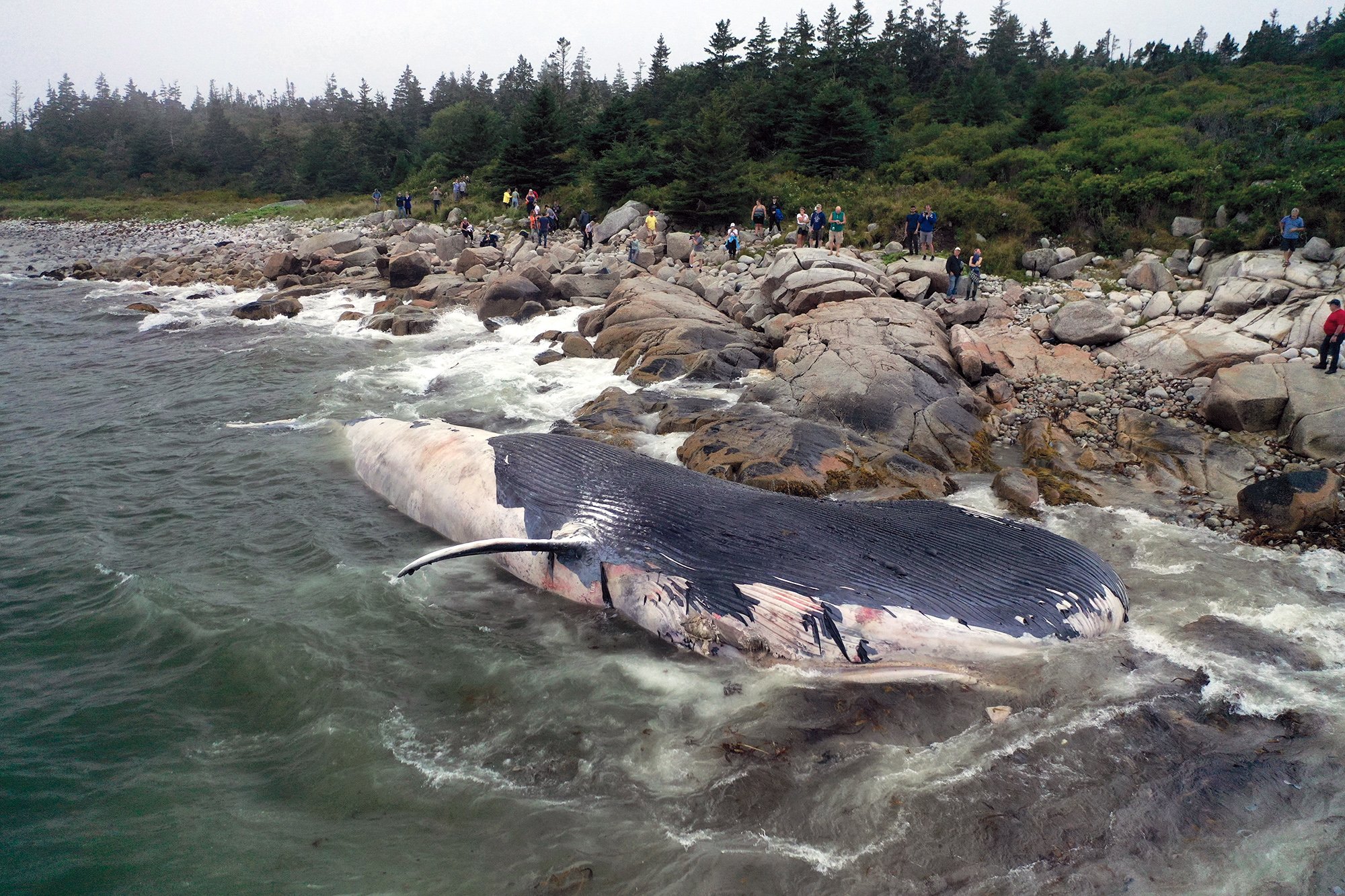 It looked at first glance to be a large metal object floating in the Atlantic just south of Halifax harbour—a potential navigation hazard that a caller reported to the Coast Guard just before 9 p.m. on Sept. 8.

But when the Coast Guard icebreaker Sir William Alexander, which had been patrolling nearby waters, steamed over to check it out, the crew quickly identified it as a dead blue whale, its upturned body forming a gargantuan ribbed balloon that protruded from the water.

Around this time, Hurricane Larry was barrelling toward Atlantic Canada, carrying winds of nearly 130 km per hour and pushing large swells. Eventually, the tempest washed the whale against the rocky coastline of a popular provincial park, and for hours the surf pounded its 25-m-long body, which by now was deflated and gelatinous, not unlike a waterbed mattress.

Word of the dead cetacean’s arrival spread fast. People flocked to Crystal Crescent Beach Provincial Park to see the largest creature to inhabit the planet, up close and in the flesh.

Except the flesh had been decomposing for a while. You could smell it from the parking lot: an acrid, cilia-singeing odour that caused onlookers to gag or hold their noses. Something had to be done.

The task of removal fell to park officials, who hatched a plan with help from Fisheries and Oceans Canada and the Marine Animal Response Society (MARS), a non-profit that responds to dead or distressed animals in the Maritime provinces. The society, which had taken apart a blue whale in 2017 near Liverpool, N.S., also agreed to extract the creature’s bones for a company that prepares animal skeletons for museums.

MORE: A B.C. mountain goat was the unlikely champion in a match against a grizzly

It was impossible to get a land vehicle to the rugged stretch of coast where the whale had washed up. The only option was to tow the whale off the rocks.

It was high tide around noon on Sept. 14 when a tugboat crew handed off a tow rope capable of pulling 89,000 kg to provincial staff in a Boston Whaler bobbing in the waves just off the park. The crew in the Whaler threw the tow rope to colleagues waiting on the rocks, who, in turn, tied a smaller rope around the whale’s flukes and connected it to the tow line using a heavy steel shackle. “Good to pull!” radioed a staffer to the crew on the tug, and with a yank, the whale slid off the rocks and into the water. Volunteers and staff cheered and high-fived.

From there, the carcass was towed to the white sands of the public beach, about a kilometre away. An excavator dragged it onto the beach and up an old access road.

The next morning, the gruesome work of disposal began. The whale, a female, was too decomposed to conduct a necropsy to determine the cause of death. But it’s a safe bet she didn’t die of natural causes. She was young, only nearing the age of maturity (between five and 15 years old). And the biggest threats to blue whales, according to the U.S. National Oceanic and Atmospheric Administration, are fishing gear entanglements, ocean noise and vessel strikes.

RELATED: A feel-good moment for the Nova Scotia lobster fishery

Warren Pinder, a MARS volunteer, wore a pair of swim trunks, a suit made of protective Tyvek material, hip waders, gloves and protective eyewear. When he cut into the whale, liquid splattered back. “The rule of thumb is ‘Keep your mouth closed,’” Pinder says.

A crew of 10 started on the ground around the whale’s tail, slicing mattress-sized slabs of blubber with small machetes and knives. The excavator dug in too, depositing the slabs and organic debris into the back of a dump truck. So tough were the whale’s tendons and muscles that the blades of the cutters’ knives dulled every 10 to 15 minutes. A team of sharpeners worked alongside all day.

The team also took samples of the whale’s blue-grey skin, blubber and baleen, as well as an eyeball the size of a large grapefruit, for research, to learn more about the endangered species.

It was slippery, smelly work done amid swarming mosquitoes and flies. At times, a cutter would get a foot, a leg or even their lower body stuck. Colleagues would put their knives away and assist. “It was like pulling someone out of quicksand,” says Pinder. 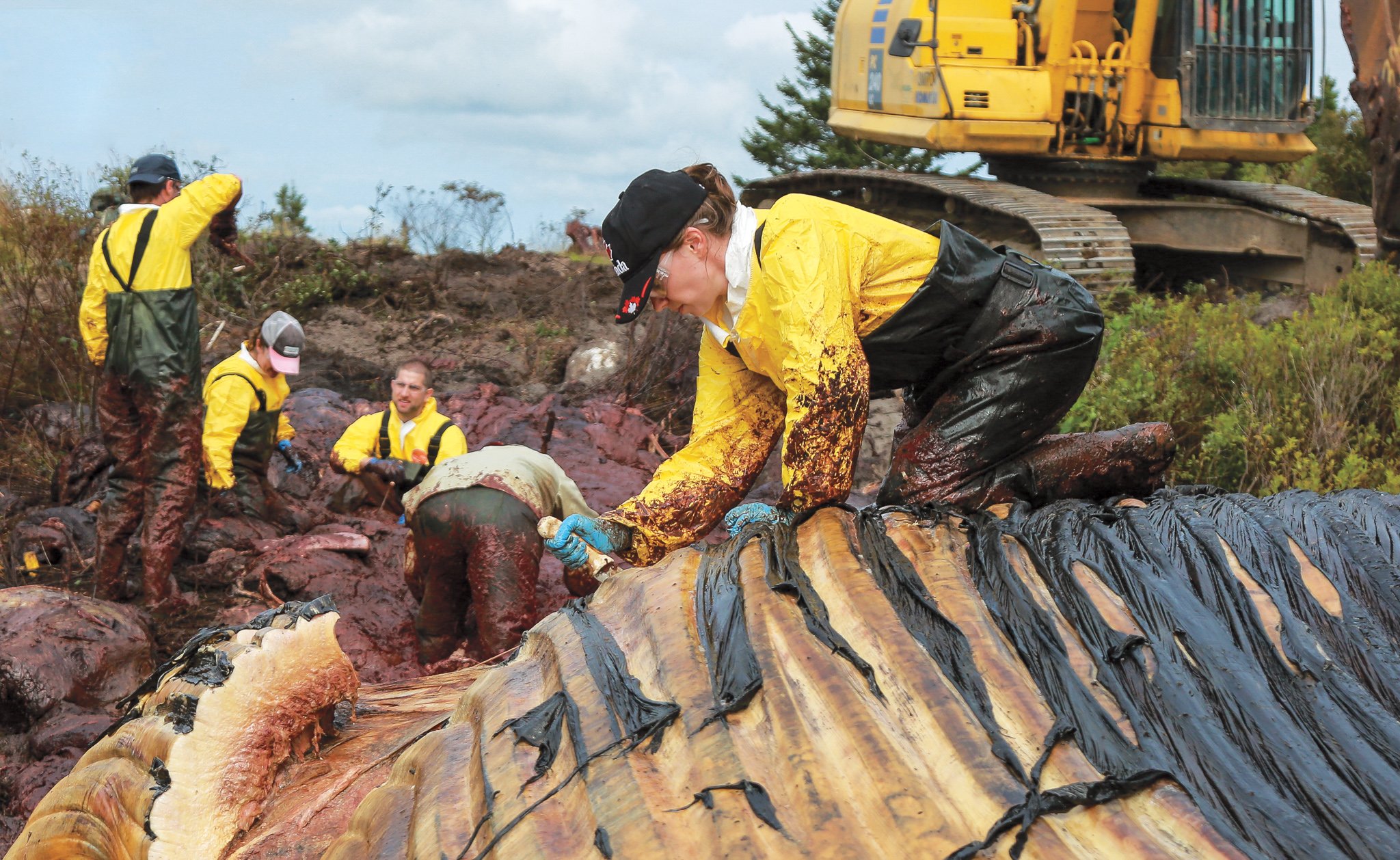 Wresting out the whale’s skull, which was longer than a pickup truck, and extricating the rib bones counted among the most gruelling tasks. The heart, which weighed about the same as a dairy cow, was so large that crew members had to climb it to start cutting it free. “Just trying to manoeuvre yourself in the muck of the whale is a full-body workout,” says Pinder, who worked on the whale for 20 hours over two days. “Your glutes are sore. Your quads are sore, and your shoulders, and even your hand that’s trying to grip the knife.”

As the crew toiled on, the smells grew stronger. Some workers tried to block them by smearing globs of Vicks VapoRub under their noses. Dump trucks carried more than eight loads of waste to an undisclosed burial site, leaving behind only the bones inside two cream-coloured shipping containers.

MORE: ‘Sealioning’ is the word that sums up why Twitter discussion is so unbearable

Over the next two years, Research Casting International, a company that creates cast skeletons for public exhibits, will cover the bones in cow manure so bacteria can strip them, then degrease them with detergents. This specialized work is done at the firm’s hangar-like facility in Trenton, Ont.—1,600 km from the waters where the whale once dove and cruised and chatted with her peers. Owner Peter May, whose firm has prepared blue whale skeletons for the British Museum, the Royal Ontario Museum and Memorial University, predicts the Nova Scotia whale “will make a museum proud one day.” But he laments the death of a magnificent creature: “It’s sad,” he says. “It’s always sad.”

This article appears in print in the December 2021 issue of Maclean’s magazine with the headline, “Moving day.” Subscribe to the monthly print magazine here.