Why scientists won't guess what's next for Arctic sea ice

Arctic sea-ice melt has led to collapsed hillsides that morph into rivers of mud, and displaced animals in strange places. Can anyone predict what’s next? 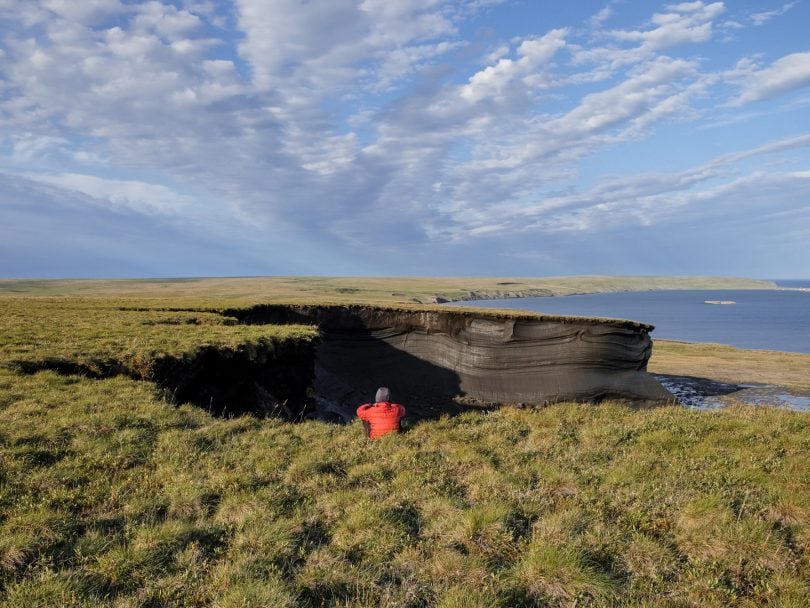 There’s something otherworldly happening in Canada’s Arctic as the warming climate burns forests, disrupts animal migration and makes sea ice disappear. “The ground is moving,” says Paul Overduin, a senior scientist at Germany’s Alfred Wegener Institute for polar and marine research, describing a recent trip to Yukon. “The permafrost is thawing out to a degree where the ground just becomes more mobile, and you see complete valleys on the move, and mudslides, and what look like craters appearing on the surface of the earth.”

The most famous of those craters—which are called thermokarst depressions—is the Batagaika “megaslump” in Siberia, known locally as the “doorway to the underworld.” The crater was 800 metres wide and 86 metres deep in 2017, and expands to the south and west at a pace of 10 metres a year. On his summertime trip down the Mackenzie River, Overduin observed thaw slumps—collapsed hillsides that morph into rivers of mud—“happening all over the place.”

It sounds like a scene out of a sci-fi flick about the end of the world and it’d sure be nice if scientists could spare us the suspense and explain what happens next. But for all the millions of dollars spent studying climate impacts on the Arctic and the thousands of scientists who’ve observed the changes up close, many researchers aren’t willing to make predictions.

“Most of the things we see and observe in the landscape point to an intensification,” says Overduin. That means more wildfires above the Arctic circle, and perhaps more animals in strange places—Overduin wouldn’t be surprised if an animal were spotted hundreds of kilometres away from its typical habitat. But he won’t predict that, nor will he guess what’s next for sea ice—a flashpoint in climate change conversations.

“Sea-ice reduction basically hit like a bomb in 2007. Nobody saw it coming,” says Overduin. “We put millions of dollars a year into modelling the climate. None of the models predicted it. So I feel like we should have a little more humility about making predictions.”

The U.S.-based National Snow and Ice Data Center’s visualizations of Arctic sea ice explain Overduin’s reticence. The amount of ocean covered with ice is trending down overall, but varies wildly year to year. The all-time low came in 2012, when the minimum total area covered by sea ice sank to 3.39 million sq. km. Two years later, the mid-September low cracked 5 million sq. km. This year marked the second-lowest level on record at 4.15 million sq. km. “Predictions have the Arctic being basically sea-ice free during summer by 2050, and some even expect this could happen as early as 2030,” reads a statement from Fisheries and Oceans Canada, adding that the ice bridge between Canada and Greenland is “now breaking up earlier or even failing to form”—which results in the ice being “very unpredictable.”

RELATED: The plan to save Canada’s rapidly-melting Arctic ice

On the edge of that ocean of uncertainty, in what are technically Canadian waters, lies a rigid, convulsing field of ice known as Tuvaijuittuq, an Inuktitut word that translates to “the place where the ice never melts.” WWF-Canada calls it the Last Ice Area, and Ottawa is moving to preserve it by banning any human activity. Humfrey Melling, a senior scientist at Fisheries and Oceans Canada who has spent nearly four decades measuring ice in the High Arctic, says Tuvaijuittuq is home to the “strongest ice in the world.” That stubborn, unmeltable ice is a consequence of wind and ocean currents that create a pinch point at the top of the world where ice folds, ripples and thickens to great depths.

Melling, for his part, makes one guarantee: Tuvaijuittuq’s ice won’t melt in 2020. But it’s the exception that proves the rule. Panicked southerners will likely watch more dramatic footage of melting glaciers. And no matter how much time researchers spend in the volatile North, what they learn will only be the tip of the iceberg.

This article appears in print in the January 2020 issue of Maclean’s magazine with the headline, “Ice unknown.” Order a copy of the Year Ahead special issue here. Subscribe to the monthly print magazine here.