She was an even-keeled, relaxed ‘country girl’ who knew her mind, loved her sons and rarely got a night out 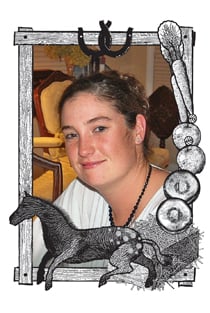 Erin Katherine Vance was born on Sept. 19, 1986, in Ottawa, but lived most of her life just west of there, in the Ottawa Valley farming village of Dunrobin. There, and along the green corridor of the Ottawa River—Ontario south of it, the silver steeples of Quebec just north—the Vances were long known as important farmers and cattlemen. Erin and her older brother Alex grew up amid hay, horses, and the rich, twangy Irish-, Scottish- and French-inflected English of the valley. Her father, Don Vance, runs a garage; her mother Janet does finance work for the city of Ottawa. Erin, with her dark curly hair and round face, was, as a girl, “always ebullient, always a happy spirit,” says her maternal aunt Wendy Doyle. Yet she loved order, finding satisfaction in rules and routine. “She was an organized girl,” says Janet. “She’d take all the clothes from the linen closet, and all the towels, and fold them up and put them back again.”

It was Doyle, an accomplished rider, who introduced her to horses. “From the beginning she just wanted to give them lots of apples and carrots,” she says. “Every time I’d ask would she like to go riding, she’d just beam, ‘Oh yes.’ ” She began lessons early, at eight. “I had a hard time finding someone who’d take her,” Janet says. “But she started then and never stopped.” She was equally diligent at St. Isidore Catholic School—“actually a very good student until Grade 9, when she discovered boys,” Janet says. And she was a ferocious worker, mucking out stables at 14 and becoming a floorwalker at the Zellers in Hazeldean Mall—“like an undercover security guard,” Doyle says. Now and then she’d spot a shoplifter. “She’d chase them out,” says Janet. “It was very exciting for her.” These thrills led Erin to consider a career in policing. “It was a good path for her,” Doyle says. “She didn’t like it when people didn’t follow the rules.”

Erin was in the policing program at Algonquin College when she learned she was pregnant with twins. She was 19. If she was otherwise even-keeled, relaxed—“a country girl,” says her uncle Dale Vance—here she knew her mind; her family had no choice but to adjust. She would be a single mom. “She was an independent girl,” says Dale. “And she was very private in her private life. We were apprehensive, but she stood her ground with us. Like, this was the way it was going to be—‘I am going to raise these children.’ ” Liam and Caleb, two handsome, identical boys, arrived on Aug. 23, 2006. “She didn’t pass it off,” says Dale. “She stood up, and became this awesome mother.”

Forced to put off policing, she instead found a job at a stable managing 30 horses. She was a determined worker. “She threw bales of hay around like they were feathers,” says Doyle (exertions that allowed her to safely indulge a doughnut habit). Her duties grew commensurate to her skills. She bought an investment horse, an unusually relaxed thoroughbred she named Hit the Snooze, that she trained with enormous care, joking he was “the boys’ college fund,” says friend Carrie Munro. “She had what the horses needed,” says her boss, Beth Ross. “The rhythm and the routine. She was soft—soft, but firm.”

This was how her sons knew her too—firm but loving, ever-present, guiding them through craft-making sessions, taking them swimming and skating. Though she and the boys lived with her parents, she rarely had time for herself. “She didn’t date much—I guess in the last few months she’d met a nice guy,” says Doyle. “I’d never met him,” says Dale. “She didn’t want anyone involved with her boys unless—well, she was careful. But she’d started talking about him. And he was a twin too. An identical twin.” “She was trying to find the right guy,” says Munro. “I think she might have found him.”

On St. Patrick’s Day Erin enjoyed a rare night out: with that new beau, Justin Hammond, she and some friends gathered at the Point, a tiny riverside pub in the village of Constance Bay. Around 2:30 a.m. a group of them left, on foot because they’d been drinking, for home. A blue Subaru tore down the narrow road, and hit Erin. “I tried to push her out of the way,” Hammond told the Ottawa Citizen. “I didn’t push her far enough.” The driver left the scene on foot. Charged in the hit-and-run death is Jeremy Rees, a 23-year-old man whom Erin knew in passing and who’d been at the Point drinking alongside her. Next Saturday, a dinner event in nearby Carp will help raise money for the Erin Vance Memorial Fund, established to assist Don and Janet, Erin’s parents, in bringing up her beloved twins. It will be a dry affair.