Falling in love on the Canada-U.S. border

Lynt Harris was in Surrey, B.C., and Julie Arps was in Ferndale, Wash. They met online while the border was closed, having to find an international loophole just to hold hands and hug. 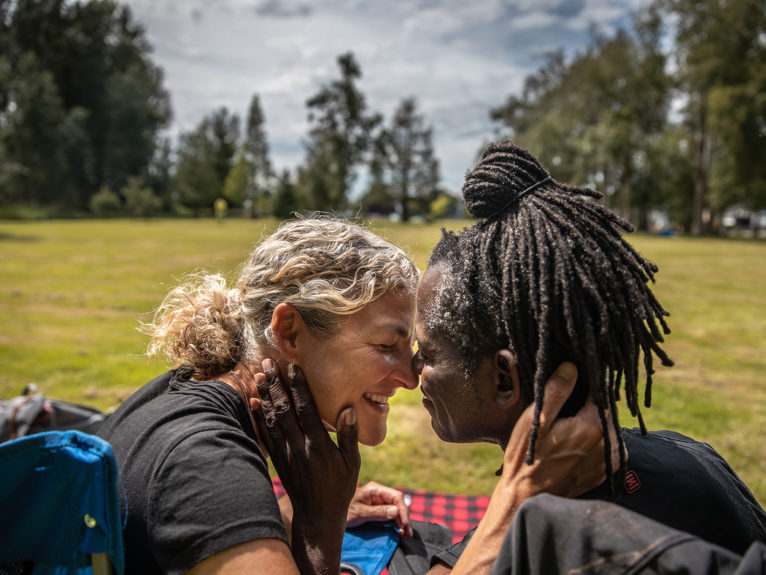 Arps (left) and Harris fell for each other online, but COVID-19 kept them from meeting in real life—until they learned about the Peace Arch Park (Photograph by David Tesinsky)

Julie Arps was new to Plenty of Fish, and didn’t realize it was suggesting Canadian men for her to date. Then she saw Lynt’s profile. He was divorced, 55, five years older than her, and had two grown kids like she did. Liked soccer, cycling and R&B music. Dreadlocks and an easygoing smile that gleamed. “He looked striking—handsome and humble at the same time,” she says. He lived 40 km from her town, and half that distance from the elementary school where she taught.

Lynt Harris was in Surrey, B.C., and Arps was in Ferndale, Wash. They met in early April, the Year of Our COVID. The border was closed to non-essential travel, a category that includes first dates. Normally a short drive punctuated by a guarded checkpoint, the distance now made them feel an ocean apart.

Still, after a few text exchanges and hours-long video calls, each one bringing them closer together (emotionally, at least), things became clear to Harris and Arps: ain’t no river wide enough.

They would be patient for the border to open, though they initially assumed their wait wouldn’t be long. A few more spring weeks, perhaps.

By May, the coronavirus pandemic wasn’t going away, nor was the cross-border ban. But Arps’s oldest son alerted her to news about the nearby anomaly known as Peace Arch Park. Straddling Surrey and Blaine, Wash., this green space allows people to cross between the United States and Canada without going through customs, as long as they stay within the 17-hectare park. Once the province and state both lifted park closures in May, couples and families split up by the temporary travel ban had a place to briefly reunite. Hundreds did.

Arps knew the park from school picnics but had no clue about this international loophole, so she called Len Saunders, a Blaine immigration lawyer often quoted in the media. He’s a long-time family friend who knew Arps’s husband Dave well before he died three years ago of brain cancer. Saunders invited Arps to his law office, a short walk from the park’s U.S.-side parking lot, saying, “I’ll be your tour guide.” At an agreed-upon time, he instructed Harris where to park on the B.C. side, walked the American over to meet her new Canadian beau and wished them a good time.

In Peace Arch Park, they could finally hold hands, hug, stroke each others’ hair—his black dreadlocks, her curly blond tresses—and see each other smile without screens as intermediaries. “I was taken straight away,” Harris says. Others freely kissed there, so Harris and Arps did, too.

They soon met at the transborder park three times a week, from 3:30 p.m., after Harris finished work at his engineering company, until the park closed at nightfall. They’d play soccer, toss a frisbee, listen to music on the small speaker Harris brought and share each other’s baking—like his raspberry-rhubarb crisp and ginger spice cake. As they did when apart, they practised distancing from others, and Arps brought a mask and gloves to use in the park’s Washington-side bathroom. On other evenings, they’d video chat until late. They conducted virtual tours of their respective houses, hoping to do so soon in person. 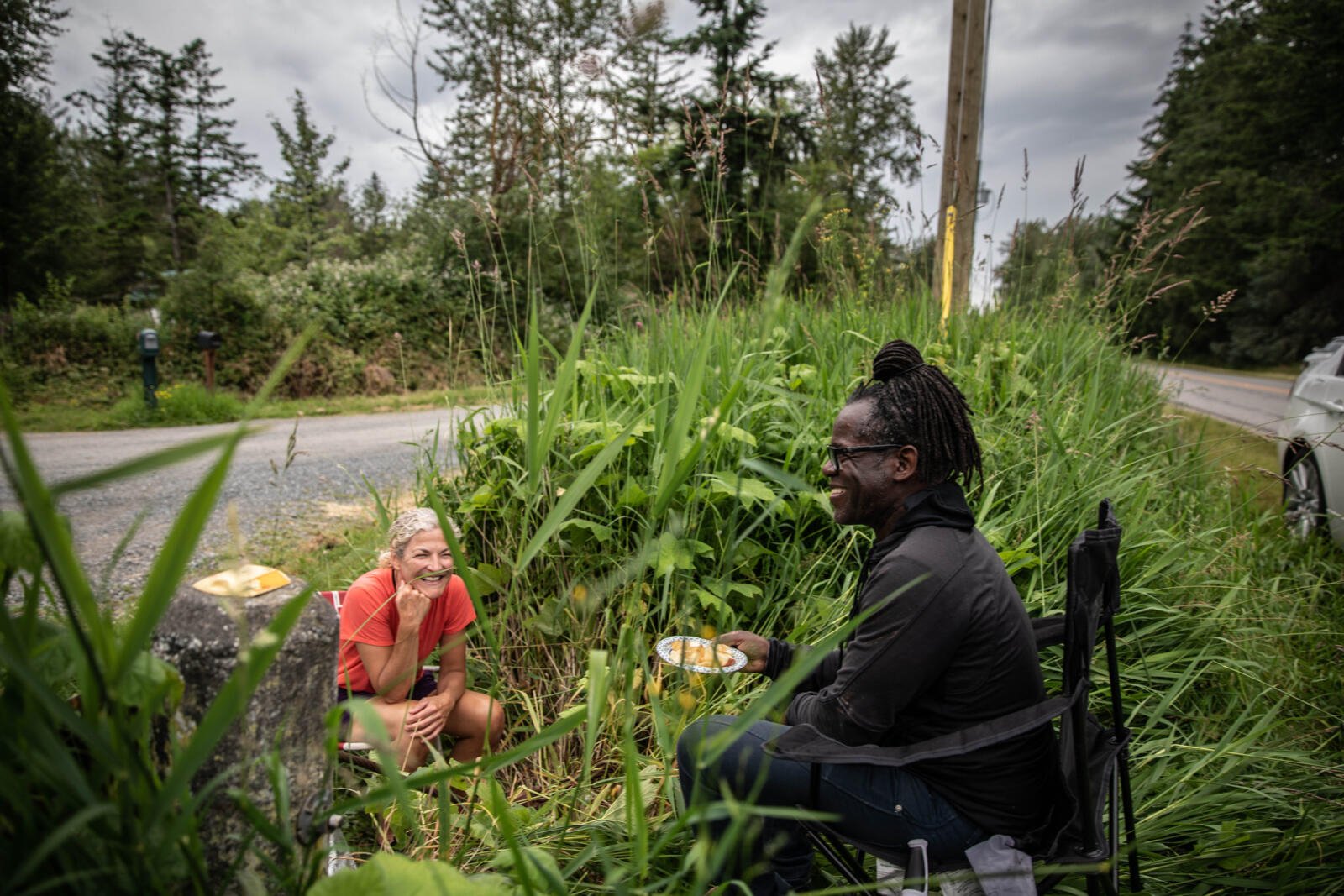 When the park briefly closed, the pair met at a grassy ditch along the B.C.-Washington border
(Photograph by David Tesinsky)

Then, in June, their rendezvous point became off limits again. B.C. shut Peace Arch Provincial Park due to overcrowding; Washington barricaded the parking lot on its side. But Saunders told Arps about another border quirk, 20 km east of the arch: Zero Avenue. That road traces the B.C. edge of the border for several kilometres of farmland and forest, while Boundary Road runs parallel metres away on the Washington side, adjacent to the town of Aldergrove in B.C. The grassy ditch between them is another makeshift meeting zone for two-country pairs. So in late June, Arps and Harris took lawn chairs, umbrellas (it rained that day) and baking to the ditch instead. They could hold hands, leaning through the tall, rain-flecked grass. “We saw a snake and a frog in there,” she says. The conditions weren’t perfect, but they were together. The second time they met there, friendly RCMP officers on patrol told Harris and Arps there was a way for them to resume meeting at Peace Arch Park: though the B.C. side remained closed, Zero Avenue runs along an eastern tract of the park that lies wholly in Washington and it was legal to cross into the green space from there. As of this writing, they’d gotten out of the ditch weeds and back to the park for 15 or 18 hours a week.

There’s another option, in theory, for Harris. While the land border is closed, he can freely fly into the U.S., as long as he quarantines for 14 days upon returning to Canada. But his company, which has cut back staff during the pandemic, can’t let him take a three-week break as their programmer and supervisor, he says.

With coronavirus cases surging anew in the U.S., Saunders has warned clients the border closure could last the whole year. But Harris and Arps are looking past a year, beyond the park and the pandemic, toward retiring and growing old together.

“Both of us have learned to go with the flow, be flexible and patient,” Arps explains. “We’re just grateful to have met each other and have the park to spend time together.”

Says Harris: “I’ve told her I’m willing to wait no matter what, because she’s the one for me.”

This article appears in print in the September 2020 issue of Maclean’s magazine with the headline, “Love on the line.” Subscribe to the monthly print magazine here.