In the 1810s, the country that would become Canada experienced year after year of ferocious cold 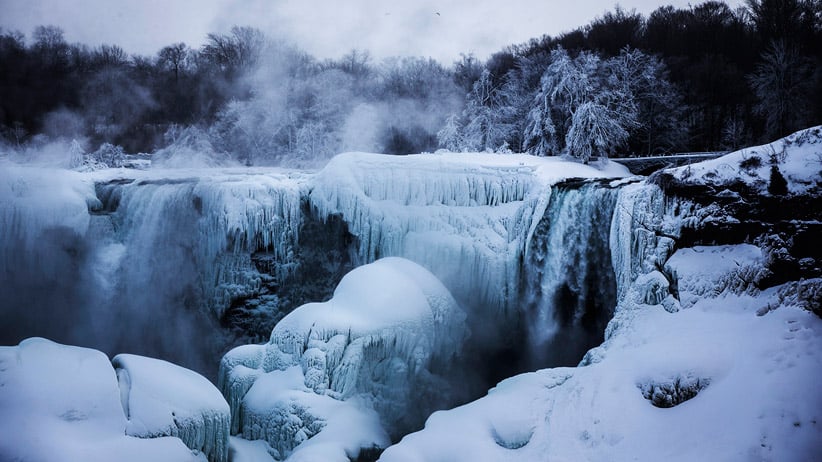 When another day of winter seems unbearable and many of us are wishing we could be anywhere but here, we can take comfort in the fact that it could be a lot worse. At least we can be reasonably sure this winter will end.

That wasn’t true 200 years ago, when the country that would become Canada was about to be plunged into the cold snap to end all cold snaps. A series of volcanic eruptions around the world tossed ash into the air, blocking the sun and cooling the Earth’s surface temperature by an average of 1 degree Fahrenheit, though some places were more affected than others.

The first massive, mysterious volcanic eruption was in 1809, possibly in Latin America. No one knows exactly where, but it’s a safe bet that it was relatively remote, owing to the dearth of records of the event.

“So things are already very cold in the early 18-teens,” says Gillen D’Arcy Wood, a professor at the University of Illinois and author of Tambora: The Eruption That Changed the World. Then, on April 10, 1815, came The Big One. Mount Tambora, in Indonesia, erupted with unfathomable force, killing nearly 100,000 people directly and letting loose a reverberating boom that could be heard more than 1,000 km away. A dark haze hung in the sky. For years afterward, spectacularly weird red and purple, murky-looking sunsets were observed all around the world.

“The volcanic aerosols formed a blanket around the whole planet, filtering the sunlight. Everything was cast into a deep freeze,” Wood says. “It was the largest eruption in probably five or 10 thousand years. It built on the momentum of the 1809 eruption, and the last years of the 18-teens are the coldest of the entire millennium.”

Year after year of record cold followed. People took to referring to the date as “18-Hundred-and-Froze-to-Death” and dubbed the misery-filled year of 1816, “The Year Without a Summer.”

It wasn’t an exaggeration. By 1816, “the Canadian land mass had historic snowstorms in June and July, sweeping down through eastern Canada and the Maritimes and down into New England,” Wood says.

A soft rain began to fall in modern-day eastern Canada on June 5, 1816. By evening, it had turned to snow and, by the next day, Kingston, Montreal and parts of Quebec were blanketed. Some reports describe two-foot snow drifts in Quebec City. On June 8, the Quebec Gazette reported, “the whole of the surrounding country was in the same state, having the appearance of the middle of December.” Birds, sheep, gardens and fruit trees all perished in the cold. In August, some lakes and rivers were still frozen as far south as Pennsylvania. Hastily planted barley and wheat crops yielded little before the real winter came around once again, not that it ever properly left. In southern Canada and New England, frost was recorded in every single month of the year.

Environment Canada wasn’t there to give minute-by-minute updates and weather warnings, and there were no satellite images to predict where the next ferocious storm would take place. No one knew what was happening, but speculation was rife and each theory was more outlandish than the last. “They had absolutely no clue that there was a volcanic origin to this event. No idea,” Wood says. “There was a providential interpretation—you know, ‘We’ve been bad, our women are unchaste, God is punishing us.’ ”

Every region of the world was affected, but the Americas were hardest hit. In Europe, anti-American sentiment stoked the theory that North America was inhospitable and getting colder every year. “The Europeans bought this because it made them feel better,” Wood says.

There was a larger theory circulating at the time that the Earth was “created in fire” and that temperatures had been in an inevitable and permanent decline ever since. The idea makes a certain sense, given that what is now known as the Little Ice Age, a period of frigid winters and cool summers, lasted roughly from the 1300s to late 1800s, following the comparatively warm and toasty early medieval times. Mount Tambora was the Little Ice Age’s last hurrah.

That blast had historic and far-reaching consequences. Climatic upset caused the worst drought in hundreds of years. “Forests seemed to be spontaneously combusting, everything was so parched,” Wood says. Estimates of climate-related deaths in North America range from the tens to hundreds of thousands, while countless more died, as epidemics of “famine-friendly” diseases such as cholera and typhus spread.

In fact, complete Armageddon was averted only because of imported grain from Russia and the midwestern United States. Without it, there would have been “a famine of biblical proportions,” Woods says. In a relatively insulated area west of the Appalachian mountains, “The grain-growing regions out in the American frontier—present-day Illinois, Indiana and Ohio—actually had decent harvests and the amount of grain they were producing and selling quintupled because of the demand. People made their fortunes,” he says. Entire farming villages in eastern North America, starving and weakened, picked up and moved west. Up to that point, it was the largest wave of pioneers settling the vast frontier.

The romantic myth of the great American West wasn’t the only legacy of that fateful April day in 1815. A quirky feature of tropical eruptions is that they cause most, but not all, of the Earth to cool down. The Arctic regions experienced a massive, unprecedented warm spell. Icebergs broke off and crowded the Atlantic shipping routes, causing innumerable shipwrecks off the coast of Halifax and present-day Newfoundland. Dozens of icebergs even floated past New York and Long Island. Local newspapers speculated that the climate was cooling down because of all the ice. It seemed the entire North American continent was being chilled like a giant glass of lemonade.

Where most people saw only frigid misery, the British Admiralty’s eyes were full of dollar signs. Melting Arctic ice meant a clear shipping route across the top of the world to China. “This period launched Arctic exploration, and that initiates the whole grand story of 19th-century British Arctic exploration, culminating in the great disaster of the Franklin Expedition,” Woods says.

Those years of cold had some positive outcomes, as well. The 1810s famine caused a transportation crisis. The only reliable form of travel at the time, horses, consumed far too much grain—fuel that was needed to feed hungry humans. So German nobleman Karl Drais started to experiment with human-powered forms of locomotion, and his  Laufmaschine—the first prototype of the modern bicycle—was born.

The climatic disaster of the 18-teens may have fallen into historic obscurity, but it provides important clues about what the effects of dramatic climate change might be on humans in the future. And next (snowstorm-less) June 8, you might want to thank your lucky stars for the period of relative volcanic quiet we’re living through.