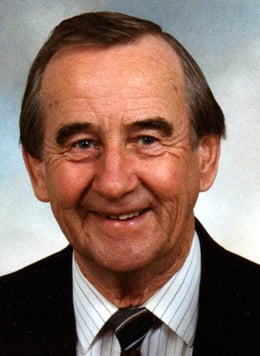 Floyd Walter Taylor was born at home in Warspite, Alta., about 100 km northeast of Edmonton, in the middle of a snowstorm on March 17, 1922. He was the second child of Hilda, a homemaker, and Walter, a grain buyer with the Alberta Wheat Pool, who was out with a horse and cutter searching for a doctor and missed his birth. Years later, Floyd’s sister Margaret, who was four years older, would joke that Floyd was too impatient to wait for medical help. She also recalled that, as a baby, Floyd once rolled off a table; she had been told to watch him and didn’t. Still, she remembered pulling the little blond boy around in his red wagon without incident in the summer and pushing him on his sled, an Eaton’s Flyer, in the winter. Floyd grew up in the central Alberta village of Elnora, where he played hockey and took piano lessons, learning to pound out one song, Alexander’s Ragtime Band. From his earliest days, he had a sweet tooth: whenever the children went berry picking, he ate more than he put in his pail.

Floyd was an intelligent, busy child who didn’t share his sister’s love for school: once when their schoolhouse burned to the ground, he laughed with glee while she cried. After Grade 11, he moved to Calgary to take an automotive course. He was just 20, tall and handsome, when he joined the Royal Canadian Navy, serving for three years on the HMCS Prince Robert, an armed merchant cruiser that escorted troop and supply ships between England, Italy and North Africa during the Second World War. Short of allowing that he saw a lot of action and often had to stay up all night on watch, he rarely talked about his experiences, although they stirred a profound sense of nationalism. After the war, Floyd met the love of his life, schoolteacher Mildred Larsen, on a bus trip home. He asked to sit beside her. They were married in Calgary on April 19, 1946.

Like his dad before him, Floyd first worked as a grain buyer, while Mildred taught school. Their first child, Floyd Scott, was born in 1950, followed by daughters Suzanne and Lynda, born 13 months apart in 1956 and 1957 and often dressed as twins. In those days, Floyd “did a lot of shifting around,” Lynda says. He ran a Texaco station and a used car lot. He went into the furniture business and sold life insurance. In 1965, he found a job that suited him with the public trustee’s office, managing the financial affairs of the vulnerable, Lynda says, “such as children whose parents died without a will.” He liked the investigative part of the work, she says. “And he liked helping people.” From there, Floyd moved to the Alberta ombudsman’s office in 1974, investigating complaints from the public about unfair treatment by government departments including social services and health. “He looked into all kinds of complaints,” Lynda says. “At one point he investigated two psychiatric hospitals.” Floyd was honest and impartial, Lynda says. “And he was tenacious. If he got into a project, he didn’t let it go until it was finished.” He liked the work so much that when he retired in 1984, he started his own private investigation company. He also helped his daughter Suzanne build her high-end fashion storein Edmonton. “He was entrepreneurial,” Suzanne says. Adds Lynda, “He could never sit still for more than 10 minutes.”

As the years passed, Mildred began to suffer from a number of health problems. Floyd carried trays of food to her in bed and vacuumed the house, sometimes to the strains of Rhinestone Cowboy on the stereo. Soon he began to suffer from his own illnesses. After major surgery for an abdominal aortic aneurysm in 2003 and a car accident in 2004, he started to act oddly. Mildred would sometimes find him in the kitchen late at night devouring ice cream. And he started to wander. In 2005, he was diagnosed with vascular dementia, possibly as a result of oxygen deprivation during the operation. On Sept. 19, 2007, Lynda’s two little dogs, Pandy and Bob, creatures Floyd had treated almost like his children, rushed to greet him on a visit to her home. Startled, he fell and broke his hip. On Dec. 21, at age 85, he was admitted to the Kipnes Centre for Veterans in Edmonton, the very kind of government-run facility he once investigated. There, Floyd still showed signs of his earlier charm. “I could run a mile, jump a stile and drink a case of beer,” he often said.

On Sept. 12, according to the family, Floyd went to his unit’s communal kitchen to get a midnight snack. He found a jug of industrial strength dishwashing soap that contained lye and, perhaps thinking it was juice, poured some of the red liquid into a container and drank. He was so severely burned internally that he died at the Misericordia Community Hospital four days later. His death is under investigation by Alberta Health Services.