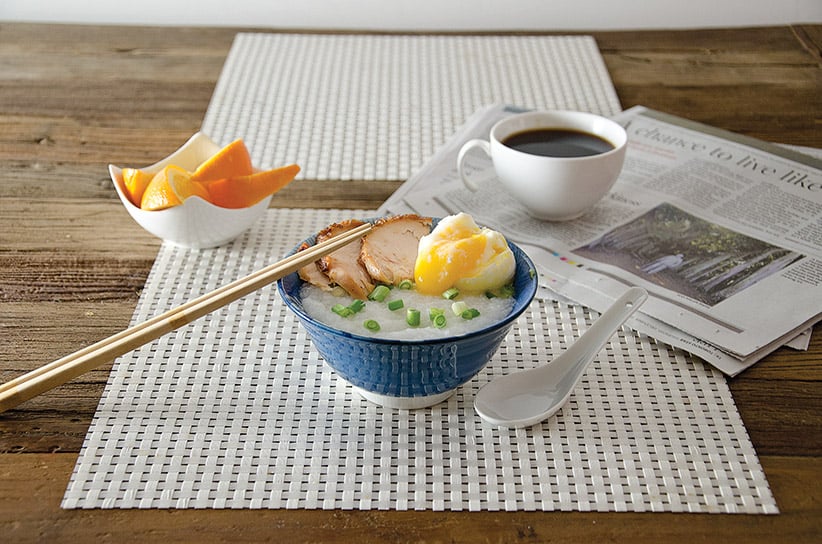 The North American palate has broadened remarkably in the past decade or two. Curries figure in the blandest of restaurant menus; supermarkets carry an array of spices, from cumin to star anise. When it comes to breakfast, though, it’s another matter. At the Drake Devonshire Inn, the outpost of Toronto’s Drake Hotel in Prince Edward County, Ont., the dinner menu boasts scrumptious lamb schnitzel with harissa eggplant, and cabbage rolls with Korean chili broth, yet the brunch menu sticks with items like blueberry scones with preserves and clotted cream, and eggs benny. “The favourites are the old standbys like pancakes and gravlax,” says the head chef, Matthew DeMille, “because I think our clientele, especially at brunch, gravitates toward comfort.”

Breakfast may be the final culinary frontier—the last thing to be tampered with, globalized, mashed up and re-thought. For some reason spices in particular at the breakfast table offend many North Americans. “A couple of weeks ago I started adding—brace yourself—curry powder to my oatmeal,” admitted one experimenter who shall remain nameless. “My husband, part Irish, German, and Russian/Polish and raised in small-town Ontario, threatened to divorce me.”

That last cultural barrier is on the verge of being broken. The yogourt manufacturer Chobani has announced a new line of savoury yogourts, to launch this year: its Greek Sriracha Mango starts with a fruity base, which can be mixed with the accompanying Sriracha-coated rice crisps, mini sesame sticks, and roasted cashew pieces. A Chipotle Pineapple version allows open-minded consumers to mix in chipotle granola, smoked almonds, and pumpkin seeds.

Chobani may be tiptoeing into a savoury breakfast moment, as are breakfast restaurants such as Oatmeals in New York’s Greenwich Village, whose menu includes a “truffle risOATto,” a version with sundried tomato, pesto and parmesan, and “the Canadian,” with—what else?—cheese and bacon. A few weeks ago, the food site Epicurious ran a series of oatmeal recipes, which incorporated roasted vegetables and fried eggs. “Breakfast bowls,” with ingredients like seaweed, butternut squash and kale, are popping up in magazines and on food TV. And avocado toast has been on the uptick for a few years—often with cheese or eggs as accompaniment.

There’s a decline in the consumption of breakfast cereal, says Cara Rosenbloom, a Toronto-based registered dietitian—“mostly because people associate it with sugar.” Kellogg and General Mills report declining cereal sales. More Canadians now eat plain Greek yogourt at breakfast, part of a push toward more protein. But why no spice? “My assumption would be it’s based on habit,” she says. “People associate spicier foods with later in the day.”

The fear of assertively spiced breakfast is really a Western problem. Other parts of the world have embraced savoury breakfasts since before the dawn of back bacon. There’s shakshuka, a dish of eggs poached in a spiced tomato-and-red-pepper sauce eaten in Tunisia and Israel, and Chinese congee, a savoury rice porridge (and bubur ayam, an Indonesian congee laced with chicken and condiments). Southern India has a doughnut (vada) and a cream-of-wheat preparation (uppuma), that are both savoury, employing onions, ginger and green chillies. There’s the Jamaican breakfast of ackee fruit and saltfish, and Mexican huevos rancheros, which doubles as a hangover cure, and Bolivia’s chai-spiced quinoa bowls, and on it goes around the globe.

DeMille admits when he himself has breakfast “there’s half a bottle of Sriracha on it, no matter what it is.” He thinks things are slowly changing on the spice front. “Our chicken and waffles would be the most aggressive we would go at brunch,” he says. The chicken coating is spiced, and the maple syrup has chili, roasted garlic and fresh thyme in it. As for the next step, “it’ll just take an open mind and a little nudging. Maybe I will try something on the breakfast menu in the new year.”

It’s about time more people did. Brunch is a meal meant to stimulate and awaken the senses. Is there a better way to do that than with something richly spiced?