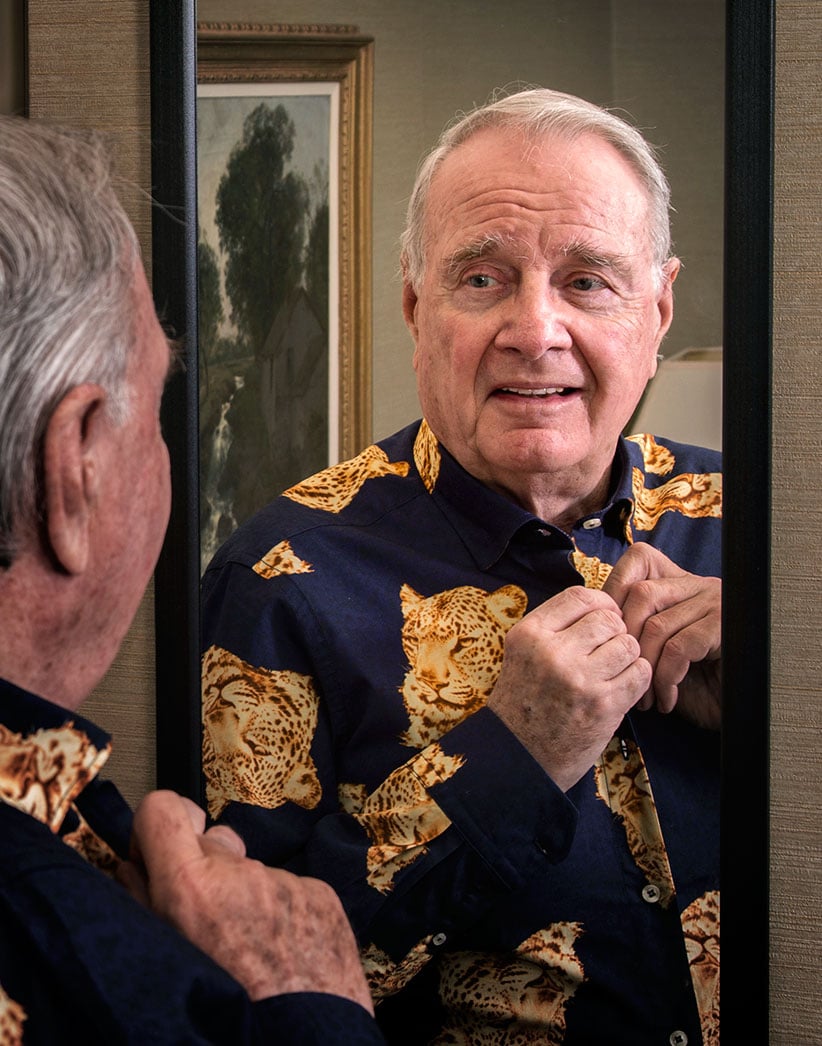 Paul Martin’s name is all over Turkey. On a windowpane in Şişli. A plastic bag in Trabzon. And there on a pack of underwear in Sultanahmet. It always causes a stir, and confuses one man especially: Paul Martin. “During the tourist season, I get photographs from Canadians,” says the former prime minister. They show a clothing chain called Paul Martin Canadian.

As those photos suggest, Paul Martin the man and Paul Martin the fashion brand have little in common. Marine life rendered in neon colours, motorcycles against a fuchsia background, miniature umbrellas and strawberries and turtles—Paul Martin Canadian’s textile sensibility is lively. Only Paul Martin boxer shorts, available in a selection of sensible neutrals, offer a reprieve from psychedelic print and colour.

But why does a store with dozens of Turkish locations boast that it’s Canadian? Why name itself after a Canadian prime minister? And why this prime minister? The former PM’s staff developed some theories. They joked that the company might have been founded in 2006, the year Martin left office. They thought the owner might have met the personable politician and made an elaborate homage. They thought it couldn’t be a coincidence.

On every count, they were wrong. 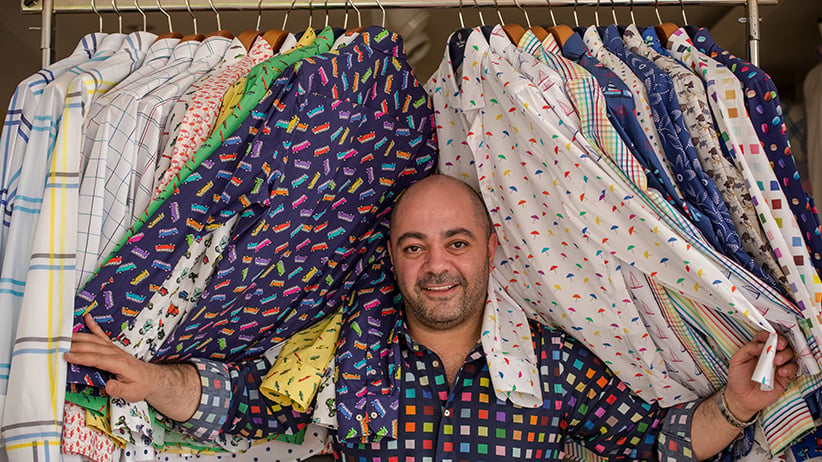 Murat Cozer, the founder of Paul Martin shirts, poses for a portrait in his showroom on Wednesday, May 18, 2016 in Istanbul, Turkey. (Photograph by Nicole Tung)

Over tea in Istanbul, Murat Çözer, marketer of Paul Martin Canadian, tells it like this. He was helping launch the clothing brand in 2008 (one whose aesthetic happens to bear an uncanny resemblance to British designer Paul Smith’s line). Çözer recalled an acquaintance, an Austrian guy named Paul Martin. The name sounds posh, Çözer thought. He liked that. After a few months and some googling, he discovered that another Paul Martin was once a world leader. World leaders are also posh, he thought. He liked that too.

That’s why Canada was perfect. Turkey hosts a thriving knock-off industry, and all the knock-off fashion brands pretend to be Italian or French, Çözer realized. Nobody pretends to be Canadian.

Thus, Paul Martin Canadian was born. Images of maple leaves are now fastened to the Istanbul showroom’s walls, embroidered on shirt pockets, emblazoned in silver and gold on coat hangers. The leaves aren’t exact replicas, but they are like the Canadian Maple Leaf—and in the knock-off business, being like something is good enough. 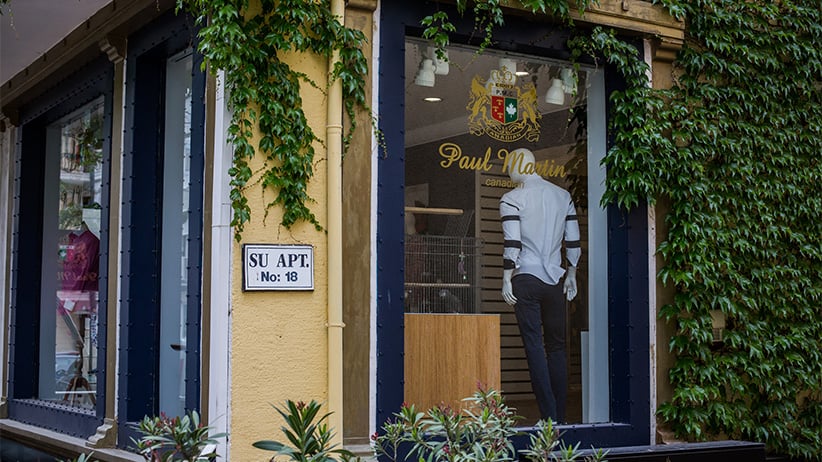 The exterior of the Paul Martin showroom as seen on Wednesday, May 18, 2016 in Istanbul, Turkey. (Photograph by Nicole Tung)

This philosophy animates the brand’s most detailed Canadiana fantasies, such as one stamped across an exuberant red plaid. “ROYAL ROQUE ISLAND TORONTO PAUL MARTIN RACE SOUTHSEA YACHT CLUB CHALLENGE ULTIMATE,” reads a dress shirt. The existence of Royal Roque Island, the Southsea Yacht Club, and a Challenge Ultimate race can’t be confirmed, but buyers seem not to care.

“Business is growing,” Çözer says. Paul Martin Canadian can charge $100 a shirt. In Istanbul’s ritziest knock-off district, Paul Martin has the ritziest storefront, easily out-glitzing the neighbours, including “Sir Diore” and “Louis Vardel.” And it’s gone global, selling in Dubai, Germany, Iraq, even the United States. It hasn’t broken into every market, though: You can’t find Paul Martin Canadian in Canada. “In Canada, there’s no demand for Paul Martin,” Çözer shrugs.

In local ads, a portly Turkish musician brandishes a clarinet, a sultry gaze and several open button holes. Çözer is picky about brand ambassadors. He is shown photographs of several men, including Ryan Gosling, Justin Bieber, Justin Trudeau and Paul Martin himself, and after studying them, Çözer declares that only one Canadian could successfully embody the Paul Martin look: Gosling. 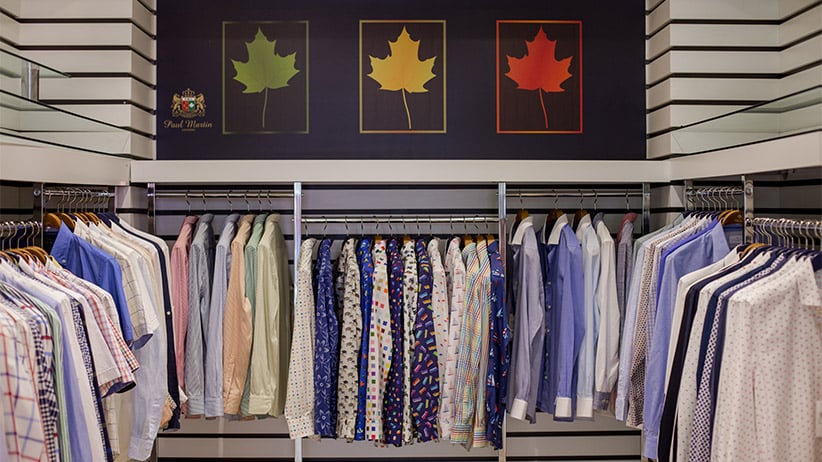 Various shirts on display, with the maple leaf logo above in the Paul Martin showroom on Wednesday, May 18, 2016 in Istanbul, Turkey. (Photograph by Nicole Tung)

The former prime minister isn’t insulted. “I’m going to let them make their own decisions on who’s going to model their shirts,” he says. Nor is he bothered by the pilfering of his name. “The next time I’m in Istanbul I’m going to go to the store!”

The store welcomes him. Though Çözer can’t comment on Paul Martin’s contributions to Indigenous issues or the G20, he calls him “the Big Boss” and gladly sent him some free shirts. The jaguar and maple leaf prints are a style departure for a man who often favours Brooks Brothers; in his official portrait revealed this month, he wore plain white.

“Very traditional.” Çözer observes Martin’s portrait with a slight frown. He’d never criticize the Big Boss’s sartorial decisions. Still, had Paul Martin worn Paul Martin for his portrait, Çözer would have suggested something with a contrasting blue collar and cuffs. A Paul Martin shirt could have added some pizzazz to Centre Block’s corridor of staid button-downs, just as Paul Martin himself has added a bit of posh to Istanbul’s streets.