For Canadian Thanksgiving check out this 1930s recipe from Maclean's 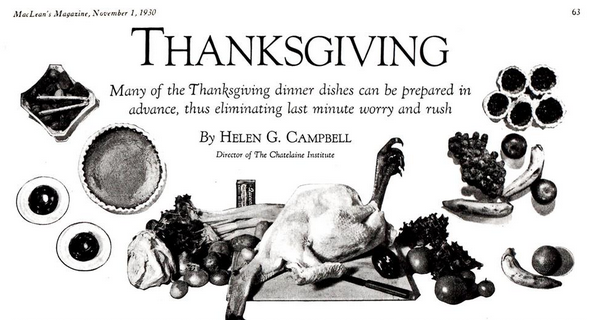 In the early years of our 116-year history, Maclean’s published a “Women and the Home” section, often highlighting recipes from Helen G. Campbell, the director of the Chatelaine Institute. So to usher in our calendar’s tastiest day, we dove into our archives and found a full Thanksgiving menu from 1930, offering complete recipes and hosting tips from yesteryear. (I hope you have access to a lot of gelatine and molds.) Enjoy—and happy Thanksgiving, to you and yours.

Sign up for the Maclean’s archives here, and try a free trial today. 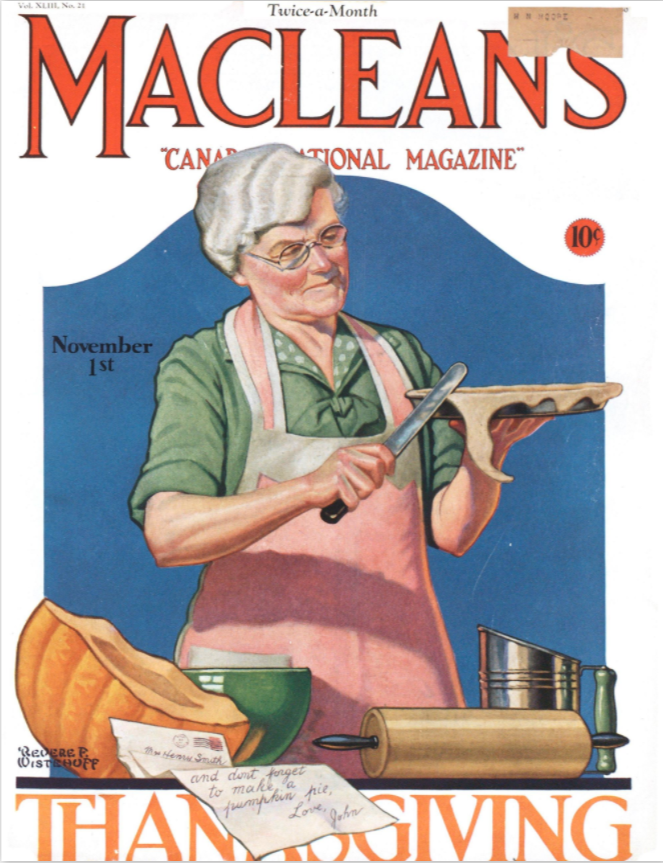 Menu for the Thanksgiving Dinner

Many of the Thanksgiving dinner dishes can be prepared in advance, thus eliminating last minute worry and rush

The season for the giving of thanks has come. It is one of our traditions—this public acknowledgment of gratitude for the richness of the harvest, the fulfillment of the earth’s springtime promise.

Thanksgiving Day is celebrated with sincerity and gladness throughout the nation. The Thanksgiving feast is an honoured custom, a time of joyous family reunion and happy gathering of friends. The chatelaine of the modern home keeps up with the old tradition, and there is a cheerful stir in many households in anticipation and preparation for the gala meal. The housekeeper maps out her programme well in advance, for careful thought and organization are necessary to make the meal successful and enjoyable.

The menu is the first consideration. It should be typical of the feast—festive enough to suit the occasion but not so elaborate that it taxes the purse unduly or makes too many demands upon the housekeeper’s strength and time. Even for “company” meals, dietetic principles should not be entirely overlooked. Sometimes on holiday celebrations we eat “not wisely but too well,” but the dietary habits of the present generation have made the groaning board less common. The simpler meal is now more welcome. But it must be well chosen, well prepared and served; each course delicious and combining to make the whole satisfying and appealing.

Certain points should be kept in mind in planning the menu. If you begin with a fruit cup which is nowadays so popular, do not repeat the same flavour in another course. A salad of vegetables rather than fruit is more suitable in this case, and the dessert should not contain the same fruits as served in the first course.

The texture of the food should be varied enough to prevent monotony. When a molded salad is used, avoid a gelatine dish for dessert; one which provides contrast is more pleasing. Flavours of foods in the same course should harmonize, and attractive appearance counts for much in the interest and enjoyment of the dishes. It is more economical to choose foods in season, and at Thanksgiving time there is no dearth of wholesome appetizing products ready to the housekeeper’s hand.

With the menu decided upon, the systematic housekeeper makes a list of necessary supplies, checks over her staples, and prepares her market order. It is best to do so early, for some of the work of preparation for the meal can be done a day or two before. It saves anxiety and last-minute fuss if supplies are delivered in plenty of time, and staple foods such as seasonings, spices, flour and other essentials are on hand.

The menu suggested is one which need not be difficult to prepare on Thanksgiving Day. The cranberry jelly and the salad can be made in advance, the turkey may be stuffed and trussed, vegetables cleaned, and salad dressing made. Pie-filling and pastry may be prepared beforehand. It is a simple matter then to add the pumpkin to the pastry shells, and bake early in the morning before the oven is needed for the turkey. Melon balls may be scooped out at a convenient time in the forenoon und kept in the refrigerator until meal time. Salads may also be turned out, placed on the serving plates, and kept cool. Relishes also should be arranged on serving dishes and chilled. Nuts or raisins may be arranged, too. While the turkey is baking—three and a half hours for a ten-pound fowl—the sweet potato casserole may be prepared and put to cook, allowing for this the time stated in the recipe. The cauliflower requires a shorter time, and the sauce may be made while it is cooking.

As the meal cooks, the table may be set, flowers or other decorations arranged, and serving dishes placed in the warming oven. At the last minute water glasses should be filled, and the first course may be set in place before the dinner is announced.

A simpler and less expensive meal than the one suggested may be decided upon. Chicken may be substituted for the turkey if the party is small, and other changes can be made in the menu to suit the requirements. Soup may form the first course, omitting the melon cup, or soup may be served as a second course if a more elaborate meal is desired. If soup takes the place of the melon, a salad of fruit may replace the molded vegetable one. Instead of the pumpkin pie, mince pie or carrot pudding is acceptable and ice cream is always well liked. A plain ice cream with sauce or other accompaniment or a fancier, richer frozen dessert is appropriate for the Thanksgiving celebration.

Cook the onion in the butter for two or three minutes, add the sausage meat and cook for five minutes. Mix the breadcrumbs with the seasonings and combine with the sausage mixture. Add the beaten egg.

Pour melted butter and liquor over the crumbs. Add the oysters from which the tough muscle has been removed, the seasonings, and mix well.

Pick over the berries, wash, add the water and cook for twenty minutes. Press through a sieve and boil for about three minutes. Add the sugar. Cook for two minutes, turn into a mold and chill.

Slice the potatoes and arrange in layers i in a baking dish, sprinkling each layer with chopped nuts. Make a syrup by : boiling the sugar and water for three minutes. Add three tablespoonfuls of the I butter, a pinch of salt, and pour the 1 mixture over the potatoes. Dot with the remaining butter and bake for twenty to 1 twenty-five minutes in a moderate oven.

Soak the gelatine in cold water. Dissolve in the boiling water. Add the sugar, seasoning, vinegar and onion. Allow the mixture to cool and begin to set, then add the beets and celery. Mold in individual dishes and serve on lettuce with mayonnaise and hard cooked egg white.

Stir together the pumpkin, egg and milk. Combine with the sifted dry ingredients, and pour into a pie plate lined with pastry. Bake in a moderate oven.— 350 deg. Fahr.—for thirty-five to forty minutes. This may be served plain or topped with whipped cream.

Sort and wash the cranberries. Add the water and cook in a covered pan for about ten minutes, or until the skins burst. Add the sugar and salt, allow to cool, and pour into a pie plate lined with pastry. Arrange a lattice of strips of pastry across the top and bake in a moderate oven until brown. The cranberry mixture may be also baked in individual pastry cases with or without the lattice decoration.

Scald the milk and add slowly to the mixed sugar and cornstarch, stirring constantly. Cook for twenty to twenty-five minutes over hot water, then add the beaten egg yolks and cook for five more minutes, continuing to stir. Allow to cool partly and fold in the beaten egg whites to which the salt has been added. While this mixture is chilling, prepare the fruits, mix and put to chill; chop the nuts and whip the cream. Mix the custard, fruits and nuts. Add the fruit juice, fold in the whipped cream and freeze.

Soak the gelatine in cold water. Make a syrup by boiling for ten minutes the sugar and the water. Pour the boiling syrup over the soaked gelatine and mix well. To this mixture add the strained apple sauce, the lemon juice and the cherries cut in small pieces. Pour into individual wet molds and allow to set. Serve garnished with whipped cream and red and green cherries.