A lifelong activist, she became the only Canadian to win the right to get a doctor’s help to die, after a legal battle in B.C. 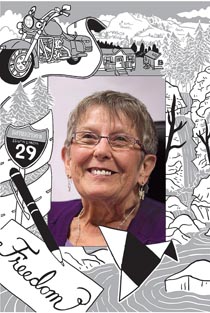 Gloria Jean Taylor was born in Trail, B.C., on March 30, 1948, the first of four daughters (Shirley arrived next, followed by Betty, then Patty). Her father, Fred Fomenoff, was a construction worker and a bus driver; her mother, Anne, was the anchor of the family home in Castlegar, a West Kootenay town of 7,000. “Her daddy was a hunter and a fisherman, and he taught her how to track a deer and catch a fish,” says Anne. “She was tomboyish in a sense, and definitely an outdoor person.”

It was dad who taught young Gloria another invaluable lesson: how to stick up for herself. She was still in elementary school, teased and bullied by another student, when she came home in tears. “Her dad told her what to do,” Anne says, smiling at the memory. “She never came home crying again. She cleaned their clock good.”

Gloria held so many jobs, and advocated for so many different causes, that even she had trouble remembering each one. (An avid writer and poet, she often joked about how she was going to list them all someday.) She was a receptionist. A hairdresser. A letter sorter for Canada Post. A parole supervisor. “Any job she had wasn’t exciting enough or challenging enough,” her mother says. “She was definitely a free spirit.”

Gloria met Pat Taylor in the fall of 1971. Six weeks later, on Christmas Eve, they were married. “She was tender, loving and very compassionate,” says Jason, the eldest of her two sons. “I can’t tell you how many foster kids we took in over the years. She gave of herself more than anybody I’ve ever known.” Although Gloria and her husband eventually divorced, they remained dear friends and devoted parents.

Single again, Gloria applied for a motorcycle licence and purchased her first bike, a Yamaha. A year later, she bought her beloved Harley-Davidson Super Glide, custom-painted her favourite colour—purple—and adorned with unicorns. She logged thousands of kilometres gripping those handlebars, her shoulders covered in elaborate tattoos.

In her 50s, Gloria took over as property manager of a trailer park near Kelowna, where she owned a three-bedroom mobile home. (Her son Clinton lived nearby, with his daughter Gabrielle.) Around then, Gloria began complaining about cramping in her hands and feet; by 2006, the spasms had grown so severe she could barely use a key or hold a pen. “My mom had beautiful, beautiful handwriting,” Jason says. “One day, she told me she couldn’t hold up her pinky finger anymore. It would drag along the page.” In January 2010, a specialist in Vancouver confirmed the devastating news: Gloria was suffering from amyotrophic lateral sclerosis (ALS), otherwise known as Lou Gehrig’s disease. The doctor told her she would be paralyzed in six months, and likely dead by Christmas.

Ever the fighter, Gloria beat the odds. Christmas came and went—and so did the next one. But the disease took its toll, ravaging her muscles and forcing her to quit her latest job at a group home for disabled adults. Some days, Gloria couldn’t pull down her own bedsheets or brush her own teeth.

In the summer of 2011, Gloria saw a news report about the B.C. Civil Liberties Association launching a court challenge against Canada’s assisted-dying laws. Gloria phoned the association, and by the time the case reached a courtroom later that year, she was the lead plaintiff. “I live in apprehension that my death will be slow, difficult, unpleasant, painful, undignified and inconsistent with the values and principles I have tried to live by,” she wrote in an affidavit. “I want the legal right to die peacefully, at the time of my own choosing, in the embrace of my family and friends.”

In June, Gloria won her battle. In a landmark ruling, the B.C. Supreme Court ruled that the Criminal Code provisions prohibiting physician-assisted suicide violated her Charter rights to life, liberty and equality. When her lawyer phoned to share the news, Gloria broke down in tears. It had nothing to do with whether she was going to go through with an assisted suicide,” her son says. “It was all about having the choice: if it got too bad, then she would have the ability to do something on her own terms.”

In the end, Gloria did not need to make that choice. Just before Thanksgiving, she was admitted to hospital with a severe infection from a perforated colon. She died Oct. 4, surrounded by family and friends. Gloria was 64.