1916 series: What the Great War meant for Africa

For Africa the First World War “was both the culmination of European imperialism and the beginning of its decline." 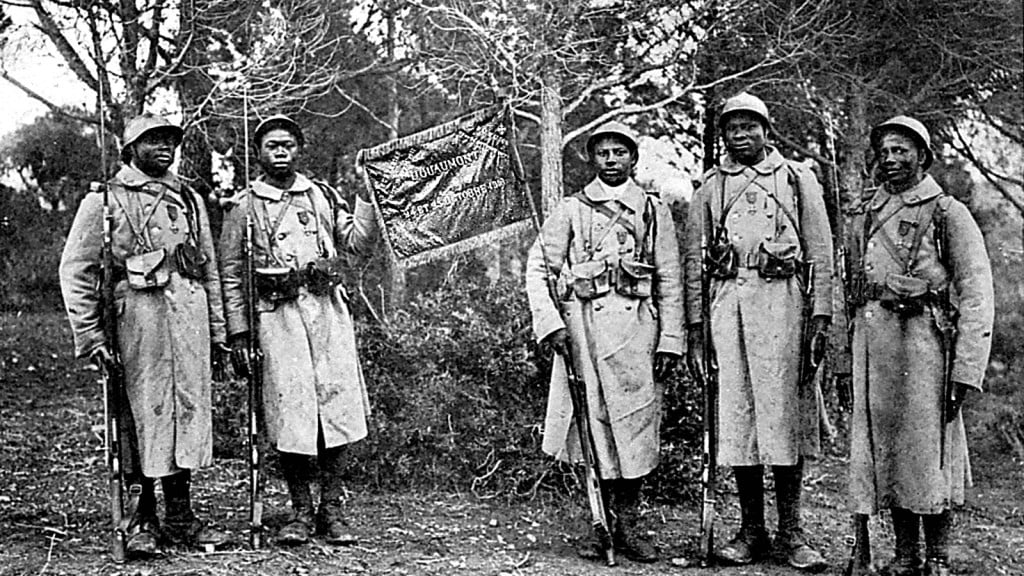 In his 1916: A Global History, a month-by-month account of the First World War’s hinge year—the one after which no negotiated peace could possibly have restored the world that was—Irish historian Keith Jeffery turned his attention to the war in Africa. Unlike in Asia, where many countries had some degree of control over their involvement, Africans had little choice: in 1914 there were only two independent states in the entire continent (Ethiopia and Liberia); the rest were parcelled out among European powers, almost all of them immediate or eventual belligerents. In the popular memory of most of the Great War’s combatant nations, the fighting in Africa is at best a sideshow compared to the slaughter in France or the revolution in Russia. (It’s perhaps best remembered as the setting for the 1951 film The African Queen, in which tramp steamer captain Humphrey Bogart—playing a Canadian because he couldn’t master a Cockney accent—and spinster missionary Katherine Hepburn manage to sink a German gunboat. It won Bogie his only Oscar.)

But in Africa, where, in the words of historian John Iliffe, the war “was both the culmination of European imperialism and the beginning of its decline,” it was no sideshow. The fighting began immediately in August 1914, even though European colonists were uneasy about so few white men fighting each other in the presence of so many black Africans, and went on past the Armistice that stopped fighting in France and Belgium. The number of white casualties was a fraction of the Western Front toll, but the upheaval in African communities was overwhelming. Just the British, in East Africa alone, had almost a million Africans serving their forces—as gun porters, medical staff, casual labour and the catch-all term of “carriers.” The French on the west side of the continent conscripted—by means observers compared to the tactics of the illegal slave trade—171,000 troops. In all, over two million Africans served European armies and upwards of 200,000 died from it.

Then there were, as in the restive southern flank of the Czarist empire, the requisitions. In Nyasaland (later part of Rhodesia, now Malawi), the Great War became known as “the war of the thangata,” a Chichewa word meaning “help,” in reference to the demands of British colonial officials. That meant food, troops and labourers, and eventually absorbed 200,000 men, two-thirds of the adult male population, sparking uprisings and local famines. In Senegal, French recruiters ran man hunts, paying local agents well for delivered “recruits” who frequently arrived bound. It took several decades—and another world war—before the Europeans finally began departing, but several historians quoted by Jeffery point out how the experiences of 1914-1918 showed Africans the true vulnerability of their European overlords.

And how little they received in turn. The Northern Rhodesian war memorial, dedicated to those “who gave their lives for the Empire” lists the names of three dozen white men and the words, “also many other natives of the territory of whose names no complete record exists.” The Imperial (now Commonwealth) War Graves Commission was dedicated to the revolutionary notion that all combatants, regardless of rank, were to be commemorated, but in Africa a familiar racial hierarchy ruled. In 1925, Lord Arthur Browne, principal assistant secretary of the commission, ordered that even if identified Africans were known to be in particular cemetery plots their names would not be included in the register, because “we should be unnecessarily drawing attention to the fact we have neglected to commemorate [them] by a headstone.” Best to forget, as the world at large outside Africa has done, about the Great War there.