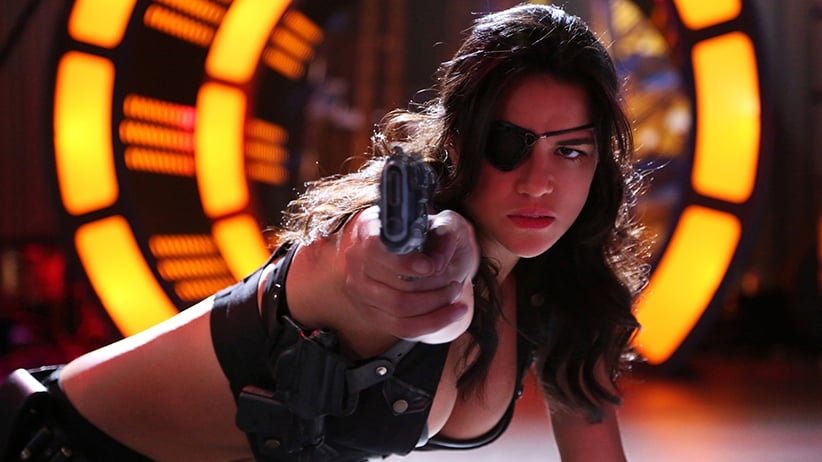 Last week, Michelle Rodriguez, an American actress best known for her role in the action-film franchise The Fast and the Furious, gave TMZ a quote to die for. When asked whether she’d been cast in the titular superhero role in the next instalment of Green Lantern—the character was last portrayed by Ryan Reynolds in 2011— Rodriguez balked. “I think it’s so stupid because of all this ‘minorities in Hollywood’ thing. Stop taking all the white people’s superheroes,” she insisted. “Make up your own.” Rodriguez’s remarks were made off the cuff; she was walking to her car when the paparazzi approached her and, like Patricia Arquette at the Oscars, it’s hard to tell if she was entirely sober. But her comments erupted in a storm of controversy online—a storm Rodriguez (who is the daughter of a Puerto Rican and a Dominican) attempted to weather in a video she posted to Facebook last weekend. What she meant, she explained, is that “instead of trying to turn a girl character into a guy, or a white character into a black character or Latin character, people should stop being lazy—and people should actually make an effort in Hollywood to develop their own mythology.”

Rodriguez, a perpetual sidekick to whatever male action star appears with her onscreen, may be an unlikely champion of the status quo, but she’s certainly not its first. Issues of representation and diversity are front and centre in Hollywood right now—specifically, in the aftermath of the Oscars, where many believe the civil-rights film Selma was snubbed for a Best Director nod.

Yet it appears there are few issues more contentious, when it comes to diversity in popular culture, than that of American comic-book heroes—heroes who have been changing form on the page for years (in 2014, Marvel introduced Samuel Wilson, the first-ever black Captain America and, in 2012, DC introduced Simon Baz, the first Muslim American Green Lantern), but who remain, for the most part, fair-skinned and fair-haired oscreen. And for good reason.

Listen to Chip Zdarsky discuss race and superheroes on The Thrill, our pop-culture podcast

When Rodriguez quashed the Green Lantern rumour, she made some strange bedfellows: a horde of white, male, social media users who applauded her defence of the traditional Caucasian dude in a cape. This is the same demographic, presumably, up in arms about rumours that the next onscreen Spider-Man will not be Peter Parker, but newer Spidey character Miles Morales, Marvel’s first black-Hispanic Spider-Man, or the news that the Ghostbusters remake will feature an all-female cast.

It’s quite possible that the opposition to change hides thinly veiled racism and sexism—similar in spirit to American conservative pundit Rush Limbaugh’s recent opposition to a black James Bond. (Rumours surfaced last year about Luther actor Idris Elba possibly replacing blond, blue-eyed Daniel Craig as 007.) But it’s just as likely, I suspect, that the voices loudly protesting this potential shift in representation aren’t so much prejudiced as they are infantile. Everyone likes to think of the characters they idolized in childhood as unchanged by time. (It’s worth noting that the same demographic is distraught when filmmakers take creative liberties with its favourite heroes’ costumes and storylines.) The uproar may have as much to do with nitpicking as with bigotry.

But this doesn’t make me any more sympathetic to these kind of protestations. Hollywood is overflowing with remakes, each one less inspired than the last. Some diversity—any diversity—would be a welcome change. It’s easy to see where Rodriguez is coming from with her suggestion that minorities develop their own mythologies: The mythologies regurgitated by the box office nearly every year, from Lord of the Rings to James Bond to Spider-Man, are tired.

And yet, mythologies are mythologies for a reason: They are universal. We don’t repeatedly line up to see Bond and Spider-Man simply because Hollywood shoves them down our throats, but because we love the stories so much, we are willing to sit through them in any iteration, no matter how awful, again and again. In the end, it is precisely because mythologies can survive anything that we should open them up to change. (And if the Star Wars franchise can survive Hayden Christensen, surely it can survive a black Stormtrooper). Myths are not fragile, nuanced narratives, at risk of crumbling at the slightest alteration. They are stories of big, broad archetypes: They represent all of us, which means there is no reason why the characters within them can’t look like us, too. It’s time that those who have always had heroes who mirror them in body and mind make room for a generation of heroes who mirror somebody new. It’s the adult thing to do.