The toy, emblazoned in the Hudson's Bay Company's iconic colours, is a hot-ticket reminder of a colonial past 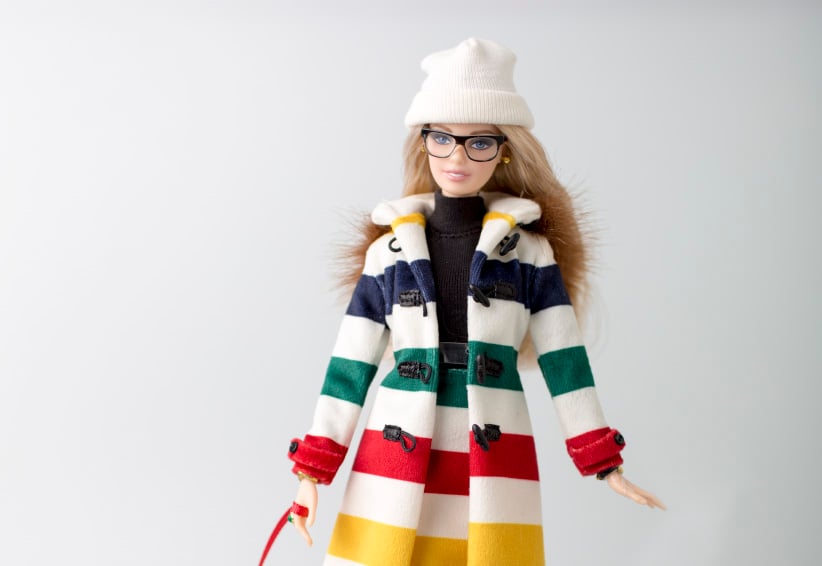 Yellow, blue, green, red: those four stripes of colour on the Hudson’s Bay Company four-point blanket are as iconic to Canadians as the Maple Leaf. And now Barbie, the biggest name in make-believe fashion, comes swaddled in them, sporting a striped jacket, sipping from a striped travel mug, checking her phone in its striped case and walking a poodle clad in a striped jacket. But the Hudson’s Bay Barbie (retailing for $59.99), whose mantras are “strive to better yourself” and “always seek adventure,” comes with some baggage along with those accessories.

“First Nations people were taken advantage of by the Hudson’s Bay Company,” says Becki Bitternose, a Saulteaux-Cree fashion designer from Saskatchewan’s George Gordon First Nation. Bitternose designs jackets from Pendleton blankets, another highly prized wool blanket, but says she’s holding off on using an HBC blanket. “Knowing the history and the controversy it causes, I have not yet made a jacket with the Hudson’s Bay [blanket].” Her designs, which have hit runways in New York City, include two jackets made from Pendleton’s Glacier Print blankets—a pattern similar to the HBC point blankets. Those jackets, she says, received a lot of negative feedback from the Indigenous community because of that resemblance. “There’s still a lot of hurt feelings out there.”

To understand why HBC’s blanket, and by extension toys like the new HBC Barbie, upset some Indigenous people, it helps to understand the role that the trading of blankets between early Europeans and Indigenous populations played in spreading smallpox. Over time, and possibly unfairly, HBC blankets have become associated with the epidemics that decimated First Nations populations. In a notorious series of letters from the 1763 Pontiac Uprising in Fort Pitt, Penn., Gen. Jeffrey Amherst hinted at using blankets infected with smallpox as a means of biological warfare. A journal entry by the commander of militia at the fort confirmed the act had been done, with the hope “it will have the desired effect.”

Elizabeth Fenn, Pulitzer Prize-winning chair of University of Colorado Boulder’s history department and a smallpox expert, says the Fort Pitt story is likely true, but “smallpox was already circulating in the backcountry.” She adds there are oral accounts of this happening elsewhere, but that there is no documentary evidence.

Still, Bitternose isn’t alone in her protest. In 2009, artist Leah Decter and Anishinaabe curator Jaimie Isaac responded to then-prime minister Stephen Harper’s declaration that Canada had “no history of colonialism” by sewing together HBC blankets for a travelling exhibit. They held “sewing actions” across the country between 2010 and 2016, inviting Indigenous people to etch their stories of colonialism into the fabric. Anishinaabe artist Rebecca Belmore also critiqued the HBC in her 2011 video installation, The Blanket. “Today, this blanket is an object of beauty, a collector’s item … But for many Aboriginal people, I am sure it is still viewed as a trade item that once contained the gift of disease,” Belmore told Canadian Art.

The blankets at Fort Pitt were not HBC blankets, yet because blankets were a staple of the fur trade, and thus colonialism, the colourful ones Canadians have come to know and love have become illustrative of the heinous acts committed against Indigenous people in the name of settlement. But condemning HBC for the incident at Fort Pitt is unfair, Fenn says. “The larger point is that the conditions of colonization, the conditions of the fur trade, helped to spread the disease. Those points remain true.” In fact, Fenn notes, HBC traders sometimes mitigated smallpox infection through quarantine and inoculation programs. After all, the company needed Indigenous people for its trading empire. It’s a point the company once made in remarkably blunt terms in a post on its website, which has since been removed: “As far as Hbc [sic] is concerned, extermination was never a strategy of the Co… Killing them off would be detrimental to business, all questions of morality aside.” Last summer, that explanation was replaced with less jarring language. In an email an HBC spokeswoman said the language in the online FAQ was “inappropriate,” adding that smallpox among First Nations was of “great concern” to traders and HBC “did its best to control the spread of the disease.”

James Daschuk, author of Clearing the Plains: Disease, Politics of Starvation, and the Loss of Aboriginal Life, agrees that fur companies valued Indigenous people as long as the trade remained profitable. But, “as soon as the fur trade was done, the world system was done with those people,” he says. “Their product no longer had value, and the people no longer had value.”

The history between fur traders and Indigenous people is long, and the relationship complex, but the Barbie—which Daschuk aptly describes as urbane, with her blonde hair under a knit toque, her blue eyes hidden behind hipster glasses, and a Hudson’s Bay Times newspaper tucked into her leather bag—makes no hints at either this history or relationship. Adds Fenn: “There’s something disturbing about that figure. Fur trade chic? Yep. Colonial chic? It’s really disturbing.”