A cold day: The ice bucket challenge, one year later 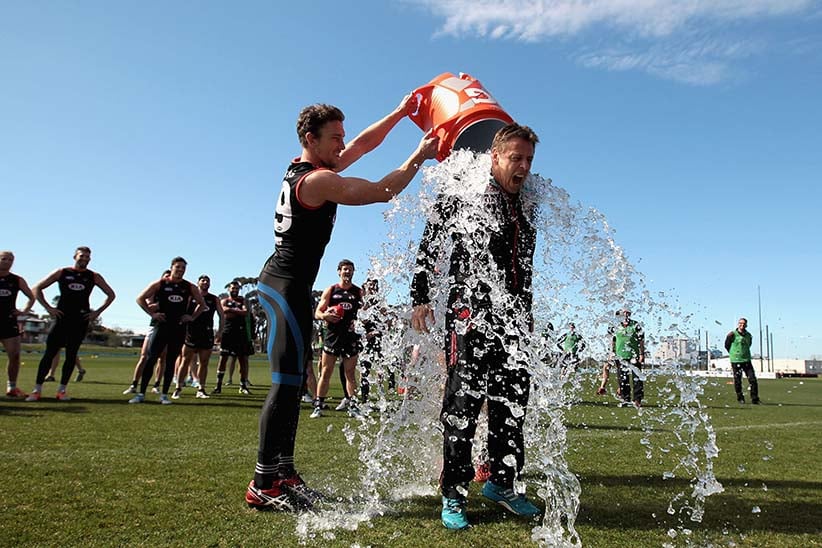 Judy Starritt used to be quite the talker. In the summer of 2013, however, she noticed her tongue began to swell and her speech would slur. Several doctors’ appointments and an MRI later, they figured out what was wrong. In March 2014, Starritt was told she has amyotrophic lateral sclerosis, commonly known as ALS, a neuromuscular disease in which nerve cells die, paralyzing muscle movements like walking and talking. Today, her voice barely registers as a whisper.

When walking through the airport, however, she’ll quickly chat with strangers about last summer’s ice bucket challenge and ask if they know someone who has ALS. If they say they don’t, she’ll respond, “you do now!” And then she’ll thank them.

Those living with ALS have already seen tangible benefits with the money stemming from last year’s viral craze. Starritt sleeps with a bilevel positive airway pressure machine, also known as a BiPAP, to help with her breathing and give her diaphragm a little rest. During the day, a Cough Assist helps keep secretions, like mucus, clear from her lungs. Each machine costs about $5,000, and Starritt is thankful these two items won’t have to come out of her own pocketbook. She borrowed both indefinitely from the ALS Society of Nova Scotia and New Brunswick, which recently added five BiPAP and five Cough Assist machines with ice bucket funds. “You just sign a piece of paper and it’s yours for as long as you need it,” Starritt says.

A year later, ALS Canada doesn’t want to let all the awareness simply dry up and disappear. On August 6th, groups across Canada will celebrate the one-year anniversary of the ice bucket challenge by asking people to dump cold water on their heads once again, and maybe think about donating once again.

Related: What happened to the money from the ice bucket challenge?

ALS is extremely expensive for the roughly 3,000 Canadians living with the disease. Homes and vehicles need to be retrofitted to make them wheelchair accessible. Special speakers are purchased to help amplify ones voice. Personal care workers are often brought aboard. The average cost to a Canadian family with a member diagnosed with ALS can be $150,000 to $250,000, according to ALS Canada. And for the 1,000 Canadian diagnosed annually, there is no cure or treatment.

“I walked in for a medical appointment and I walked out with two to three years to live,” says Carol Skinner, who was diagnosed with ALS in September 2013 at the age of 41. She and her husband moved out of their Ottawa condo and into another apartment that was more accessible for her deteriorating condition. She stopped working as an art therapist with the Canadian Mental Health Association. She used to love skating the Rideau Canal; soon she could barely walk around the block. It was lonely feeling. But in the summer of 2014 when the Ice Bucket Challenge started to take off, her mindset changed. “All of a sudden, I felt the world had my back,” she says. From her local ALS support worker, Skinner is currently borrowing a wheelchair and a shower pole, which allows her to still get in and out of the shower independently. More importantly, she felt like people cared.

When the Ice Bucket Challenge craze started to wind down in Canada last year, members from various ALS groups across the country had to figure out what to do with a $17 million windfall of money. “When people dumped water on their head, were they thinking 100 per cent of the money should go to research or were they saying it should go for wheelchairs and equipment?” asks Lorne Zinman, a neurologist and director of the ALS Clinic at Sunnybrook hospital in Toronto.

The answer, they reasoned, is a mix of the two. Each province pooled together a total of $10 million for research, an amount that was matched dollar for dollar by the not-for-profit neuroscience research organization Brain Canada. The remaining $7 million was split amongst ALS groups from each province, depending on where the donations came in from, for individual care.

In New Brunswick and Nova Scotia alone, the ice bucket challenge raised $775,000, says Kimberly Carter, President and CEO of the ALS Society of New Brunswick and Nova Scotia. The group contributed $415,000 to ALS Canada’s research initiative, while the remaining money is for investments in their equipment loan program. The recent additions of five BiPAP and five Cough Assist machines aren’t just sitting around the office either. “They were gone when we got them,” Carter says. “We had a waiting list.”

Her group also purchased two high-end power wheelchairs that can be controlled by head movements, ideal for when someone is no longer able to use hands or legs to manoeuvre. In total, they’ve spent $100,000 on new equipment thus far while the remaining funds are put aside to ensure the equipment loan program can keep going for years to come, as well as hire care workers. In a first for New Brunswick, Carter hired a full-time client services manager, who checks in with clients on a weekly or monthly basis to customize a care program and help them adapt throughout all the stages of their ALS.

Related: The real problem behind slacktivism

Back in the lab, as much as $10 million of ALS Canada’s $20 million dedicated for research will be made available this year via various grants. “It takes time and the money has to be distributed fairly in a peer-reviewed fashion,” Zinman says. “We’re not going to see changes overnight, but boy will things be forwarded fast with this windfall.” After all, never before has ALS Canada offered more than $2 million in grant money in a single year.

Zinman explains the huge influx of cash has brought forward ideas that researchers previously balked at even attempting—like stem cell transplantation— because they figured trials would be far too expensive for approval. But with the ice bucket challenge money, anything feels possible. ALS Canada has already approved a $500,000 clinical trial for pimozide, in hopes that the anti-psychotic drug proves that it strengthens where motor neurons connect the brain to muscles, thereby allowing muscles to function longer.

“In order to cure a disease, you don’t have to understand 100 per cent of it,” Zinman adds. “You have to understand a certain threshold about why the disease occurs and how it progresses. [With ALS], we’re not at that threshold yet.” But with a few more buckets of ice, maybe they will get there faster.