A middle-aged, out-of-shape man's guide to starting to run

Scott Feschuk takes up jogging, and lives to tell the tale—just barely 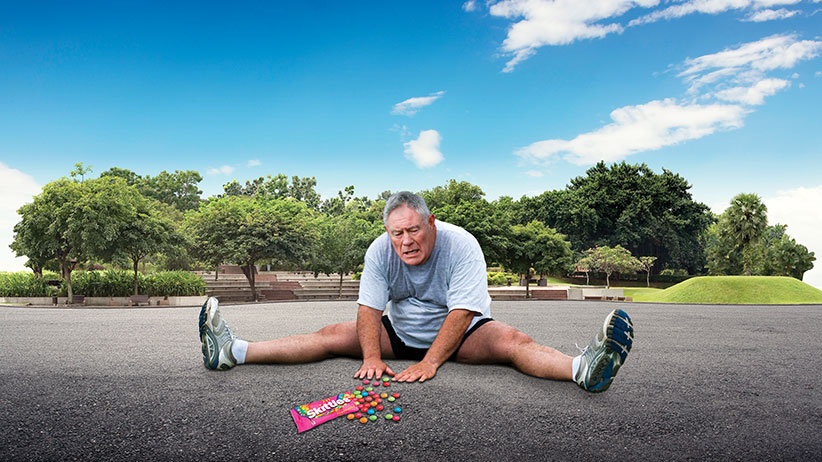 Overweight and nearing 50, I made a decision to take up jogging. I know what you’re thinking: “That’s a terrific idea, Scott. It always goes smoothly when a fat guy suddenly takes up vigorous exercise in the summer heat. Your success is assured and you should get one of those genius grants for being a genius.”

Thank you for thinking that! But it turned out not to be super easy.

Here’s a quick Q & A on the chance you’re either interested in taking up jogging or just hoping I’ll get into details of how one time I looked down while running and got hit in the face by my own boob. (Reminder: I am male.)

How do you know if you’re out of shape?

Your body sends out subtle hints. Do you get winded trying to work your way through a game of pickup hockey or a bag of Skittles? Have you neglected to file your taxes for the past three years because your pen is “upstairs”?

Even then, some people still require a push. I was seeing a doctor—a specialist—for the first time. He launched into a story about a heavy-set friend who worked a desk job, and for breakfast each morning had two big mufﬁns. Turns out the guy developed health problems. I nodded politely. Detecting that the moral of the story had failed to land, the doctor opted for a more direct approach: “You should be less fat.” These were tough words to hear. I was still thinking about them 20 minutes later when I picked up my prescription, and also a Kit Kat.

What’s the best way to get started?

I recommend taking nine or 10 months to decide on a pair of shoes. It makes you seem like a really discerning athlete. You get all the benefits of thinking about running without any of the hassle of going outside.

When you’ve stalled for as long as possible, start jogging at a reasonable pace. A lot of websites recommend a “five and one” plan for running and walking. I became a big fan of this approach. Walking for one minute after jogging for five seconds is a piece of cake. I almost made it!

(I’m kidding, of course. The goal is to run for five minutes then walk for one. Sounded easy. After about two minutes, I began to rethink that belief, on account of how my cardiovascular system was trying to murder me.)

Are there any upsides to jogging?

Distance runners like to tell you about endorphins—the hormones that produce the famous “runner’s high.” Some people get a rush from running. They find it almost addictive.

Alas, not every body works the same way. My endorphins, for instance, seem capable of producing only a tremendous stream of profanity. While running, I swear under my breath. I swear out loud. I curse up slopes and down slopes alike. For reasons I don’t fully understand, I have said some truly awful things about Sebastian Coe. Once, a cute little chipmunk darted across my path. I told it to f-off.

On the upside, the swearing does make me feel a little better, so: good job, endorphins!

What’s it like being part of the running community?

Here’s something I learned: Joggers who share a pathway will often acknowledge one another with a wave or a friendly hello. It’s a nice gesture.

I, however, tend to attract a different kind of greeting. I’d describe it as a look of outright alarm. I don’t resemble the typical jogger. I don’t fit into their frame of reference. They hear my wheezing, they see my pained expression—their first impulse is to check to see if I am fleeing something that I find terrifying, like a wolf pack or a salad. Only after a moment do they make eye contact with an expression that says, “I will notify your next of kin when I come across your body on my way back.”

Are you making any progress?

I aspire to be one of those crazy-fit people who can hold a conversation while running. (Currently, I am limited to sporadic nodding and vulgar hand gestures.) Recently, a friend passed me on his bike and shouted out, “Hey, Scott, how’s it going?” After a deep and laboured intake of breath, this was my shouted response: “Guh!” I almost managed to say “Good!” A couple more months and I’ll be using multisyllabic swear words.