Bringing mindfulness to the school curriculum

More and more kids across Canada are learning meditation techniques. Not everyone thinks it’s a good use of time. 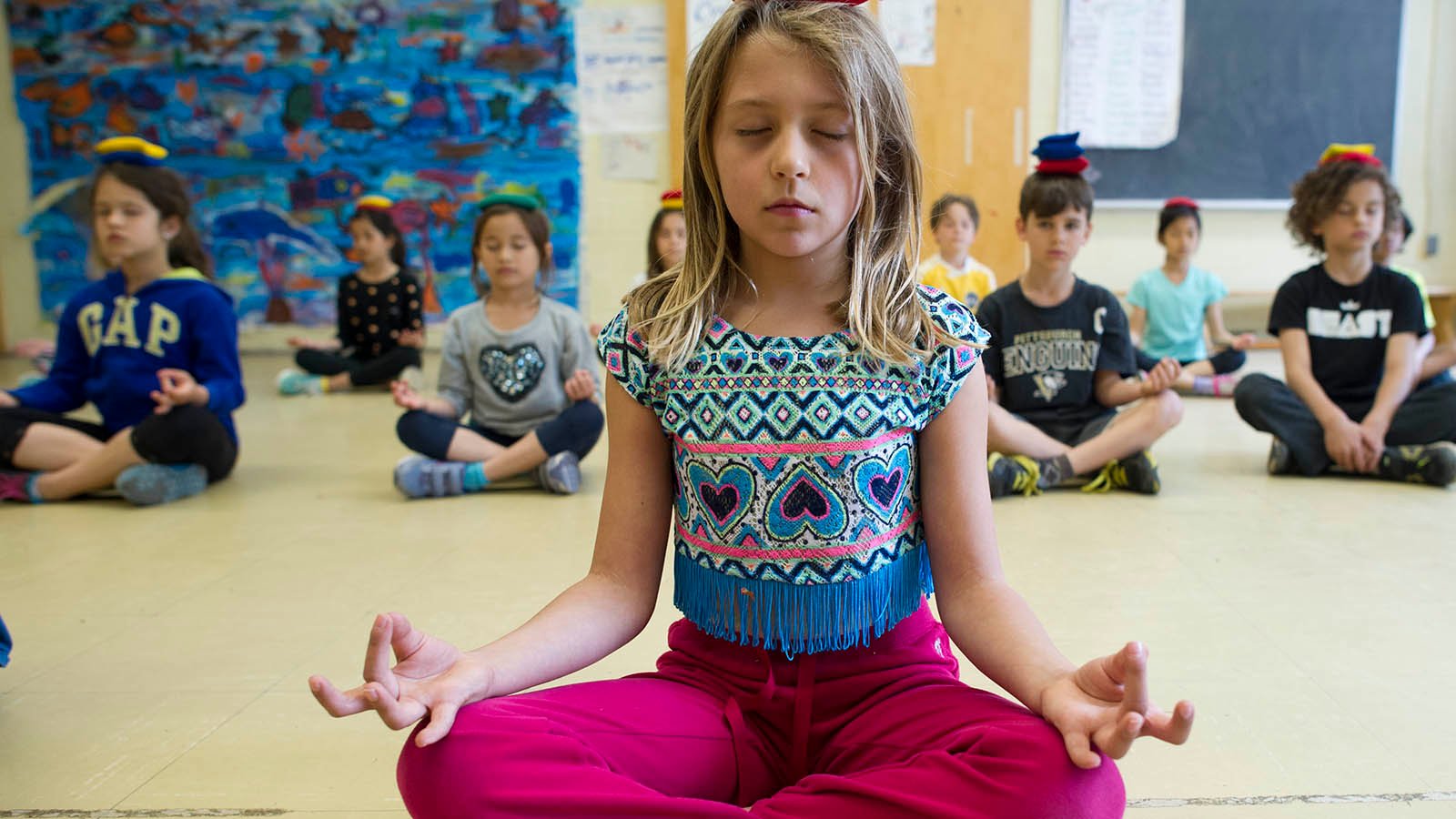 Aliza Naqvi, a 14-year-old student at Dr. Norman Bethune Collegiate Institute in Toronto, carries a key chain strung with seven coloured beads. When she’s feeling stressed or anxious, she can pull it out as a reminder: The first bead, which is blue, stands for “breathe.” The second, red, cues her to reflect on her thoughts; yellow is to consider her emotions, and so on. “At any school, there’s a lot of stress involved,” Naqvi says. “The expectations are really high.” This small token, which fits in her pocket or handbag, reminds her to “take a mindful breath, and to be a little more stable.”

This year, Bethune, which is part of the Toronto District School Board (TDSB), introduced lessons in mindfulness—a type of meditation that encourages awareness of the present moment, in a non-judgmental way—to all of its 200 Grade 9 students, including Naqvi. In six workshops over a two-month period, led by the school’s own teachers, students practised breathing, “body scans” (a meditation exercise that draws attention to different parts of the body), and learned to “surf the wave” of difficult emotions, like anger or anxiety, as Naqvi puts it. The program at Bethune—where one-third of all students have lived in Canada for less than five years—grew out of concern that students faced “a great deal of pressure,” says principal Sandy Kaskens. Surveys showed they had “high expectations of themselves, and their social and emotional well-being was low.” Naqvi admits she was skeptical in the beginning, as were her classmates. That first session, “a lot of people were giggling,” she says. But she was won over, as were her parents, who “realize how much stress we go through.”

According to Kaskens, the response was overwhelmingly positive. This fall’s Grade 9 class will benefit from the same lessons in mindfulness—a practice that’s spreading to schools across the country, even at the elementary level. At Vancouver’s Renfrew Community Elementary School, for example, students begin their day by heading outside to do tai chi, and school assemblies kick off with a mindful breathing exercise. “There are 415 kids in a gym,” says principal Hugh Blackman, “and you can hear a pin drop.”

Entire school boards are adopting similar programs. The Vancouver School District, which includes Renfrew, offers mindfulness training to teachers through the MindUp program, which include classroom “brain breaks” three times daily. The Toronto Catholic District School Board also runs mindfulness sessions for teachers, focusing on those who deal with vulnerable and special needs kids. There are signs the movement is growing further yet. In August, the U.K.-based Mindfulness in Schools Project, which trains teachers across Europe, will offer its first-ever Canadian teacher-training course in Ottawa, with another to follow shortly after in Vancouver. Soon enough, kids across Canada might be practising deep breaths and body scans alongside their math and English homework. Still, not everyone is onside: Some parents (and teachers) worry the practice of meditation is akin to bringing religion into schools—or simply that time in the classroom could be better spent.

Mindfulness, a non-religious meditation practice with roots in Buddhism, has been taught to everyone from medical patients to prison inmates in Canada. There’s a growing body of evidence to back it up, at least among adult practitioners. A 2013 study from the University of Calgary found that it could help breast cancer patients cope with diagnosis, perhaps because it encouraged them to accept the news without jumping to conclusions or getting bogged down in negative thoughts. In 2010, researchers at the Centre for Addiction and Mental Health in Toronto concluded that, when it comes to warding off a relapse into major depression, mindfulness is as effective as medication. Brain-scan studies in adults have shown that a regular practice brings about changes in the brain, positively affecting regions associated with memory, sense of self, empathy and stress.

But when it comes to meditation’s impact on the child or adolescent brain, “there hasn’t been a single [brain scan] study,” says Brown University neuroscientist Willoughby Britton. “We have no idea what’s happening, but we can make some educated guesses.” As we pay attention, areas in the prefrontal cortex—which is responsible for higher thinking and self-control—activate, she says; this region is underdeveloped in kids (it continues to develop well into our twenties). Mindfulness seems to engage these parts of the brain.

Teaching this skill set in schools is relatively new, and controversial, not only because research exploring its impact on kids and teens has lagged. “People connect meditation with religion,” explains Jack Miller, a professor at the University of Toronto’s Ontario Institute for Studies in Education, who instructs teachers on how to use mindfulness in classrooms. In the U.S., where even school yoga practice has raised eyebrows, it’s been especially problematic. Last year, a mindfulness program at an Ohio elementary school was shut down amid a flurry of parent complaints, partly over perceived overtones of Eastern religion. Not only that: “They were taking valuable time away from education to put students in a room of darkness to lie on their backs,” one mother of three kids complained to a local newspaper.

In Vermont, where mindfulness programs are now available in some elementary and high schools, “we worked the most on language,” says Marilyn Neagley, director of the Talk About Wellness initiative, which teaches self-calming skills to school-age kids. “When we say ‘mindfulness,’ we feel it’s safer than saying ‘meditation,’ ” whereas yoga is often simply referred to as “stretching,” adds Neagley, who was instrumental to introducing these programs across the state. (In Canada, this has been less of an issue: At Bethune, teachers use a Tibetan singing bowl to sound the beginning of mindfulness practice, whereas U.S. teachers have been encouraged to use “secular” chimes.) The main objection Neagley runs into isn’t from parents. It’s from teachers, who say they’re already too busy: “I can’t do one more program.”

At Bethune, last November, interested teachers started practising mindfulness together over the lunch hour; after a full day of training in January, they launched student workshops a month later. “It’s become really clear that if you want to do this in schools, you have to start with teachers,” says Willem Kuyken, professor of clinical psychology at the University of Exeter, who has studied mindfulness programs in U.K. schools, where they’re more established. “The teacher needs to embody the qualities [of mindfulness] they’re trying to teach.”

Jon Gold, who teaches seventh- and eighth- grade history at Moses Brown School in Providence, R.I., has been practising mindfulness for years. He starts each class by ringing a bell, closing his eyes and inviting students to join him in silent meditation. “Once in a while, I’d give the hairy eyeball to a kid,” he says, “but they came to value that time. They felt calmer and better able to focus.” Gold collaborated on a new study in the Journal of School Psychology, which randomized Grade 6 students into two groups: One took an Asian history course with a daily mindfulness exercise, and the other an African history course with another activity (instead of meditating, they built a life-size Egyptian mummy). According to the study’s lead author, Brown University’s Britton, both groups saw benefits on anxiety and depression, suggesting that experiential activity in school can support kids’ mental health; the young meditators were also significantly less likely to develop suicidal ideation, or thoughts of self-harm.

More studies are beginning to explore the impact of mindfulness on kids and teens. In the U.K., a 2013 paper found that 10- and 11-year-olds who participated in an eight-week program were better able to ignore distractions. Another found that 12-to-16-year-old students had fewer symptoms of stress and depression. “The effect became larger at the most challenging time of the school year, during the end-of-year exams,” says Exeter’s Kuyken, the lead author. Some research has suggested that mindfulness can help children and adults cope with attention deficit hyperactivity disorder, maybe offering an alternative (at least for some) to medication. As far as the effects of mindfulness on the youngest kids, though, “that’s pretty much an evidence-free zone,” Kuyken continues. The programs now sprouting up at elementary schools in Canada, the U.S. and the U.K. will be a boon to researchers, who wish to explore the effects of meditation on the young mind.

Since the mindfulness sessions at Bethune came to a close, Naqvi finds herself drawing on lessons they learned. In times of stress, she says, it helps her understand “it’s okay, everyone feels the same way. Taking a deep breath makes you feel more confident, and ready for what you’re about to do.”