Volunteers at pop-up test sites, restaurants asking for a stop to in-person dining. Nova Scotians have rallied to bring the second wave under control. 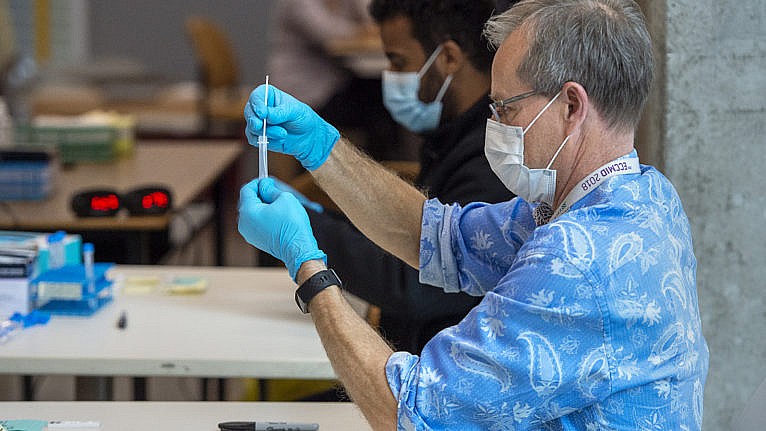 A nasal sample is processed at a pop-up COVID-19 testing site on the Dalhousie University campus in Halifax on Wednesday, Nov. 25 2020. THE CANADIAN PRESS/Andrew Vaughan

On Nov. 22, Dr. Lisa Barrett was standing in a closed nightclub in Halifax at the province’s first rapid testing pop-up site (also believed to be the first in Canada). Barrett, an infectious diseases researcher at Dalhousie University, and her colleagues “went out to test people who are low risk,” she told Maclean’s. The pop-up clinics, which have taken place in Halifax, Wolfville and Dartmouth, are designed to produce test results within hours without using overworked provincial labs and are aimed at finding people who aren’t displaying any symptoms yet, and who, if positive, could be unknowingly spreading infection to others.

To lessen the stigma of being tested, the team turned it into a community effort, training 80 local volunteers to do the swabbing and testing at the rapid test clinics (though with medical oversight). “I want to contribute,” is a refrain Barrett heard as she walked the lines of those waiting to be tested at the pop-up clinics.

The rapid antigen test isn’t perfect. It’s less sensitive than the more common PCR test, and so it is less likely to pick up people with low viral loads, Barrett explains. So, along with the quick results is an explanation that those tested are “Neg for the night”—in other words, they could be positive the next day. To make the process as easy as possible, the clinics don’t require health cards. Volunteers ask for a name and phone number or email address, so that the clinic or public health agency can be in touch if there’s a positive result. As of Monday, Barrett said pop-up clinics had tested 5,500 people and found 21 positives from the rapid tests. Those who tested positive can come back into a special line at the same location for a more sensitive PCR test, with results in less than 24 hours. With this double-checking, there have only been around 12 confirmed positives, Barrett says.

The pop-up sites are one example of why, as the COVID-19 situation worsens day by day in Central and Western Canada, the current outbreak in Nova Scotia appears to have stabilized. On Wednesday, Nova Scotia announced 17 new cases, bringing its five-day tally to 67 cases, down from 86 in the previous five days. As well, the province has no COVID-19 patients in hospital.

“In a word, I think Nova Scotia is handling its current challenges magnificently,” states Dr. David Fisman, a professor of epidemiology at the Dalla Lana School of Public Health at the University of Toronto, said in an email to Maclean’s.

This autumn, the residents and governments of Atlantic Canada hoped that all the public measures they’d put in place—including 14-day quarantines for virtually everyone entering their region—would protect the Atlantic Bubble from the worst of the second wave. But they also knew that even the highest barriers could be overtopped. In September, the four provinces reported 32 cases. In October, another 186 cases were identified in the Atlantic Bubble. Then, in November, the numbers really started surging, albeit by regional standards, especially in New Brunswick and Nova Scotia. On Nov. 23, the Bubble officially burst as all four premiers warned against non-essential travel within Atlantic Canada.

In the first 20 days of November, Nova Scotia added 51 cases. Since then, it’s averaged 14 new cases a day. To date, its highest rate of new cases in the second wave has been 16.8 a day per million population at the end of November, well below its peak of 36.2 during the first wave.

Those numbers may sound tiny compared to the data coming out of the rest of Canada, but what wasn’t small was the province’s reaction. On Nov. 9, Nova Scotia toughened self-isolation requirements for those hosting non-essential visitors from outside the Bubble. It closed schools linked to COVID-19 cases. On Nov. 20, as the province reported five cases, it tightened rules in the Halifax area. “COVID is a social virus—it likes social contact because that’s how it spreads. COVID-19 flourishes in close-contact settings,” explained Dr. Robert Strang, the province’s chief medical officer of health. He lowered private social gathering numbers to five people indoors and 25 outdoors.

The long lines at rapid testing clinics weren’t the only signs of community acceptance of measures designed to stop the second wave. On Nov. 24, two days after Barrett’s first pop-up clinic, the Restaurant Association of Nova Scotia voted to ask the government to shutter restaurants and bars to in-person eating. Consumer confidence had already been so “wiped out” because bars and restaurants were the sites of growing numbers of COVID-19 cases, explained executive director Gordon Stewart. “Business has taken a sharp decline. But it’s more than that—it’s that we’re scared that the spread gets so bad that we end up like some of the Western provinces right now,” he told the CBC. A few hours later, as Dr. Strang announced 37 new cases, he called for a halt to in-person eating, and closed gyms, casinos, museums and other gathering spots.

RELATED: ICUs in Alberta are drowning, say doctors. ‘I’ve never had this happen in all my years of practice’

In response, Waye Mason, the city councillor for District 7 in downtown Halifax, which has lots of restaurants and bars, took to Twitter to say, “Thank you, Dr. Strang & Premier for responding to D7 resident’s [sic] concerns!”

“The response to current community outbreaks including proactive school closure, widespread use of rapid tests, superb public health messaging and publishing lists of exposure sites so people know they’re at risk are all notable,” explains Fisman. “I think there are a lot of lessons from Nova Scotia: their numbers are low because of what they’re doing.”

The provincial government has found creative ways to engage the public. “Nova Scotians are a social bunch. It’s hard to be apart,” says a tweet from the province featuring a video of how a dating couple can still “make out” in a distanced world. “So thank you for staying home, following health advice, and looking out for one another. #TheSoonerWeDo.”

Nova Scotians are a social bunch. It’s hard to be apart. So thank you for staying home, following health advice, and looking out for one another. #TheSoonerWeDo

Last week, Dr. Strang even showed up at the home of a young fan, Hughie Dauphinee, age seven, who, like Strang, was born with a cleft lip and palate. After they each sanitized their hands, Strang gave Hughie a gift, a plush toy shaped like the COVID-19 virus and then they chatted on the porch about their surgeries. “I reacted [by] bouncing off the walls because he has a cleft lip and palate and he’s keeping Nova Scotia safe,” Hughie told CBC News.

Nova Scotia isn’t alone in waging an all-out war to reduce caseloads back to an occasional ripple. New Brunswick has repeatedly snapped regions within its own province back into tighter public health levels whenever outbreaks were detected. It now has half of its health regions, including Moncton, Fredericton and Saint John in the province’s orange level, while the rest of the province is in the less restrictive yellow level. It also ramps up testing and contact tracing. On Dec. 1, Dr. Jennifer Russell, chief medical officer of health, announced that an evening event held at two venues in Saint John was the source of more than 80 per cent of recent infections in that zone, or some 60 cases. It turns out that one of the people who attended was either asymptomatic or pre-symptomatic.

Because of such intense contact tracing throughout Atlantic Canada, the provinces have been able to suppress community spread; it only accounts for three per cent of all confirmed cases in New Brunswick.

If the number of new cases continues to subside, the question is whether Atlantic Canada will be able to re-establish its internal travel bubble. “I do think the Atlantic bubble will be able to reconstitute, but I don’t think there’s a need to rush it,” Fisman says. As the news continues to be grim in the rest of Canada, the signs of progress in Atlantic Canada are comforting to the epidemiologist: “It’s really great. First signs of light starting to appear.”