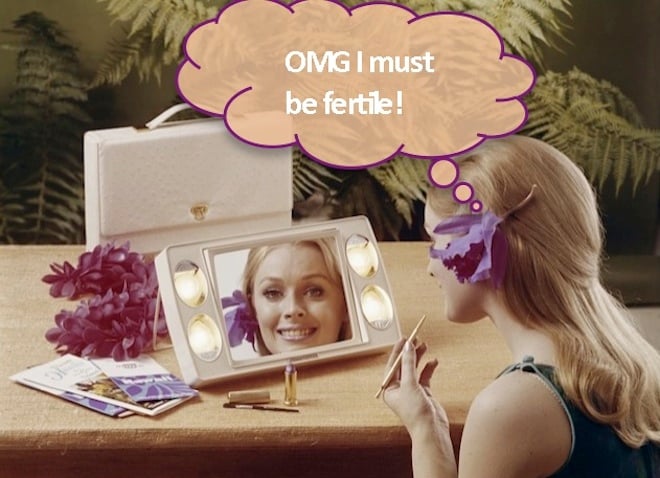 A woman’s menstrual cycle can affect her weight, mood and willingness to openly yell, “Oh, my God, does anyone have a tampon!?” in a bathroom when caught without one. But it turns out that it may affect other aspects of her life, too.

According to a new study from Concordia University, the menstrual cycle can affect other aspects of life too, specifically how you consume everything from clothing to burgers.

The study comes from Concordia’s Research Chair in Evolutionary Behavioral Sciences and Darwinian Consumption, Gad Saad, and his doctoral student and co-author, Eric Stenstrom. Gaad is also the author of The Evolutionary Bases of Consumption.

Fifty-nine female participants were chosen and over 35 days, they kept detailed diaries on their clothing choices, calorie consumption, purchases, and “beautification behaviors,” including attention paid to hair and makeup.

The study analyzed the daily responses to survey items, including when each participant wore clothes that attracted sexual attention, how long she spent making herself beautiful, and whether she ate food high in calories. The researchers found that there was an increase in appearance-related behaviors during the fertile days of a woman’s cycle.

The infertile phase, however, is when the women in the study peaked in their craving and consumption of high-calorie foods, not to mention peaking in their food purchases.

Finally, research that shows us what many women would attest to from their own experience.

But the researchers offer a more scientific explanation for these behaviors than the generic “I’m on my period so it’s okay that I put this entire pizza in my mouth.”

Although this may make women feel like a slave to evolutionary desires (or give us a perfectly good reason to buy self-tanners and French fries), Saad says it could lead to consumption-related apps for women. For example, if a woman’s iPhone alerts her that she shouldn’t go grocery shopping since she’s on day 23 of her cycle, she’ll be aware of how her biology affects her consumption.

Another possible advantage: a scientific excuse to eat everything for a week out of every 28 days. Not that one was really needed anyway.