Coronavirus in Canada: These charts show how our fight to 'flatten the curve' is going

COVID-19 is playing out quite differently in Ontario and Quebec compared to the rest of Canada, and within those two provinces, the crisis is at its worst in the two largest cities—Toronto and Montreal

The data show that Canada’s COVID-19 pandemic is looking more and more like an Ontario and Quebec problem, with the rest of the nation playing a peripheral role. For the first half of the month, much of the focus was on Quebec, which has the highest daily totals of any province—an average of 834 each day from May 1 to 15, excluding a spike of 2,203 cases on May 3 when older missing cases were added to the daily tally. Quebec’s high numbers are due to its deadly outbreaks in long-term care facilities, as well as community spread in the greater Montreal region. During that time, Quebec accounted for an average of 63 per cent of all new cases in Canada. In contrast, Ontario had 398 new cases each day for the same May 1 to 15 period, representing an average of 29 per cent of Canada’s cases, while the rest of the nation had only eight per cent of the cases.

The reason for the upswing in Ontario’s cases appears to be people relaxing their social distancing routines. “Our analysis thus far suggests that people may have acquired the virus during recent events where people traditionally spend time with their families, like Mother’s Day,” said Dr. Eileen de Villa, Toronto’s medical officer of health, at the end of last week.

The bad numbers meant that Ontario added nearly 3,000 cases to its cumulative tally in the week ending on May 24. Of all the new infections reported in Canada during that same seven days, Ontario accounted for 38 per cent.

And if Ontario and Quebec are the twin epicentres of Canada’s COVID-19 crisis, then the Toronto and Montreal areas are the epicentres of the epicentres. Greater Montreal alone accounts for half of all cases in Quebec to date, while the Greater Toronto Area (GTA) accounts for more than two-thirds of Ontario’s cases. In addition, Montreal and the GTA account for the same proportion of deaths in their provinces: 64 per cent. 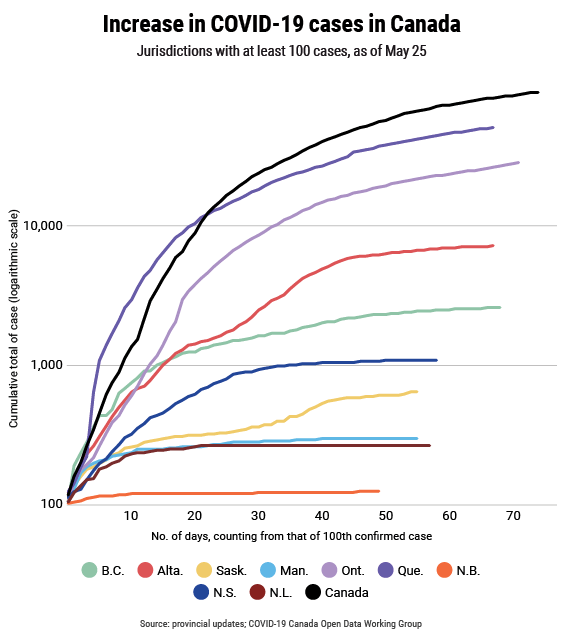 For all the new bad news, there are glimmers of good news. The growth in death tolls in each region has been slowing for the last few weeks. In the GTA, the drop off has been sharp. It recorded 129 deaths for the week that ended on May 23, compared with 288 deaths two weeks before that. The next day, Ontario expanded its testing criteria: everyone in high-risk groups, such as taxi drivers, grocery store workers and first responders, can get tested even if they have no symptoms.

Why use percentage charts: By looking at the percentage change in cases, it’s easier to see trends that are not apparent in raw numbers. Daily increases can fluctuate wildly—such as when Quebec combined its confirmed and probable cases into one number on March 24, which resulted in a one-day spike of nearly 800 cases. So, to help see shifts without the graphic “noise” generated by these daily fluctuations, we’ve used a method called a rolling (or moving) average, which compares percentage changes between seven-day averages, to smooth the lines for each jurisdiction and allow trends to be more readily apparent. 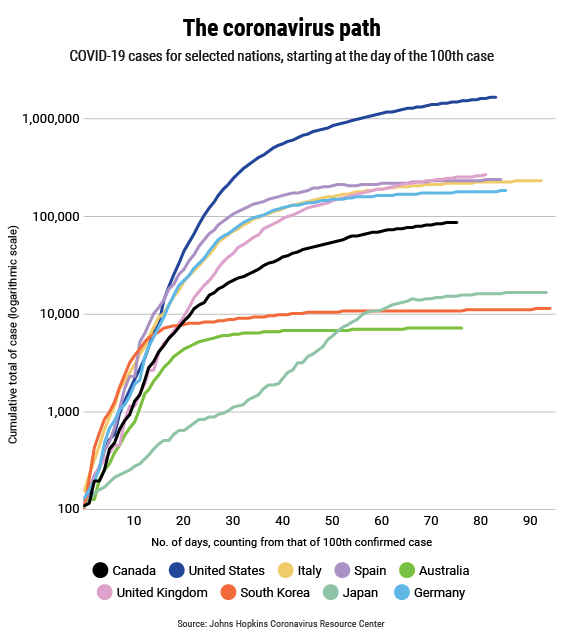 Why use logarithmic charts: COVID-19 is increasing at an exponential pace, which can overwhelm normal linear charts. In contrast, overall trends are apparent when compared using a logarithmic chart. To explain his popular COVID-19 logarithmic charts on the Financial Times website, data expert John Burn-Murdoch has this handy explanation: the space between 100 and 1,000 is the same as the space between 1,000 and 10,000, because exponential increases means it takes the same amount of time to go between those two milestones. That allows readers to easily see if jurisdictions are following the same path or doing better or worse.