The unsung heroes of the battle against COVID-19 work gruelling hours while placing themselves in danger. Then they're forced to isolation and—in some cases—shunned. 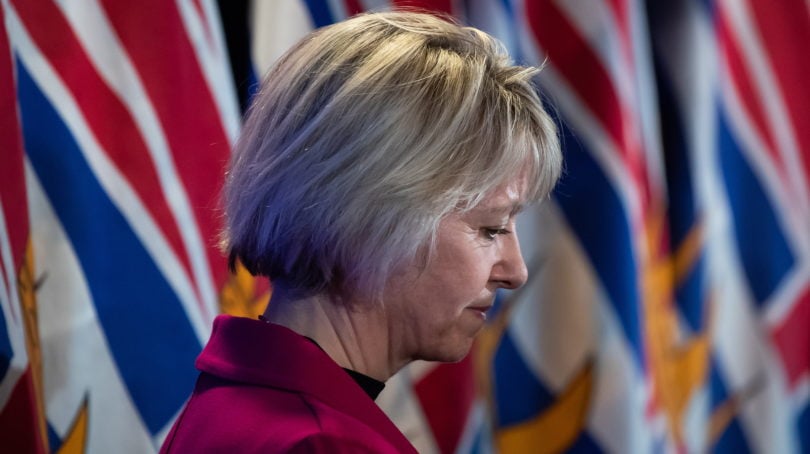 Dr. Bonnie Henry listens during a news conference on Friday about the provincial response to the coronavirus (Darryl Dyck/CP)

When British Columbia’s chief public health officer, Dr. Bonnie Henry, shed a few tears during a press conference this weekend, she reminded all of us that there are living, breathing, feeling human beings behind the effort to stymie the spread of the novel coronavirus in Canada.

“I just know how stressful it is for our health-care system, for my colleagues and for the families that are dealing with this,” Henry told reporters on Saturday, articulate and resolute despite being visibly affected by the challenges of the past few weeks. “It’s a very difficult time.”

She is human. We are all human. We all touch our faces too often, damn it, and need to be instructed not to (it helps prevent infection). So while we go about our days trying to avoid scratching our noses and nervously refreshing our various online COVID-19 trackers—at the time of writing, there are 74 confirmed cases in Canada—let us spare a thought for those at the front lines of what looks like an impending crisis.

Understanding and limiting the effects of a potential outbreak on health-care workers is “hugely important” and should be prioritized before COVID-19 becomes more widespread, said Steven Taylor, a University of B.C. professor who recently penned a book titled The Psychology of Pandemics.

“Health-care workers face a number of particular stresses, including the risk of getting sick and overwork,” Taylor said in an interview. And, not insignificantly, “they might see more dead people than the rest of us.”

Daniel Fontaine, chief executive officer of the BC Care Providers Association, spoke with Maclean’s Monday afternoon. It was a couple of hours after public health officials confirmed the country’s first COVID-19-related death at a nursing home in North Vancouver.

To put it mildly, he was having a busy day.

“It can be a very emotional and very difficult time for all of us, including myself,” said Fontaine. “And we saw that with Dr. Henry, too. You live and breathe this every day.” He called Henry “a superhero without a cape.”

For care workers, death is part of the work, Fontaine said. In B.C., people are into their late 80s, on average, when they enter a long-term care facility, he said. It’s a vulnerable population. Many individuals have compromised immune systems, dementia, Alzheimer’s or other conditions. Care workers often develop close relationships with them and their families. Every day has the potential to be mentally and emotionally taxing, even if there’s no crisis on the horizon.

The regular flu season adds an extra layer of stress, Fontaine said, because workers know an influenza outbreak can already be “incredibly deadly” in the population they care for. COVID-19, deadlier than the flu, adds new tasks and pressures to the day-to-day. Workers are spending more of their time doing “enhanced cleaning,” reassuring anxious family members and monitoring the supply of now-hard-to-replenish goods such as surgical masks.

In a normal year, facilities will put a box of surgical masks by the front desk in case visitors want to use them. Not anymore. “I’m getting reports from our members and beyond that the boxes are disappearing. The masks are gone and we just don’t have enough to be able to hand them out,” said Fontaine.

It’s a nerve-wracking situation all around. “This is the first time we’ve really experienced anything like this,” he says. Neither he nor most of his staff, mainly young people, were active in the field during the SARS crisis in 2003. They have no frame of reference.

RELATED: The economics of the toilet paper panic—and why more stockpiling is inevitable

Taylor does. He called up examples from the height of the SARS epidemic to explain why stress management for health care workers is so vital.

During that time, health care workers “were instructed not to go out and socialize, to leave the ward and go straight home and be in self-isolation there,” he said. “We already know that quarantine is stressful. It can be particularly stressful in health-care workers. They’re being placed in a dual role.”

In the coming weeks and months there is also the potential for ostracism. “They will be discriminated against, just like people of Chinese ancestry have been discriminated against in the early parts of COVID-19,” Taylor said. “To some extent health care workers will be avoided and shunned and so will their family members and children. This happened during SARS.”

All of that stress can lead to an increase in absenteeism and burnout, he said, which can put a strain on the health-care system.

There is already a nursing shortage, explained Christine Sorensen, president of the BC Nurses’ Union. In B.C., nurses worked about two million hours of overtime in the 2018-19 year, she said. “Nurses are already exhausted.”

Then there are concerns about whether there will be enough protective gear for workers to protect themselves while they’re at work. And there is the likelihood that nurses will bear the brunt of frustrations from an anxious public crowding the nation’s emergency rooms.

RELATED: Canada needs a coronavirus stimulus plan. Here’s what it should look like.

“It’s a challenging time. Nurses are very committed, empathetic professionals who often are putting their lives at risk every day,” said Sorensen. “They need the support of the public. They need the support of their family and friends, to talk about something other than COVID and their patients. That helps them emotionally recover. Life does go on, and there needs to be a life outside of the health-care system.”

(To borrow the phrasing of a cultural icon, RuPaul, if you can’t take care of yourself, how in the hell are you going to take care of somebody else?)

Some health workers do their heavy lifting without wearing scrubs. Sorensen herself is a longtime public health nurse. Public health teams are “often the unsung heroes of the health-care system,” she said, because they’re the ones tasked with doing the grunt work to prevent large outbreaks: interviewing patients, getting their contact histories, mapping out where they’ve been, finding those who might be at risk.