Coronavirus: What Canadians need to know

We have updates and answers to key questions, as the first cases in Canada and mass quarantines in China fuel fears of a global outbreak 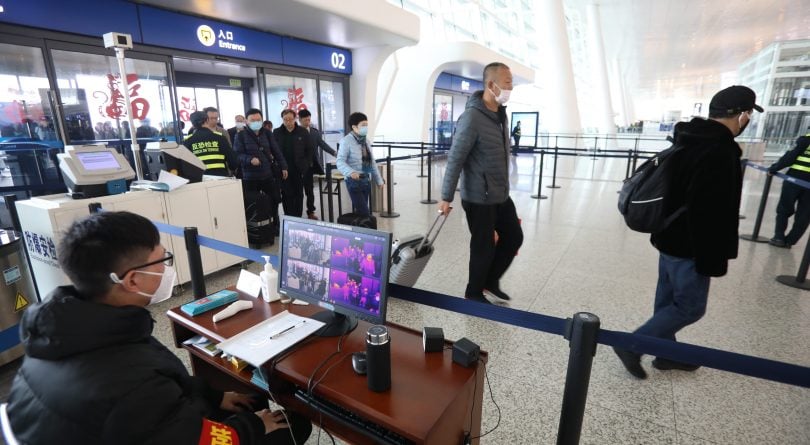 Staff take passengers' body temperature at Tianhe International Airport in Wuhan, China, the location where the coronavirus was first detected (Xiao Yijiu/Xinhua via ZUMA and CP)

What we know right now

The new coronavirus—also known as 2019-nCoV—which is believed to have jumped from animals to humans in Wuhan, China, is now spreading among humans, as some people who haven’t visited China are getting sick.

The World Health Organization (WHO) declared the coronavirus outbreak a global health emergency on Jan. 30.

The virus has officially infected more than 7,800 people, most of whom are hospitalized in Wuhan and surrounding cities.

Official Chinese numbers say the virus has killed at least 170 people so far, all of them in China.

On Saturday, health officials announced that the first case in Canada had been discovered in Ontario. The patient is a man in his 50s who had recently travelled to Wuhan. He was said to be in stable condition at Toronto’s Sunnybrook Hospital. On Monday, a second case was announced; the man’s wife has also tested positive. On Jan. 28, a third ‘presumptive’ case was announced, this time in B.C. There may be many more cases to come, as the virus incubates for approximately 10 days before symptoms appear.

As of Friday—in an unprecedented move aimed at slowing the outbreak—China had expanded travel restrictions for up to 50 million people including in 17 cities near the centre of the outbreak. The clampdown began on Wednesday when authorities the quarantined the city of Wuhan, with state media announcing that travel on buses, trains and ferries in the city was suspended, and that flights out of the city were closed to outgoing passengers. Several countries are taking steps to evacuate their citizens from Wuhan.

Cases have also been identified in Germany, France, Thailand, Japan, Taiwan, South Korea, Nepal, Vietnam, Sri Lanka, Australia, the Philippines and as of Friday, there are five reported cases in the U.S.

What is the coronavirus?

2019-nCoV, a coronavirus strain, was first detected in humans in Wuhan in mid-December among a cluster of individuals who showed up at the hospital with coughs, difficulty breathing and fevers. Initially, the cases could all be traced back to a seafood and meat market in Wuhan, where live animals were being sold. This led authorities to conclude the virus had jumped from animals to humans. Scientists suspect that snakes may be the animal, of origin but that has yet to be verified.

Coronaviruses are common in animals and occasionally spread to humans. Most of us have had a coronavirus without realizing it, as they’re usually no more pesky than a common cold. But some coronavirus strains can be deadly, and the elderly and immunocompromised* are most at risk of death. There were a total of 8,098 cases of SARS coronavirus and 774 deaths* worldwide in 2003, and the MERS coronavirus has taken more than 858 lives in sporadic outbreaks since 2012.

What are the symptoms?

Early symptoms are like those for many seasonal viruses and most strains of coronavirus: watch for coughs, fever, shortness of breath, congested breathing, body aches, sore throat or vomiting and diarrhea. The symptoms can take up to 10 days to appear.

If left untreated, however, 2019-nCoV can advance to pneumonia, kidney failure or other complications, which is why it is dangerous to the elderly and people with compromised immune systems.

Why has it caused a global health scare?

In the early days of the virus, 2019-nCoV seemed to only be affecting those who had touched or consumed animals sold at the market, meaning it would be easy to contain.

On Tuesday, however, China confirmed that people have been infected who have not visited the Wuhan market nor consumed food purchased from there. What this means is the virus is now known to be spreading from human to human.

What isn’t known is exactly how easily it can spread. Human-to-human transmission happens if respiratory droplets travel from a sick person to another via breathing, talking, sneezing or coughing in close contact. Public health authorities are concerned by how quickly the number of confirmed cases is rising. Given that there’s a long incubation period, there could be many more currently infected who haven’t shown symptoms yet.

Could it become another SARS?

In terms of fatalities, SARS killed about 10 per cent of those it infected, and 44 of the fatalities were Canadian. Given that only around two per cent of those confirmed to have been infected have died so far, officials think 2019-nCoV isn’t as deadly as SARS. But that could change. Most of those suffering from 2019-nCoV are still in the hospital and aren’t yet in the clear.

The good news is that SARS didn’t spread rapidly in communities, like the flu does. Instead, the spread was largely confined to hospitals and it was containable, once authorities knew what they were dealing with and put screening, testing and quarantine procedures in place. With SARS, the virus wasn’t identified until almost halfway through the outbreak, so this time around, authorities are able to prepare much earlier. Plus, the pandemic control protocols that were being developed on the fly in 2003 are very much in place this time around.

What are health authorities doing about it?

Officials have already developed a diagnostic test for the new virus. Authorities in major Canadian airports are currently asking travellers about their recent travel, and those who have travelled to central China are being asked about symptoms. Efforts may escalate in the coming days. At several major U.S. airports, for instance, authorities are actually screening travellers from Wuhan by checking their temperatures.

Hospitals are also on heightened alert. Frontline staff have been instructed to ask patients with symptoms of the respiratory virus about their previous travel, and to quarantine any suspected cases.

Has it been found in Canada?

Yes. So far, three cases have been announced by public health officials. A man, 50, arrived from Wuhan to Toronto last week, showing mild symptoms on the flight and was tested positive for 2019-nCoV when his condition worsened soon after. His tests have been confirmed by a lab in Winnipeg. His wife is the second case, and her tests have also been confirmed. There was a third presumptive case announced in B.C. Given the rate at which the virus has spread, authorities expect we will have more cases here.

What can you do to avoid coronavirus?

There is currently no vaccine available to protect you against human coronavirus infection, and antibiotics don’t work against viruses.

Many people are buying face masks as precautionary measures, but health officials say there’s no evidence that they can block virus particles small enough to be breathed in.

So far, Canadian officials say that 2019-nCoV poses a “low risk.” But it’s a good idea to take extra precautions when in close quarters with others in an airport, hospital or subway train. The U.S. Centers for Disease Control recommends that you frequently wash your hands with soap and water for at least 20 seconds and avoid touching your eyes, nose or mouth with unwashed hands.

CORRECTION, Jan. 22, 2020: An earlier version of this story misstated the number of deaths caused by SARS. That number has been corrected.