Coronavirus won't hit Alberta as hard as others. But its economic wallop will be brutal.

Data modelling suggests the province is comparatively well-equipped for the onslaught of COVID-19. For the aftermath, there's no good scenario. 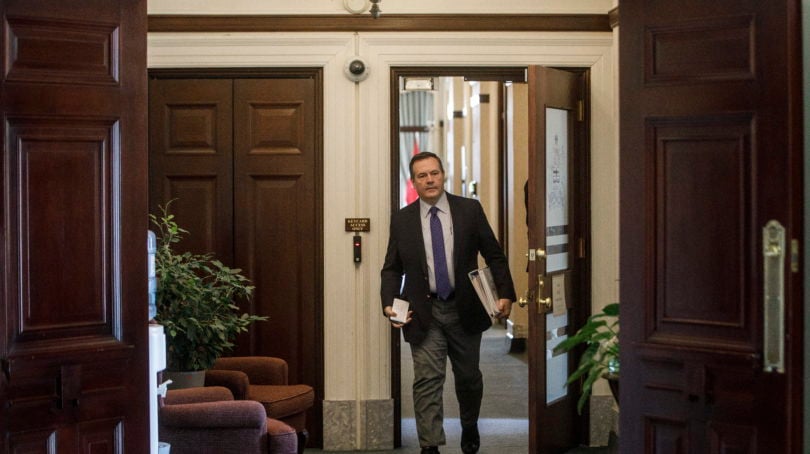 Kenney making his way to the chamber on March 20 as the Alberta legislature passed a series of emergency bills in response to the coronavirus pandemic. (Jason Franson/CP)

So grim is this pandemic that Albertans have been told to hope for a best-case scenario in which the current number of deaths by coronavirus (26) would only—only!—multiply fifteenfold to 400. The grief suffered by dozens of families would spread in coming weeks to hundreds of families. And the projection of 400 would itself multiply if outbreaks hit more seniors’ homes or other vulnerable populations, reaching 3,100 fatalities in Alberta’s “probable” scenario, and more than double even that, if the spread is worse than health officials forecast.

It’s easy to be numbed by these figures, and by the scale of tragedy they present. Premier Jason Kenney’s televised address on Tuesday, in which he previewed the numbers the night before health officials released contextualized data, has already had a sobering, saddening effect on residents. It’s hard for either a politician or a public health officer to foretell so much human loss, but it’s equally important for Albertans to hear this: compared to the hospitalization and fatality rates that other jurisdictions will face, in Canada and abroad, Alberta will emerge from this pandemic relatively well.

Alberta Health officials say that with a huge projected ramp-up in the province’s supply of intensive care beds and ventilators—plus a mass redeployment of medical staff to operate them—the hospital system will comfortably meet projected peak demand in May or early June. That’s even in the bad-case scenario they laid out on Wednesday. Modelling in Ontario and Quebec showed their facilities at risk of being overwhelmed if trends tip much beyond those provinces’ “likely” scenarios, and news feeds are flooded with reports of how bad it’s already gotten in much of the United States and Europe. Kenney says the province could be in a position to send surplus ventilators to other parts of Canada.

Albertans can be comforted, too, that the province’s fatality and hospitalization rates currently track lower than in Canada’s two largest provinces. Alberta’s own current hospitalizations with coronavirus, 44 patients, is substantially below where the province’s own modelling had estimated it would have by April 8. Moreover, Alberta has the highest rate of testing among all provinces—at a per-person rate nearly triple that of Ontario—and top-level case tracing, giving it better confidence of its grasp of the situation than other jurisdictions.

Fuller context, and the opportunity for journalists to ask questions to ensure they understand the data before rebroadcasting it to the public, allows the news media to give nuance to the terrible numbers. That wasn’t on offer when Kenney, unlike premiers in Ontario and Québec, played frontman on Tuesday when it came to releasing the numbers. In fact, minutes after airing the premier’s speech, his office played rapid-fire cleanup to clarify that the alarming projection of 800,000 to a million or more infections in Alberta—far beyond numbers other provinces or even large countries had been talking about in forecasts—actually included that large number of coronavirus cases that will go undetected and lead to mild or unnoticeable symptoms. When the province released is modelling a day later, Kenney again commandeered the slideshow with a heavily ad-libbed, at-times rambling explanation that went on for about 45 minutes before any health official got to the microphone.

The skeptic’s political theory behind Kenney releasing the numbers is that he aims to assert himself as the person in charge, rather than chief medical officer of health Dr. Deena Hinshaw. It’s a compelling inference, I assure you. But there’s something else to the fact that Kenney wanted Albertans to hear these numbers first from him: he intended them to be understood in tandem with another sent of harsh facts: the economic devastation Alberta faces.

Hinshaw could have taken lead on the virus hospitalization projections; only Kenney could speak to those and the terrible recession that will likely emerge in their wake. Because as the dust clears—likely this summer—on the pandemic’s acute impact on public health and distancing, the perfect sandstorm kicked up by the oil crash will come into sharp, terrible focus. Alberta will fare better than other big provinces through the pandemic itself, but its economic ruin will be disproportionately awful and enduring.

Demand for jet fuel and car fuel has cratered, and may take far longer than the crisis itself to recover. And the catastrophe for petroleum producers comes amid a massive surge in supply due to gamesmanship between Saudi Arabia and Russia that sent prices plunging worldwide. Alberta’s bitumen blend—Western Canadian Select—has fallen as low as US$4 a barrel, one-tenth of the price it fetched earlier this year.

A major pipeline executive predicted this week that, with prices this low, one-fifth to one-quarter of Western Canada’s oil production will simply be left in the ground during the second fiscal quarter, so companies avoid absorbing massive losses. Kenney, in his speech, said oil prices could fall even further.

In a speech to the oil industry execs Tuesday, the premier had forecast a record-shattering unemployment rate of 25 per cent in the province—a figure he notably didn’t repeat in his TV speech that evening. That colossal jobless rate would be a mid-pandemic blip that recedes once the forced economic shutdown gets lifted and the service sector gears back up. Still, Alberta will struggle with double-digit unemployment for the year, according to a forecast in late March by RBC Economics, with twice to four times the number of job losses it experienced after the oil crash of 2014 (from which it hadn’t yet recovered).

This is nothing less than a reorganization of the familiar Canadian employment picture of several decades, in which people from Atlantic provinces with double-digit unemployment packed up and moved west to the promised land, where prairies met mountains.

There may be some balm to come, if the Trudeau government can offer the sort quick relief program and credit liquidity oil industry leaders are pleading for. They’re asking for something in the order of $20 billion, and even that won’t likely cushion them from the twin shocks to oil supply and demand.

Sometime, this summer or later, Canada will come out on the other side of the coronavirus crisis, with Alberta avoiding the steep losses of life experienced elsewhere. But the long-prosperous province will be the epicentre of the economic crisis that follows.